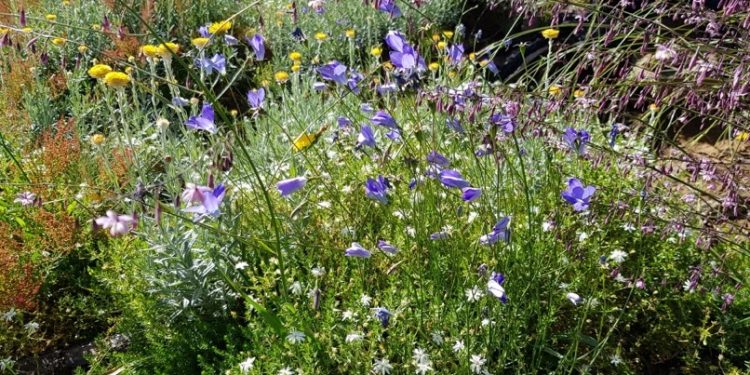 In this new post, Pieter Arnold, Research Fellow at The Australian National University (ANU), presents his latest work ‘Patterns of phenotypic plasticity along a thermal gradient differ by trait type in an alpine plant’. Pieter discusses the challenges of his group’s experimental design, highlights the importance of looking at plants along their entire life cycle, and also advises everyone to expand their horizons when looking for advice!

Climate change is occurring at a relatively rapid pace, generating widespread concern that plants will face considerable challenges in the future. While there are many sources of change in the environment—along with the multiplicative stresses that will be wrought by climate change—some of the major limitations for seed germination and plant growth are increasing average temperatures, as well as increasingly extreme temperatures. The ability of plants to respond plastically to such environmental changes—and to maintain function and fitness under such a range of conditions—is important, particularly in inherently extreme places such as alpine environments. Alpine plants have adapted to these harsh and changeable conditions, but the rapid pace of climate change is throwing up additional challenges.

We wanted to understand how an endemic Australian alpine plant (Wahlenbergia ceracea, waxy bluebell) responds to a range of temperatures. We assessed this by focussing on a set of diverse functional traits across different life stages. The ability for a plant to change the expression of its traits in response to different environments—called plasticity—is often measured in just a few conditions—such as a low and high temperature—and represented as a linear change. However, plasticity is likely to be far more complex and not a straightforward linear response, depending on the trait type and the extent of the environmental range in question. Plasticity is also frequently assumed to be an adaptive response (in that it increases or is directly beneficial for fitness); however, direct evidence for this is scarce.

To test these fundamental ideas about plasticity—whilst also investigating the capacity for our plants to cope with, and respond to, temperature stress—we used a temperature gradient plate. It looks much like a cubic chest freezer with a large flat metal surface that is cooled at one end and heated at the other, thereby generating a gradient of temperatures across the plate. This equipment is usually used for seed germination experiments, but we found that small plants could be grown in it too. Using this, we germinated seeds and also grew small plants in tins to expose them to a wide range of temperatures in a small space.

We measured a range of traits and analysed their responses to the temperature gradient. We sought to evaluate whether their responses were non-linear, whether trait types responded differently (and what the implications of this would be), and how genetic relatedness contributes to variation in plasticity. Our paper comprehensively demonstrates that many traits have non-linear responses to temperature that vary considerably depending on the trait. We found that germination, leaf, and reproductive traits generally had non-linear responses to temperatures with optimal temperature windows. Physiological traits, including thermal tolerance limits, were generally much less responsive to temperature, but heat tolerance did improve at high temperatures. Heat tolerance was high enough that leaves may not become damaged even under some of the highest projected temperatures, but this likely relies on water being available to the plant. We think these high tolerance limits may facilitate plants to function at high temperatures, even though growth and reproduction suffer at these temperatures.

Our research contributes to the wide array of studies on phenotypic plasticity and responses to climate change, including appropriate statistical analyses for complex trait responses to environmental change. Fundamental questions about phenotypic plasticity still stand after decades of research, and we think that our findings are important as they demonstrate that plasticity really isn’t that simple—plastic responses are often non-linear and strongly depend on the trait in question. Quantifying the genetic contribution to plasticity is clearly important for understanding whether plasticity can contribute to adaptive changes in the face of climate change. However, here we found that genetic differences contributed more to germination responses but less to traits in adult plants, showing that life stage is another crucial component of the plasticity puzzle.

Growing plants in the temperature gradient plate is, to the best of our knowledge, a unique application of equipment that is usually only used for seed germination. This required some interesting problem solving and modifications to ensure that all plants had adequate room to grow to flowering stage, even light distribution, and regulated humidity and watering regimes. This had to be maintained so that the only treatment applied was growth temperature. We overcame these problems and were able to concurrently expose 144 plants to 12 temperatures at once in the space of about one cubic metre.

While setting this experiment up and concurrently measuring many traits had its challenges, the biggest hurdle was analysis. We spent a long time exploring and analysing the data to effectively test for the most appropriate model for each trait, including non-linear responses to temperature, while also incorporating experimental block differences, spatial differences within the temperature gradient plate, and quantifying the contributions of maternal effects and genetic variation to plasticity from a structured pedigree.

The big fundamental questions of whether plasticity is adaptive, heritable, and can itself evolve, still requires more investigation. However, we are working on addressing these by using glasshouse experiments. Additionally, whether other stressors in combination with temperature (such as drought) limit or enhance plastic responses is currently still under investigation. An important outcome from our broader research agenda on W. ceracea and temperature stress is that temperature during seed development, seed germination, and early seedling stage is crucial for understanding the true impact of temperature on fitness. In general, we have found that reproductive and early life stages are most vulnerable to temperature stress, and these need further attention in ecological and evolutionary studies on plasticity and tolerance. These life stages may limit effective responses to climate change in some species and may also be a key opportunity for research and conservation action.

I am a Research Fellow at The Australian National University (ANU), Australia, where I study evolutionary ecology and ecophysiology of plants and their response to stress related to global change (such as temperature and drought). I have always had a passion for the natural world, wanting to better understand organisms and preserve the values of ecosystems in which they reside. I was inspired by growing up in the Australian bush, my parents who were passionate about the environment and plants, and many undergraduate ecology lecturers. My Honours and PhD supervisor Prof. Craig White has been a great source of inspiration for my career, both in imparting good research principles for studying organisms from ecophysiological and evolutionary perspectives, and for approaching supervision and collaboration with openness, care, and consideration. Craig is also to thank for me learning R early on, preparing me to tackle complex statistical challenges, such as those we encountered in this study!

I completed this study as part of my postdoc project. This was funded by an Australian Research Council Discovery Project on multi-trait plasticity awarded to my advisors, Prof. Loeske Kruuk and Prof. Adrienne Nicotra. I was glad to conduct the study with other great collaborators: Alexandra Catling (Honours student during the study) and Shuo Wang (PhD student during the study). However, part of our study was also disrupted by lockdowns resulting from the global pandemic, which followed a major hailstorm only two months prior. This extreme weather event badly affected another huge experiment we were running (see here for some more insight into that!). It was unfortunate that our studies on the impacts of climate change on plants were directly affected by an extreme event likely exacerbated by climatic changes. However, we were very fortunate to have the ANU Plant Services Team and many kind people from our network of collaborators and colleagues to help us get back on track after the hailstorm damage. With that in mind, a piece of advice I could give to budding ecologists is to seek inspiration and collaboration from a diverse range of people. Listen to their opinions and experiences, share your knowledge and expertise, and find ways that you can be useful to others. Building on each other’s strengths and working together is reciprocally beneficial, resulting in personal and professional growth, better science, and extra helping hands for big experiments or in tough situations!

Engineering value: The returns to technological talent and investments in artificial intelligence