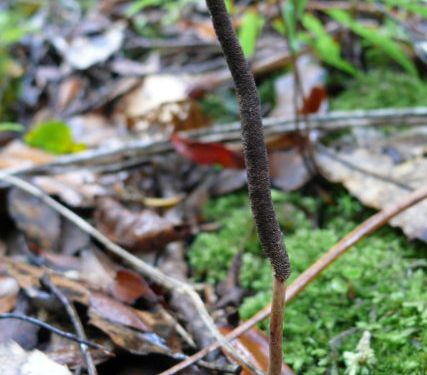 Awheto, often known as the ‘Vegetable Caterpillar’, is a fascinating structure that is produced when a fungus (Ophiocordyceps robertsii) takes over the body of a moth (Dumbletonius characterifer). It produces an amazing structure, of which only a small amount can be observed above ground. The fruiting body (stroma) is the only visible part of the structure that can be seen amongst forest litter. You need to have an eye for it as it can be easily mistaken for a stick!

The stroma of awheto above leaf litter on the forest floor. CC-BY-NC Chris Ecroyd, iNaturalist NZ.

The first time I went out searching for it, I must have looked for over an hour and could not spot a single one, knowing full well they were in the area!

Awheto was traditionally used in Māori culture as a food source, in medicine, and in the process of making ink for ta moko (Māori tattooing). The awheto (originally a brown colour) was removed from the ground and burnt. When burnt, unlike wood that turns greyish, awheto turns black. The burnt awheto was then ground into a black powder that was then combined with bird fat to create the black pigment used in tattooing.

Awheto is a delicacy in Asia and is highly important in Tibetan and Chinese medicine, although it is not the exact same fungal species as in NZ. Asia has a related species of fungus, Ophiocordyceps sinensis. Now when I say this is highly important, I mean it! They even have statues of the awheto that are displayed widely! The awheto is used as an aphrodisiac and is used to treat a range of illness from fatigue to cancer. There is an indication that the fungus contains substances that are an active ingredient in pharmaceuticals.

Unfortunately, the awheto has been harvested in high, unsustainable numbers, resulting in it being regarded as one of the highest processed, natural, biological products in the world. This has raised the worth of awheto to unbelievable amounts per kg. One kg is valued at between $65,425 NZD, and $128,851 NZD, meaning just one gram is worth between $65.425 NZD and $128.851 NZD.

Awheto is the new gold? I think yes!

A 2021 study by Seona Casonato and Gary Hill looked at how the fungus (O. robertsii) was able to grow, when the growth medium (agar) had minor changes and/or additions. Growth medium can contain different types and/or amounts of compounds that can influence the growth of the fungus. The growth medium used in this study was potato dextrose agar (PDA). Changes to the growth medium in one experiment included adding yeast, whilst in another was a reduced concentration of the PDA. As well as these changes to the growth medium, things such as ground up fungi, leaf litter, soil, hinau leaves, seeds, roots, and berries (as well as combinations of all of these) were added to the medium to look at any effect on the fungal growth.

Seona’s research provided further knowledge to assist in developing methods to grow the fungi and to perhaps allow commercial harvesting of awheto. The research specifically looked at the interaction between hinau trees and awheto. This was because initial observations suggested awheto were associated with hinau trees.

Samples in the reduced concentration PDA with the addition of leaf litter, seeds, berries and soil resulted in an increase in the growth of the fungus. However, the main effect in both experiments was with the addition of the hinau leaves. The addition of the leaves caused a significant reduction, or complete lack of growth, in the fungi. Further research indicated that this lack of growth is most likely due to compounds within the leaves, such as methanol and acetone as well as the leaves having antibacterial properties that can inhibit growth.

The research didn’t help with understanding the interaction under field conditions between hinau and awheto. However, the results created a question: does the occurrence of hinau and awheto have any correlation? Additional detailed observations are required to determine if there is any relationship between O. robertsii, or the host moth, and hinau trees.

There is limited knowledge on the biology of the fungi and the host moth, as well as their interaction, but there is a great opportunity to create a niche market with local iwi to eventually be able to develop fungi on site (in situ) to then be sold overseas. And then the ‘gold’ rush can begin!

The author Megan Cambus is a postgraduate student in the Masters of Science taught at Lincoln University. She wrote this article as part of his assessment for ECOL 608 Research Methods in Ecology

Six Steps to Responsible AI in the Federal Government

The Workhouse of the Early Court