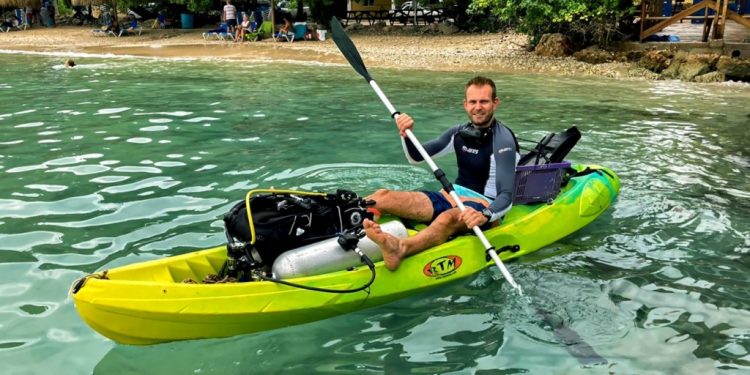 In this new post, Benjamin Mueller, a postdoctoral researcher at the University of Amsterdam, The Netherlands, and the University of Hawai’i at Manoa, USA, discusses his recently accepted paper, “Nocturnal dissolved organic matter release by turf algae and its role in the microbialization of reefs,” and warns against discarding results that go against expectations.

Our paper sheds light on the role of nocturnal release of dissolved organic matter (DOM) by turf algae and explores its potential role in ecosystem functioning. We quantified DOM release during the day and at night, and tested whether the produced DOM differed in its utilization by bacterioplankton. We wanted to further investigate how changes in benthic community composition—from coral- to algal- and cyanobacterial-dominance—over the past four decades may have affected reef-wide DOM release on a Caribbean coral reef. To achieve this, we estimated the day- and night-DOM release on a reef site in 1973 compared to 2013.

Turf algae are mixtures of different algal types—often including cyanobacteria that form dense carpets of < 1cm height. They are known to be prevalent on many coral reefs world-wide and release large amounts of DOM during the day. Thus, they are considered to be major contributors to the DOM pool on reefs. Algae generally release more DOM than corals and algal-DOM appears to stimulate the fast but inefficient growth of bacteria in the water column—a phenomenon referred to as the “microbialization of reefs”. Moreover, DOM release may help turf algae to overgrow neighbouring corals: Algal-DOM fuels the growth and respiration of potentially pathogenic microbes in coral-turf algal interfaces, causing hypoxic zones and inducing coral diseases. Weakened corals can then be more easily over-grown and turf algae are then able to advance further.

The study was conceived during my PhD where I investigated the effect of light on DOM release in several coral and algal species. Since photosynthesis is driven by light, it was widely assumed that DOM release is strongly reduced or even ceases at night. As expected, DOM release was strongly reduced in the dark, and more DOM was released under high, compared to moderate, light intensities. However, I was very surprised that with regards to turf algae, the highest release rates were observed in the dark! Initially, I thought that we made a mistake. I thought that somehow the samples must have been contaminated, or something went wrong with the chemical analysis. And so, I excluded the results of the dark treatment from the initial experiment. Shortly after, we found that cyanobacteria mats similarly released more DOM during the night compared to the day. Closely related cyanobacteria from hot springs and mudflats have been reported to store photosynthates produced during the day and ferment them at night, resulting in the release of fermentation products as DOM at night. Interestingly, cyanobacteria of the same genus contribute 20–50% to the total biomass of turf algal communities at our study site on Curaçao. Therefore, I started wondering if the release of fermentation products could also explain the high dark release rates I found in turf algae? I therefore gathered a diverse team of researchers from the Netherlands, Germany, and the United States and we started to investigate the phenomenon.

The novelty of this paper is due to the fact that, as diurnal beings—and due to logistical constrains—coral reef research is primarily conducted during the day, with processes occurring at night receive much less attention. This is only the second paper which posits fermentation as the source of substantial DOM release on coral reefs. Here, for the first time, the presented results further indicate that night-DOM released by turf algae is processed very differently by bacterioplankton compared to day-DOM; thus suggesting a difference in the composition of the two DOM types. These findings are, however, in contrast to Kelly et al. 2022, who recently reported similar day- and night-DOM release rates for a variety of corals and algae with no major differences in the composition between day- and night-DOM. This warrants further research to solve this conundrum.

Night-DOM is consumed by bacterioplankton 2× faster compared to day-DOM, yet 4× more DOM is required to produce a comparable amount of bacterial biomass. Thus, night-DOM is likely to significantly contribute to the microbialization of reefs: (1) By increasing the competitiveness of turf algae, which solidifies or even accelerates the underlying benthic community shift from corals to algae and cyanobacterial mats; and (2) By further stimulating respiration in microbial communities at the expense of transfer of energy and nutrients through the microbial loop to higher trophic levels. Moreover, turf algal communities containing cyanobacteria capable of fermenting organic material—and thereby potentially releasing DOM at night—are not restricted to coral reefs, but instead are major components in a variety of intertidal and subtidal rocky habitats ranging from tropical, to temperate, and even polar latitudes. In addition, mat-forming cyanobacteria are also found in marine and freshwater soft bottom habitats. Thus, night-DOM release might be a wide-spread, but so far largely overlooked, phenomenon in many benthic ecosystems.

The major challenge we faced when conducting the study were the logistics. We had only four flow chambers and therefore had to find a way how to perform all day and night incubations in the shortest time possible, whilst not interfering with the circadian cycle of the turf algae. In the end, we managed to alternate three day and four night incubation days spread out over a period of 10 days. After those ten days everyone was happy to get some proper sleep again!

By now all evidence points towards dark fermentation of organic material as the source of night-DOM release in turf algae and cyanobacterial mats. However, to ultimately prove this hypothesis, it is necessary to identify actual fermentation products in night-DOM and/or use a known inhibitor to block fermentation processes. To date, ecological research into dark fermentation by cyanobacteria has largely been focused on the energy-providing mechanism enabling these organisms to survive and grow under dark and anaerobic conditions. Yet, the potential effect of the subsequent release of fermentation products as night-DOM on community dynamics and ecosystem processes in coral reefs, and other benthic habitats, remains to be investigated. Our estimates suggest that, on a Caribbean coral reef, up to 50% of the DOM release occurs at night. The relative importance of night-DOM is likely to further increase in the future as climate change has been predicted to promote the abundance of mat-forming cyanobacteria and turf algal communities, as well as the prevalence of cyanobacteria within turf algal communities.

But the story doesn’t end there. Recent advancements in DOM analyses techniques now allow us to not only measure the carbon or nitrogen content of DOM, but to resolve specific molecules or molecule groups. Knowing the composition of day-and night-DOM may help to resolve the origin and underlying mechanism of DOM production. Moreover, next to bacteria, sponges are the other key DOM consumers on coral reefs and in many other benthic habitats. How sponges utilize night-DOM in comparison to day-DOM will be crucial to elucidate the potential ecosystem effects of increased night-DOM release predicted in climate change models.

I am currently a Marie Skłodowska-Curie fellow at the University of Amsterdam, Netherlands, and the University of Hawai’i at Manoa, USA. My main study focus is to combine multiple analyses techniques (including hr LC-MS/MS, HPLC, fDOM) to characterize DOM produced by different corals and algae, and investigate which DOM components are utilized by bacterioplankton and sponges, respectively.

My greatest inspiration is nature itself. I am fortunate enough to have observed the coral reefs of Curaçao for the past 12 years, often conducting research for months at a time. This allowed me to get an impression about natural fluctuations in the system that repeat themselves periodically in comparison to newly occurring phenomena. Knowing one ecosystem very well allowed me to recognize similarities but also fundamental differences when exploring other systems such as coral reefs in other areas, but also kelp forests or deep-sea habitats.

My best advice for other ecologists is to always stay curious and never disregard unexpected results too quickly. It is essential to be critical of your data, especially if they contradict the current state of knowledge; however, it might be that you are onto something that may change an existing paradigm!