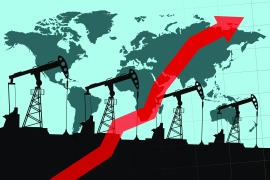 The Russian invasion of Ukraine has triggered significant disruptions to the supply of commodities such as energy and food, of which Russia and Ukraine are key exporters. The war exacerbated existing pandemic-related stress in commodity markets, which had arisen due to supply chain disruptions, weak investment in energy production, and a rapid rebound in global demand. Most commodity prices have seen sharp increases over the past year, with some reaching all-time highs, which has contributed to the global rise in inflation.

Wars, pandemics, and global recessions have repeatedly impacted commodity markets throughout history. These events can have longer-term consequences, since prolonged periods of very high (or low) commodity prices can trigger permanent changes in the behavior of consumers and producers, often intensified by poor government policies.

An analysis of two previous episodes of major shocks, the oil and food price increases of the 1970s and the broad-based commodity price boom in the 2000s, can shed light on how the war in Ukraine may affect commodity markets. During the first oil price shock in 1974, prices rose fivefold in one year, while they tripled during the 1979 oil price spike, reaching a high of $151 per barrel of crude oil in real 2022 prices (Figure 1). During the 2000s, oil prices peaked at $171 per barrel in real terms in mid-2008 and averaged $120 per barrel between 2010-14. Oil prices today remain below these peaks, but some other energy commodities have reached all-time highs.

This blog argues that market adjustments alongside certain government policies to improve energy efficiency and boost energy production can resolve commodity market imbalances, although this process can be prolonged. At present, however, government policies have focused on fuel subsidies and tax breaks which can exacerbate price pressures by sustaining high demand.

Demand reduction. Between 1979 and 1983, global oil demand fell by 11 percent, and in advanced economies it shrank by almost 20 percent. Part of the fall was due to the global recession in 1982, as well as consumers using less oil. Higher prices also led to changes in consumer preferences—in the United States, consumers purchased more Japanese cars which had higher fuel efficiency than U.S. cars. Underlying demand growth was permanently lowered by improvements in energy efficiency and substitution to other fuels. High oil prices in the 2000s also induced efficiency improvements in the use of oil.

Substitution. In the five years after the 1979 oil price shock, the share of crude oil in energy consumption in OECD countries fell by 7 percentage points (Figure 2). This was chiefly due to the shift away from oil-powered electricity power stations toward nuclear and coal. Among agriculture, substitution has been common on the production side—high prices of one commodity, such as soybeans, incentivize farmers to grow soybeans rather than other crops such as wheat.

New sources of production. High oil prices in the 1970s incentivized the growth of oil production from high-cost sources including Prudhoe Bay in Alaska and the North Sea fields of the United Kingdom and Norway (Figure 3.A). Production of other fuels, such as coal, also increased. High and stable prices in the 2000s facilitated the development of alternative crude oil sources, including U.S. shale oil. For food, high prices during the 1970s brought new supplies from South America, notably Argentina and Brazil (Figure 3.B).

Rising oil prices through the 1970s triggered a range of policy responses, which interacted with market mechanisms. In the United States, price controls on oil (which had first been imposed in 1971) contributed to shortages of oil products and were followed by the implementation of fuel allocation programs. These likely exacerbated shortages of oil and distorted markets.

Some other policies were more successful. For example, several OECD members set up the International Energy Agency in 1974 to safeguard oil supplies under an emergency oil sharing system (including the creation of national oil reserves), and to promote common policymaking and data collection and analysis. Other policies included the phasing out of oil-fired electricity plants in favor of coal, while the United States also introduced fuel economy standards for cars.

Policies were also implemented in the 2000s. The United States passed legislation in 2005 and 2007 aimed at reducing energy demand and boosting production. Demand-side measures included fiscal incentives to improve energy efficiency in vehicles and housing. Supply-side measures included a mandate to increase the use of biofuels, the establishment of renewable fuel standards, and tax incentives for energy production and loan guarantees for zero-carbon technologies. Other countries adopted similar policies. For food, the G-20 established the Agricultural Marketing Information System in 2011 to enhance transparency and policy coordination.

The lessons from previous commodity shocks suggest that a combination of appropriate government policies together with market adjustments can reduce the tension in commodity markets. Measures to promote energy efficiency and boost the supply of energy helped resolve the demand and supply imbalance after the 1970s oil shocks, while high prices led to lower consumer demand for oil and changes in consumer behavior, including the shift to more efficient vehicles. These lessons would suggest that countries should focus policies on promoting energy efficiency and encouraging the production of energy, preferably using reliable sources of low-carbon energy, rather than on distorting fuel subsidies. Key steps on food commodities could include measures to promote the efficient use of inputs such as fertilizers, along with reducing food waste, and easing biofuel mandates.

How sharp will be the global slowdown?

How sharp will be the global slowdown?

Credit, crises, and infrastructure: The differing fates of large and small businesses

The Scheme behind the Great Reset