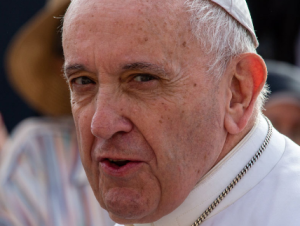 Pope Francis has been advocating for peace between Ukraine and Russia. He has condemned Russia’s “brutality” and said he believes Putin miscalculated the duration of the war. “They encountered a brave people, a people who are struggling to survive and who have a history of struggle,” he said. Yet the Pope is now coming under pressure for suggesting that the war could have been avoided. No one has more “behind the curtain” information than the Vatican.

Before Russia invaded Ukraine on February 24, there were signs that NATO and Ukraine were “barking at the gates of Russia.” Even the Pope has admitted the West was eager for war profits and that the conflict was “either provoked or not prevented.”

The head of the Catholic Church stated: “But the danger is that we only see this, which is monstrous, and we do not see the whole drama unfolding behind this war, which was perhaps somehow either provoked or not prevented. And note the interest in testing and selling weapons. It is very sad, but at the end of the day that is what is at stake,” he added. This is not a matter of “good and bad” as the “roots and interests [are] very complex.”

Furthermore, Pope Francis met with an unnamed Russian head of state shortly before the war began. He noted, as I have reported, that Russia was fearful of an imminent attack. “Yet here the situation is even more complex due to the direct intervention of a ‘superpower’ aimed at imposing its own will in violation of the principle of the self-determination of peoples,” he explained. This war is far more complex than Russia v Ukraine. It has become a proxy war instigated by NATO.

Russia Gas to Europe to Stop

Russia Gas to Europe to Stop

Financing for sustainable development is clogged

Bourdain by Laurie Woolever: A Review