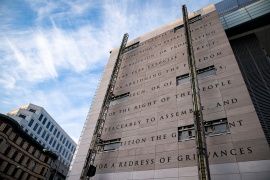 A wall stating the First Amendment of the U.S. Constitution is seen on the recently closed Newseum, in Washington, U.S., February 21, 2021. REUTERS/Al Drago

The contours of acceptable online speech, and the appropriate mechanisms to ensure meaningful online communities, are among the most contentious policy debates in America today. Moderating content that is not per se illegal but that likely creates significant harm has proven particularly divisive. Many on the left insist digital platforms haven’t done enough to combat hate speech, misinformation, and other potentially harmful material, while many on the right argue that platforms are doing far too much—to the point where “Big Tech” is censoring legitimate speech and effectively infringing on Americans’ fundamental rights. As Congress weighs new regulation for digital platforms, and as states like Texas and Florida create social media legislation of their own, the importance and urgency of the issue is only set to grow.

Yet unfortunately the debate over free speech online is also being shaped by fundamentally incorrect understandings of the First Amendment. As the law stands, platforms are private entities with their own speech rights; hosting content is not a traditional government role that makes a private actor subject to First Amendment constraints. Nonetheless, many Americans erroneously believe that the content-moderation decisions of digital platforms violate ordinary people’s constitutionally guaranteed speech rights. With policymakers at all levels of government working to address a diverse set of harms associated with platforms, the electorate’s mistaken beliefs about the First Amendment could add to the political and economic challenges of building better online speech governance.

To better understand the challenges facing content moderation regimes and building public support for them, l designed a survey experiment to address the following:

Since survey participants received the educational intervention at random, we can draw strong inferences that exposure to the educational intervention reduced support for content moderation, at least for individuals who identify as Republican. Such backfire effects have been documented across a wide range of domains and are often linked to partisan affiliations. Although the results are consistent with that literature, they also highlight a broader concern: Targeted interventions can backfire on judgments distinct from those directly targeted by the intervention. In this case, an intervention about the Constitution modified support for content moderation.

There are a number of plausible explanations for this backfire effect. For example, it could be that Republicans show a backfire effect precisely because they are made aware through the educational intervention that privately hosted digital venues lack constitutional protections. Put differently, Republicans may be more likely to have constitutional misunderstandings that make them comfortable with content moderation and are also therefore more likely to shift their opinion against content moderation when exposed to a targeted education. It would make sense for respondents to reduce their support for content moderation once they find that there is less legal recourse than expected when such moderation becomes oppressive. In other words, it is reasonable to be more skeptical of private decisions about content moderation once one becomes aware that the legal protections for online speech rights are less than one had previously assumed.

We could speculate that the results may also suggest an explanation for a trend in recent polling, which suggests that support for more regulation of tech companies is waning, particularly among Republicans. Could it be that the public has grown more aware of the constitutional limits of what the government can feasibly regulate and therefore more skeptical of proposed regulatory measures? The effects of increased constitutional awareness may be unintuitive and unpredictable, and my findings may generalize to explain how the public judges proposed lawmaking to regulate platforms (future work would have to confirm this speculation).

Indeed, such a strategy is particularly important given that inaccurate beliefs about the First Amendment are not the only misapprehension present in debates about content moderation. For example, Republican politicians and the American public alike express the belief that platform moderation practices favor liberal messaging, despite strong empirical evidence to the contrary. Many Americans likely hold such views at least in part due to strategically misleading claims by prominent politicians and media figures, a particularly worrying form of misinformation. Any effort to improve popular understandings of the First Amendment will therefore need to build on related strategies for countering widespread political misinformation.

The road to broad support for content moderation—and by extension, a safe and usable online environment—is likely to be long. Yet if we’re ever to arrive at better governance of online speech, we need to get our facts straight first.

Aileen Nielsen is a Ph.D. student at ETH Zurich’s Center for Law & Economics Center and a fellow in Law & Tech.

Climate Change the Tool of Control