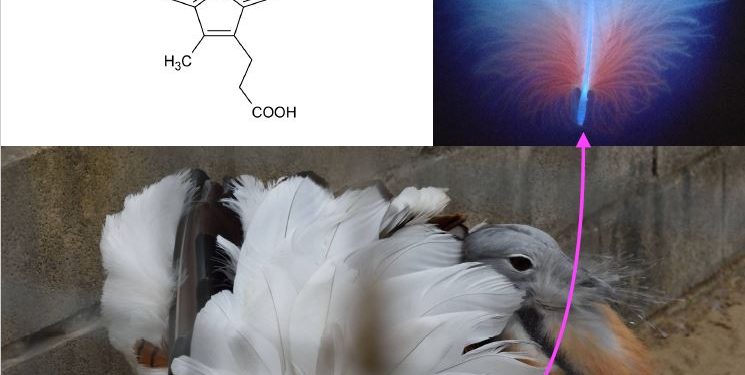 Ismael Galván of National Museum of Natural Sciences (Spain) uncovers to exciting role of porphyrin colouration and what it might mean in an ecological setting.

Few things in nature are as diverse and striking as the colour of animals. We know many of the roles of these colours. But when we consider the whole diversity of mechanisms that produce them, it is easy to realise that a world to discover is in front of us.

This happens when taking biological pigments, molecules that absorb light in a specific region of the electronic spectrum that we (or any other organism) can perceive. Pigments can be grouped into three categories on the basis of their synthesis pathway. The most intensively studied pigments, namely melanins and carotenoids, belong to the shikimic and mevalonic routes, so called because their precursor metabolites are the shikimic and mevalonic acids (Gudin 2003).

But there is a third metabolic route, so called levulinic, that has been overlooked as a significant contributor to animal colouration until recently. The reason is that this route leads to the best known pigments in plants (the chlorophylls), but to pigments that stay most of the time in the internal environment in animals: porphyrins. The best known porphyrin is heme, responsible for the red colour of blood hemoglobin. Before the synthesis of heme, which takes place in virtually all cells in vertebrates, the route produces different porphyrins as intermediates. These usually do not come out of cells. Only during the course of certain porphyrias – diseases caused by the impairment of the conversion of porphyrin intermediates – do these pigments accumulate in the skin.

The internal metabolic nature of porphyrins in humans led to oversight of their role in animal colouration. But wild animals often come with surprises. In 1937, it was discovered that the bones of the fox squirrel Sciurus niger are pink because they accumulate a porphyrin (Turner 1937), for which the species was proposed as a model for human congenital erythropoietic porphyria (Levin and Flyger 1971). Fox squirrels, however, accumulate porphyrin in healthy conditions, suggesting an adaptive role. Porphyrins were also found in the external body surface of some birds, but with some difficulty in defining this as a colour trait. The reason is that porphyrins exhibit intense pink or purple colours because they are highly conjugated aromatic rings that strongly absorb visible light, and also fluoresce under UV light (Figure 1). It is the red fluorescence of feathers induced by UV lamps that revealed the presence of porphyrins (Figure 1), mostly observed among bustards, owls and nightjars (Völker 1938). If not illuminated with UV, porphyrin-containing feathers normally look grey (Figure 1).

Top left: the beautiful chemical structure of porphyrins, here exemplified by coproporphyrin III, consists of a highly conjugated aromatic ring, prone to strongly absorb light and also to breakage. Bottom: the grey feathers of a male great bustard in courtship display reveal the presence of porphyrins. Top right: even after degradation, the porhyrins in these feathers continue exhibiting intense red fluorescence when illuminated with a UV lamp. Photo credits: Ismael Galván.

The pink colour of porphyrins is observed in squirrel bones but not in bird feathers because the aromatic rings are very prone to breakage under UV light, so that sunlight degrades them. This is probably why porphyrins were thought not to be relevant contributors to animal colouration. Cramp et al. (1979) already described a pinkish colouration in the feathers of bustards, but it was not until 2016 that this was characterised as porphyrin-based (Galván et al. 2016). The pink colour of porphyrins can be clearly seen at the base of the body feathers of bustards under conventional light, but only briefly, because it degrades in minutes of exposure to sun and then becomes grey (see video of this degradation here). This led to suggest that female great bustards Otis tarda examine the plumage of their potential mates during courtship to determine how long they have been exhibiting (which may inform about how many copulates they have previously had), as the pink colour of porphyrins should be visible only in the beginning of a male’s courtship activity (Galván et al. 2016).

Out of bustards, however, the pink colour of undegraded porphyrins has probably never been observed, nor even in owls, which deposit high amounts of porphyrins in their feathers (Galván et al. 2018). Maybe we have to look at these birds more carefully. Now that we know that porphyrins are there and can potentially provide striking colour (not only to bustards, owls and nightjars), a more detailed scrutiny of these ephemeral colour traits is necessary. New functions of animal colouration may be elucidated.

A male great bustard displaying at dawn, when ambient light is richest in UV wavelengths, in Extremadura, Spain. The insert photo shows the pink colour of still undegraded porphyrins at the base of body feathers of a captive male bustard. Photo credits: Ismael Galván.

Regardless of the perceptible colour of undegraded porphyrins, their occurrence in the feathers of wild birds make these animals unique models that may potentially provide novel solutions for human porphyrias (Neves and Galván 2020). But grey degraded porphyrins still raise many questions, because they continue fluorescing under UV light. This intriguing fluorescence is not exclusive to birds, as it has recently been reported in the pelage of New World flying squirrels (Kohler et al. 2019) and springhares (Olson et al. 2021). One of these questions is if porphyrin fluorescence plays any communication role in these animals. In this regard, it is noticeable that animals depositing porphyrins in their external body surface seem to be nocturnal or mainly active at dawn or dusk. Spike et al. (1992) already associated porphyrin production to nocturnal life in relation to the Harderian gland of rodents, a gland that secretes a lipid solution containing porphyrins to the eye. As fluorescence produces a conversion of short-wavelength (UV) into longer-wavelength light (visible red), Spike et al. (1992) proposed that a thin film of porphyrins in the eye may increase the amount of usable light reaching the retina, which may be particularly relevant precisely in early morning and late evening, when the proportion of UV wavelengths in the ambient light is highest (Håstad and Ödeen 2014) (Figure 2). In other words, porphyrins in the eye may facilitate vision in crepuscular animals. However, and despite Harderian glands occur in birds, the fluorescence of feather porphyrins is not likely to affect the vision of bustards, owls or nightjars, and the same can be said of the hair porphyrins of flying squirrels. Or maybe the fluorescence of the whole body does actually reach their eyes and improve their nocturnal vision? Alternatively, these animals may be sensitive to the slight fluorescence that porphyrins naturally produce under solar radiation, perceive it in others and use it with any communication purpose.

In conclusion, porphyrins are relevant for the colour of animals, at least birds and mammals, but their occurrence and function both as intact (pink colour) and fluorescing pigments (red colour) still remain a mystery. Porphyrins are old pigments claiming for novel thoughts.

Why are some plants and animals more colourful than others?

PRIVATE BLOG – US Share Markets For Close of March

AI, innovation, and welfare: A conversation with Joseph E. Stiglitz

Javiera Benavente: Scaling of metabolism and excretion along a temperature gradient