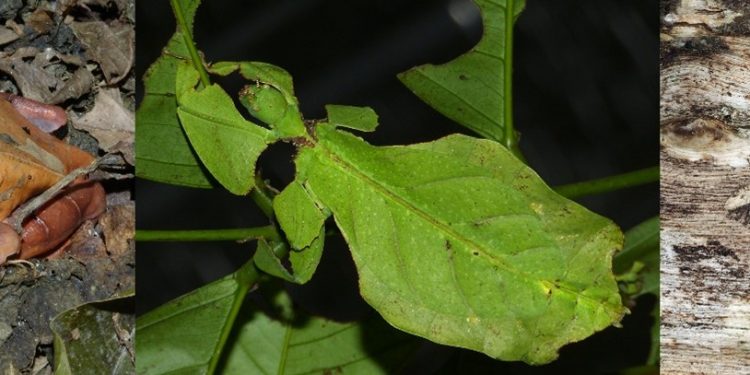 Our cover story for January 2022 is all about the dazzling world of mirror camouflage. Amanda Franklin of University of Melbourne tells us about her latest research “Cracks in the mirror hypothesis: High specularity does not reduce detection or predation risk” and explains why all may not be as it seems.

How can an animal make itself invisible? Perhaps by perfectly mimicking a leaf or a twig, such as some frogs or stick insects. Or maybe by matching the colour and texture of the background, such as some moths. But, what about using a mirror to reflect the surrounding environment to improve match with the background? In the open ocean this can work, but, according to our new research, it doesn’t work on land.

A frog and a leaf insect that look likes leaves, and a moth that matches the bark background in colour and pattern (all image Wikimedia Commons).

It has been suggested that mirror-like animals are hard to see because they blend into the background. The idea is that these animals reflect the surrounding environment and this helps them match the background. For example, silvery fish blend into the blue background of the open ocean by reflecting the blue water. In terrestrial environments, reflecting the surrounding environment could allow mirror-like animals to improve camouflage on a range of different backgrounds. But this idea has never been tested.

With a top-notch team, I set out to test these predictions. We are a group of scientists at the University of Melbourne and Royal Melbourne Institute of Technology (RMIT) who are interested in the evolution and function of animal colouration and vision. So, trying to work out the function of a mirror-like appearance is right up our alley! We wanted to test this prediction with two experiments: one with human participants and one with birds as predators. With humans, it is possible to instruct participants to complete a specific task, so we can be sure we are testing whether a mirror-like appearance decreases detectability. It isn’t possible to give birds instructions like we can with people. But, birds are natural predators in the wild, so it’s essential to also investigate the response of birds to mirror-like prey.

Some of the failed attempts at making mirror-like replica beetles.

For both experiments, we needed to create artificial mirror-like and matte prey. This turned out to be a huge endeavour! We decided to replicate Australian Christmas beetles. These beetles are common in summer, eaten by birds, and are hugely diverse in appearance (including mirror-like species). To identify bird predation attempts we needed a soft material, such as clay. But to create a mirror-like effect we needed an ultrasmooth surface, such as plastic. In the end, to meet both requirements, we covered clay beetle models with a thin layer of resin. Then, to create a matte effect, we roughened the resin surface by sanding half the beetles. Finally, we could paint the models to create the final product. We ended up making over 1500 of these beetle models!

With the beetle models made, it was time to run the experiments. For the human participants, we hid 6 mirror-like and 6 matte replica beetles in a small patch of forest. Each participant wore eye-tracking glasses and were asked to find the replica beetles as quickly as possible. The eye tracking glasses let us know where the participant was looking and precise detection times for each beetle. It turned out that both the mirror and matte beetles were equally easy to find. There was no difference between the total number of mirror and matte beetles found or the time to detect each type of beetle.

Next, it was on to the bird predation experiment. For this experiment, we put out hundreds of beetle replicas into the forest and then monitored bird predation attempts for 6 days. Using clay meant that we could see beak marks or teeth marks, so we could distinguish between birds, rodents or other attacks. Again, we found no difference in bird attacks on mirror or matte replica beetles.

Beetle replicas with a bird predation attempt (left) indicated by the beak marks across the wings and head and a rodent (right) indicated with the incisor teeth marks in the clay.

Read the research in full here