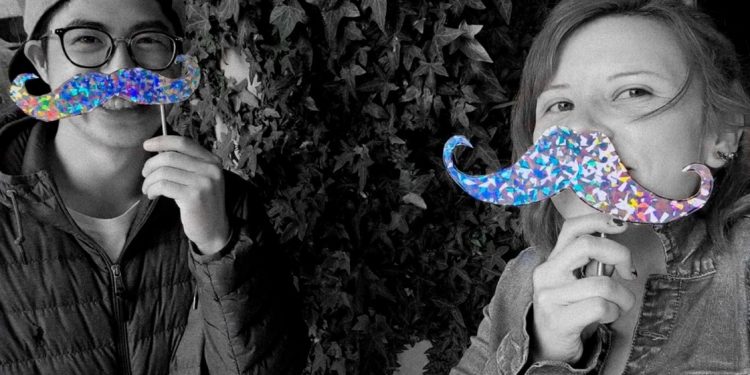 Roses are red, violets are blue… but being only one colour is boring, isn’t it? Nature seems to think so – many organisms have evolved dazzling iridescent surfaces which change colour like soap bubbles and DVDs. This is different to actively changing colours like chameleons or cuttlefish do – iridescence is the zenith of multitasking, allowing organisms to be more than one colour at the same time! But when animals wear iridescence, are they sending a message? This question remains a mystery to be solved. What clues can biologists use to crack this case?

To learn why animals choose this colourful fashion statement, we biologists must first examine the scene of the crime: the world of optics! A closer inspection reveals the true nature of our colours – iridescence is a methodical arrangement of light reflections in different angles. Why are roses and violets unable to do this?

The red pigment in the rose acts as a filter: it absorbs all light waves except for the long ‘red’ ones which eventually reach our eyes. And if violets were blue, this colour would be produced by structures acting as mirrors: they are so small that they can ‘force’ specific light waves to align and add up to amplify the short ‘blue’ wavelengths. However, violets are purple. Mix a bit of pigment red and structural blue to create purple, but that only rhymes with “turtle” …

Iridescence needs order. These two butterflies are blue because of the nanostructures in the scales of their wings. The first one, with a messy composition of scales, creates an almost constant shade of blue. The second one, with a careful alignment of scales produces strong iridescence: a collection of angle changing royal blue, sky blue and cyan.

Iridescence can’t be produced by pigments, only with structures. And these structures need to be highly ordered to reflect different wavelengths in specific angles. Still, many animals take advantage of this structural quirk by putting on a runway-worthy show. But why go through the trouble to produce iridescence?

The paradox of iridescent communication

For a time, it was believed that iridescence evolved to send different signals to different receivers. For example, if you were a small beetle you could look leafy green to a predator from above and at the same time look handsomely blue to the eyes of a potential partner sitting next to you…very romantic, but unfortunately too good to be true.

This example assumes that the organism is able to control the angles at which it is seen, and that the shift is discrete between only two distinctive colours. However, iridescent patches change a lot in space and time. If the surface of the patch is curved, multiple colours can be seen simultaneously. If the iridescent patch is moving, the colours may constantly change.

Clearly, iridescent displays can be very hard to manage and can often result in a chaotic appearance more likely to confuse the receiver. This breaks the number one rule for communication: the signal must be reliable and honest! Imagine trying to wait for the green traffic light only to find it constantly shifting to different colours! Thus, for this colourful show to become a signal, the signaller should have a lot of control on the presentation of iridescence.

How should we approach this dilemma?

To understand how iridescence is used by animals we need to remember that it takes two to sparkle. In the past, researchers have mostly focused on iridescence from the signaller’s perspective, but now it’s becoming clear that the role of the observer is just as important. Of course, you can’t understand how traffic lights work without considering the drivers.

The revelation that iridescence perception is importantprovides new clues for biologists to solve this mystery. Just like how animals may display iridescence in different ways, the signal can also be processed differently depending on what the observer can see.

Animals see the world in different ways because of their diverse visual systems. This can affect how they can see and use iridescent colours.

Some animals have such bad spatial resolution that the colours in an iridescent patch may blur together. Others may focus more on the bright flashy reflections disregarding their colour. Some could even miss the colour changes altogether if their vision is too slow! Each case has to be investigated in detail to understand what is happening.

Weaving it all together

By considering the production, presentation and perception of iridescence, biologists can piece together its ecological role. That is, how this optical curiosity is used by different animals in different situations. For example, the Western parotia (birds of paradise) are known for their show-stopping mating ritual:

The iridescent love language is obvious in these birds, but in other cases it can be more of a mystery. Sometimes animals are iridescent but don’t seem to be showing it off, other times the animal is boldly colourful but nobody seems to be watching. Only by following the journey of colours from beginning to end can we fully appreciate the vibrant language of iridescence.

Two animals wear iridescence: Laura (She/her) and Leslie (He/him) are PhD students of the Stuart-Fox lab. Laura is desperately curious about the existence of beautiful shiny things in nature. How organisms have evolved super clever optics tricks to filter, twist, and reflect light to their advantage. Leslie is permanently fascinated by honey bee brain circuits and their learning. From vision to time sensing he uses biology to investigate the philosophical question of what it is like to be a bee.

A collaborative mindset was not just important in the writing of this blog but is also one the best things about this field. It is really exciting to work in a cross-disciplinary team to explore very different perspectives of the same research question. In this way, we could study the physical properties of iridescence, as well as how it might be perceived by non-human animals.

As is normal in science, the “Eureka!” moments are less common than the “???” moments. We were certainly bamboozled by plenty of misbehaving bees during behavioural experiments. These experiments were tricky to design, and we often found ourselves trying to imagine all possible scenarios “through the minds of the bees’’ to predict what kind of responses they would make. We also learnt that measuring iridescence was just as hard as working with live animals. Light is very temperamental and requires a lot of patience to befriend the measuring equipment. Despite these difficulties, we could solve any problem by combining our diverse skill sets, and we look forward to tackling many more colourful mysteries together in the future.

If you want to find out more, check out the paper the paradox of iridescent signals, which we co-authored, and stay tuned for more of our collab work in @laubibianapina (L. Ospina-Rozo) and @beeleslieng (L. Ng).