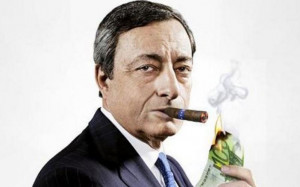 Italian Prime Minister Mario Draghi announced his resignation on Thursday after he fell out of favor with the Five Star Movement. Similar to Boris Johnson, once your own people turn their backs on you, it is time to bow out. “I want to announce that this evening I will present my resignation to the President of the Republic,” Draghi said to the pleasure of many. “Today’s votes in Parliament are very significant from a political point of view. The majority of national unity that has supported this government since its creation is no longer there.”

The people are tired of surging prices, a lowered cost of living, and a tyrant policy toward COVID. Five Star’s leader Giuseppe Conte said, “I have a strong fear that September will be a time when families will face the choice of paying their electricity bill or buying food.” Draghi has been destroying Europe for nearly a decade in various roles. He went from failed European Central Bank Commissioner to the prime minister of Italy in 2021. He was quick to state early in his term that the unvaccinated were not part of Italian society and blamed all of the nation’s woes on the unvaccinated.

I know people who worked on trading desks years ago with Mario Draghi before he was head of the ECB, and even then he was incompetent. His policy of perpetual low to negative interest rates was a barbaric ancient theory based on the assumption that if you make it insanely cheap to borrow, people will run out and buy everything. Despite his policy failing, he kept it going and accumulated the bulk of European sovereign debt. The ECB made its first rate hike in December 2015, as our models predicted.

I summed it up in 2017: “To make this as plain as possible, the ECB is the largest individual creditor of the euro countries, and is thus a bank that is undermined completely by the poor creditworthiness of the debtors. If the ECB were to apply its own rules to the banks in Europe that say bail-in, not bail-out, then by its own supervision rules, the ECB is insolvent and should be shut down.”

Draghi is responsible for putting Europe on a path from which there is no escape. I noted that Draghi had no way out, and now he has personally upset his own people. He steps down the same week that the euro broke parity. The people are finally seeing that this man is a danger to all of Europe, but unfortunately, the damage has already been done.

The post Draghi Out – The Dominoes Fall first appeared on Armstrong Economics.

Biden on Crack and Mass Incarceration

Spain – Like Most European Countries – Is Choked by Labor Market Regulations

Klaus Schwab – The Most Dangerous Man in the World