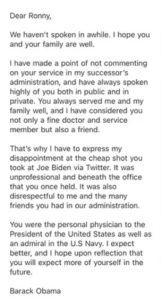 Rep. Ronny Jackson, R-Texas, a former White House physician under the Biden Administration, was reprimanded by former President Obama for admitting that everyone has been questioning Joe Biden’s mental health for years. “Holding the Line: A Lifetime of Defending Democracy and American Values,” a memoir penned by Jackson, discusses the conversations he had concerning the then vice president’s deteriorating mental state.

“Biden was on TV again, making crazy statements and concerning mental gaffes; he didn’t know what state he was in or what office he was campaigning for,” Jackson noted in reference to his 2020 campaign. “He apparently thought at one point that he was running for the Senate and later couldn’t remember what state he was campaigning in. This had been going on for months and was getting worse.”

Jackson also happens to be the same physician who forced Donald Trump to undergo a cognitive test, which he passed. The media was constantly criticizing Trump for mistakes and he willingly took the cognitive test to put the public at ease.

In the letter posted above, Obama expresses his disappointment at “the cheap shot” Jackson took at Joe Biden. He did not, however, claim that the statements Jackson made were untrue. It is almost impossible to ignore the missteps of President Biden at this point in time, and America has become the laughing stock of the world for putting a senile old man in charge. The Democrats clearly knew that Biden was mentally unfit to run for president but elected him anyway. This man possesses the nuclear codes, executive order powers, and the ability to catapult this country into the Dark Ages.