How technology can help with methane regulation 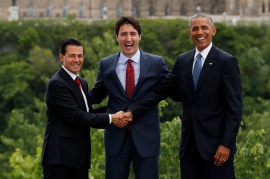 Methane is not, however, a new climate concern or a new arena for multi-national policy. Five years ago, American, Canadian, and Mexican leaders embraced new continental pledges to address climate change. A North American Leaders Summit included vows to reduce methane releases from oil and gas production by 40-to-45 percent from 2012 levels by 2025.

Part of the enthusiasm surrounding this tri-national commitment stemmed from a recognition that energy-sector methane ranks among the technologically easiest and lowest-cost greenhouse gases to mitigate. Technologies to measure and monitor methane and capture it for use as natural gas are increasingly available, maturing rapidly, and often highly cost-effective. Captured methane retains considerable commercial value if used as natural gas rather than wasted.

Given these complementary factors, methane is routinely characterized as “low-hanging fruit” for climate policy. Perhaps this contributed to the big grins that Justin Trudeau, Enrique Peña Nieto, and Barack Obama displayed toward the end of their “Three Amigos Summit.” Five years later, Biden will host his own North American summit, joining Trudeau and Mexico’s Andrés Manuel López Obrador. Some reference to climate and energy is likely. But what happened to previous summit pledges?

Policy development to mitigate methane releases has proven highly uneven. In the United States, Obama-era efforts to apply the Clean Air Act to methane collapsed after a withering counter-offensive by industry, states, and the Trump Administration. With a few notable exceptions, most notably Colorado, production states have subsequently stood pat on methane, reflecting the historic reluctance to upset production firms. Industry performance on employing best practices for technology and emission minimization continues to vary dramatically as best we know.

Since Biden took office, Congress has restored Obama-era provisions for new drilling operations. A methane fee remains under Build Back Better Act consideration, albeit weakened from its initial form and linked to funding to subsidize industry acquisition of mitigation technology. New federal funding is also in the offing to remediate abandoned and orphan wells, given past and present industry and state aversion to rigorous bonding provisions. The Environmental Protection Agency has just released proposed rules for expanded methane oversight, but these now begin a perilous political and legal path forward. In short, the United States has begun revisiting methane policy but with a very uncertain future after a squandered half-decade.

The 2016 summit, however, was not a complete flop. Canada largely honored its part of the bargain while its two continental partners shirked. Trudeau prioritized methane regulation, leading to 2018 federal standards. This included tri-annual leak detection and repair, flaring and venting restrictions, and transition to low-emission pneumatic technology at production sites. The government has pledged to go farther in coming years.

Canada has framed methane policy as a complement to other climate initiatives such as its robust carbon pricing program in preparing Glasgow pledges. Its federal government lacks authority to impose national policies and so negotiated “equivalency” agreements with major production provinces. British Columbia promptly submitted an equivalency proposal, leading to early 2020 approval. According to a Pembina Institute analysis, “BC regulations have strong elements, representing best practices and in some cases exceeding the federal rules.” British Columbia also adopted legislation to address its growing orphan well backlog, blending expanded regulations with a new levy on production to assure funding. Alberta and Saskatchewan similarly produced equivalency plans but these were more modest than British Columbia’s, resulting in longer negotiations and some variation from federal intent. Ultimately, new agreements have been approved, lubricated by expanded federal funding for industry loans and grants to ease technology transition costs.

Canada emerges a half-decade after the 2016 summit with an operational federal plan that appears to be reducing emissions despite increased energy production. There remain uncertainties as to whether Canada can honor 2025 reduction pledges, given provincial inconsistencies and enduring doubts over release data accuracy. Nonetheless, while all three nations have embraced the Global Methane Pledge, only Canada has a clear forward path to address the energy component of this initiative.

Methane will not dominate the coming continental deliberations, given the many issues that will compete for summit attention. More broadly, the way in which other places such as China, Europe, and Russia deal with methane remains unclear. The new global pledge also includes other sectors such as agriculture, which poses different technology challenges and represents a difficult constituency for political leaders to address.

But one foundational step would entail North American commitment to employ state-of-the-art technology to systematically measure and report methane emissions. Both government and business can build on the established continental model for toxic emission releases and expand its application. As long as methane continues to lack clear measurement and oversight, multi-national pledges will mean little to long-term environmental sustainability.  North America could become a model for global efforts to deliver on the new international pledge.

Infrastructure in the developing world is a planetary furnace. Here’s how to cool it.

Businesses Are Victims of Gentrification, Too

The Problem of Policymaker Ignorance