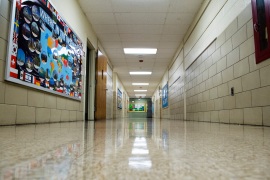 Biden’s Africa strategy seeks to revitalize ties with the continent

This has been quite a time for U.S. public schools, from pandemic-induced shutdowns to clashes across the country over one issue after the next. In this context, it’s fair to wonder—and maybe worry about—how Americans’ attitudes toward public education might be changing.

Last week, Education Next released its 16th-annual survey of public opinion. A nice feature of the EdNext poll is that it repeats some items year after year, which provides a glimpse of trends in what Americans think.

One of the survey’s more notable findings comes from perhaps its most bottom-line question. EdNext asked respondents to assign a letter grade to “public schools in the nation as a whole.” Below, I’ve charted the percentage of all respondents (gray), Republicans (red), and Democrats (blue) who assigned a very negative grade of “D” or “F.” It shows relatively little change in Democrats’ responses from 2016 to 2022 but an ominous spike in Republicans’ dissatisfaction. In 2022, 37 percent of Republicans gave a D or F grade to U.S. public schools. That’s the largest share that EdNext has recorded since the poll’s inception.

And it’s not just showing up in K-12 education. Before the pandemic, the Pew Research Center captured a sharp spike in Republicans’ negativity toward U.S. colleges and universities. Note the jump in the pink line in Figure 2. We don’t know exactly what caused that, but it coincides with protests and cancellations of right-wing speakers on college campuses that intensified claims that colleges are places of indoctrination—a claim that conservatives are increasingly making about K-12 schools. It’s notable, too, that many Republican leaders have taken a more aggressive posture toward their states’ public colleges and universities as attitudes have changed.

Figure 2. Trends in Americans’ opinions of U.S. colleges and universities

More unnerving would be a view that public schools aren’t so indispensable. Americans have a long history of holding the idea of public education in high regard. In a 2002 book, Terry Moe, a Stanford political scientist, defined what he called our “public school ideology:”

Many Americans simply like the idea of a public school system. They see it as an expression of local democracy and a pillar of the local community, they admire the egalitarian principles on which it is based, they think it deserves our commitment and support…  What they have, in effect, is a normative attachment to the public schools—and an affective inclination to see the public schools in a sympathetic light, whatever the latter’s actual performance might be.

Moe’s tone is somewhat disparaging because he believes our sentimentality about public education distorts our ability to see its real-world flaws. Stepping back, though, I think most Americans would agree that our generations-long commitment to universal public education has served the country well.

Increasingly, there are reasons to wonder about the durability of that commitment. In a 2020 book, Jack Schneider and Jennifer Berkshire warned of an escalating threat to public schools from reformers who were taking ever-more antagonistic approaches to public education. In my view, that threat has become clearer and more powerful over the last two years as the coalitions in education politics are changing.

I’ll admit to oversimplifying here, but the coming together of two groups of conservatives is especially worrisome to me.

First, there are Republican leaders who don’t seem to care much about education per se but see opportunities to use schools for political gain. This group has seized on culture war issues like transgender students playing sports. It has no clear theory for educational improvement—just a relentless attack mentality that resonates with many Republicans today. Let’s call this the DeSantis wing of today’s conservative education coalition.

Then, there’s a group of conservative leaders that does seem to care about education but maybe doesn’t particularly care for public education. This group has a theory of school improvement. Most of all, they’re skeptical of government-run schooling and drawn to the supposed efficiencies of markets. Let’s call this the DeVos wing of the conservative education coalition.

For decades, the latter group looked for allies where it could find them, and it found a decent number of Democrats. Making those alliances work required emphasizing certain principles (like equity and a strong public education system) and showing restraint in rhetoric and policymaking. Hence, the proliferation of charter schools as voucher programs stagnated. Then the country’s politics changed. When these conservatives no longer found Democratic allies, they looked to the right-wing culture warriors, sometimes explicitly. The result has been rhetoric more hostile to public schools, policy objectives less focused on addressing inequities, and initiatives built to undermine the public education system.

The clearest example is a new Arizona policy that makes every family, regardless of need, eligible to use public funds for private schooling. The policy is hostile to public schools in its design, as it could divert an extraordinary amount of funding from public schools. It’s also hostile in its presentation. Governor Ducey’s news release touted that “Our kids will no longer be stuck in under-performing schools” and featured a quote from Chris Rufo, an architect of the GOP’s school-based culture war strategy.

Count me as one who thinks that we aren’t on a good path. Where that path leads is hard to say, but we can make a few educated guesses.

Mike Petrilli of the Fordham Institute recently wrote about a bipartisan “Washington consensus” that sustained a set of education policy reforms through the 1990s and early 2000s. One result of that consensus was policies that looked similar from state to state, whether by force (e.g., No Child Left Behind requirements) or shared priorities.

With that consensus dissolved, it’s a safe bet that we’ll see more differences in the policies of Democrat-led and Republican-led states. Today, we have more distance between the parties’ education priorities, federal laws that place fewer constraints on states (e.g., with ESSA replacing NCLB), and a Supreme Court that keeps opening the door wider to private school choice programs. We should expect more Republican-led states to walk through that private school choice door. And, until the political costs of doing so outweigh the benefits, we should expect Republican governors and legislators to continue pursuing the types of inflammatory policies we’ve seen in Florida.

Having more differences between Democrats’ and Republicans’ priorities means we’re likely to see more disagreements within states as well. These can play out in multiple ways. We should expect noisy conflicts between state and local leaders of different parties along the lines of battles in Florida and Virginia over mask mandates. We should also expect much quieter cases of noncompliance or under-the-radar resistance in schools where educators disapprove of decisions coming down from above.

Arizona’s expanded private school choice program stands out for its breadth and audacity, but it probably won’t stand out for long. Even before the latest Supreme Court decision on the voucher program in Maine, advocates for private school choice were making advances at the state level. Those are sure to continue in Republican-controlled states.

Antagonism toward public schools will show itself in other ways, too. Just this summer, a former U.S. president and education secretary have called for eliminating the U.S. Department of Education (and, presumably, much of the federal funding that comes through it) while Pennsylvania’s Republican gubernatorial candidate has vowed to slash about half of the state’s public education funding.

So, what should we do about this?

I have a few thoughts. First, this is a time to strengthen federal protections for vulnerable and disadvantaged students. Students’ civil rights and access to basic resources shouldn’t be subject to the whims of their state and local political leaders, especially when their leaders have demonstrated a willingness to target them. The Biden administration and Congress should be doing whatever they can to secure protections for LGBTQ+ students, immigrants, students of color, students in poverty, and other vulnerable groups.

In addition, Democrats need to stop letting Republicans’ most outrageous ideas and accusations about public schools fester. I’ve argued that Democrats have been much too timid in education politics over the last couple of years.

And, for their part, conservatives working in or around education policy need to be more willing to draw lines in the sand when they find themselves uncomfortable with the direction of the Republican Party. They can follow the lead of Utah’s governor, Spencer Cox, who drew such a line in resisting GOP antagonism toward transgender students.

To be clear, things could be a lot worse than they are now. We need to make sure they don’t get there.

Top priorities for the refugee education response across Europe