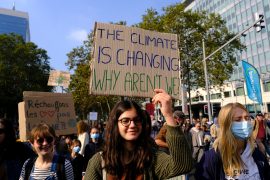 The COP26 climate conference in Glasgow produced new agreements and pledges from 196 countries to continue cutting emissions in an effort to keep the global temperature from rising more than 1.5 degrees Celsius. But will it be enough? Samantha Gross highlights some of the significant pledges and the need for more action.

Listen to Brookings podcasts here, on Apple or Google podcasts or on Spotify, send email feedback to podcasts@brookings.edu and follow us at @policypodcasts on Twitter.

Thanks to audio producer Gaston Reboredo, Chris McKenna, Fred Dews, and Marie Wilken for their support.

Here to talk about the outcomes from the two weeks of the COP26 conference is Samantha Gross, fellow & director, Energy Security and Climate Initiative here at Brookings, Samantha, thanks for talking to us again.

PITA: So, as we said, COP26, it was two weeks of negotiations, of reports, some new agreements. What were some of the major takeaways out of Glasgow this year?

GROSS: Well, some of the most important takeaways were that many countries came with more ambitious climate pledges, these so-called nationally determined contributions, the sum of which makes up the meat of the Paris Agreement. And many countries, including the United States and Europe, came forward with more ambitious pledges. And so, this is really helpful, and it gets us close to the Paris Agreement’s ambitious goal of keeping global temperature rise below one and a half degrees C.

Another thing that was encouraging, and it got watered down a little at the end, that we can talk about, but there was talk about really winding down coal. And surprisingly it’s the first time that we’ve ever seen fossil fuels specifically mentioned in one of these UN communiques that come out of these annual conferences. So the world did come forward and talk about phasing down coal and that’s really a step in the right direction.

PITA: Could you tell us a little bit more about that? You mentioned it was watered down; I understand it was originally intended to be a phase out and it became a phase down. What did that look like, what happened there?

GROSS: It was, it happened at the very last minute. The Indian delegation suggested this change from phase out to phase down. And it came in at the last minute; it was frustrating to a great many of the delegates there. But these meetings run on consensus, and so everyone needed to agree. So rather than scotch the whole agreement at the last minute, they decided to go along with the change in language, a phase out to phase down.

It’s frustrating, but I do see where India is coming from. Their economy is growing fast, their electricity demand is growing fast, and it’s very dependent on coal, and particularly on local Indian coal. So phasing out coal is particularly difficult task for them, so I understand why they wanted to do it. And it was still a bit frustrating that it got watered down but way better to have that agreement than to have nothing. And still it’s the first time we’ve talked about coal in one of these agreements, so it’s good stuff.

PITA: Along with the coal phase down there was also goals of ending government subsidies for oil and gas industries. Can you tell us more details about what that looks like? And then maybe also looking forward, what will look like for investments in green energy, particularly here in the US.

There’s also this idea of sort of the implicit subsidy that we don’t pay for in the price of our fossil fuels the externality of the environmental problems that they cause, not just in terms of climate but also in terms of local pollution. And so we’re not — many countries, in fact, very few are in the area where they’re really pricing fossil fuels according to their true costs. It’s difficult thing to do, I mean it involves really reworking energy systems to take into account true costs. And you also always have to worry about lower income people and whether they can afford to pay higher prices for their energy. Those at lower incomes tend to spend a higher portion of that income on energy and energy services, so this is really difficult.

PITA: Going back to the 2015 Paris Agreement there was criticism even then that a lot of the pledges being made were not going to be enough to keep global climate from rising more than that goalpost of 1.5 degrees Celsius. This year at the COP26 conference, the UN Secretary General António Guterres said that that goal is on life support. We also heard things like really heartbreaking testimony from countries like the Maldives, small island nations, basically saying that it’s already too late for them. Climate change has happened to their country and now they’re looking at relief. Talk to us about this tension between having these goals and, as you say, some agreement, it’s better than none, but this sense of reaching a dire tipping point and how you measure “well some’s better than none” against this sense of a tipping point of no return.

The real question about tipping points is a difficult one, because I feel like we’re all sort of walking in a fog to a cliff. We know there’s a cliff out there, we’re not quite sure where it is, and we don’t really know where that point of no return might be. The climate is a very complex system. We know it’s warming, but if we get into certain feedback loops with things like melting permafrost, for instance, letting methane into the environment, we don’t know where some of those feedback loops are. So we’re walking in a fog towards that cliff not quite sure where we might step off. So that makes action sooner rather than later very important.

And we’re in this really tricky thing, where one and a half degrees is an extremely difficult goal and requires cuts that are very hard to make. But on the other hand, we don’t know when we hit the point of no return. I think that’s why you hear these descriptions of this being the last best effort for the climate. And it’s not that nothing will happen after this year, that this Glasgow summit was really the end. We’re going to keep working on it, it’s just that the further we go, the closer we get to that cliff of feedback loops that we don’t know how to undo, and so the level of danger for the climate keeps going up, even though we don’t perfectly understand where that cliff lies.

PITA: Sure. One of the things that that the U.S. particularly struggles with and that we tend to think of is that going into some of these big conferences, we’ve had presidential administrations like  President Obama in 2015, now President Biden, where the administration is coming in with really ambitious goals, they want to have far-reaching transformative change, but they know at the end of the day, there’s going to be limits on what they can do, either through the executive branch and then ultimately having to bring things back to Congress and getting legislation through Congress. The U.S., though, can’t be the only country that’s dealing with – a democratic country, there’s divided government. What can the U.S. do to try and to deal with that issue? How are other countries doing it? Can we learn lessons from anyone in terms of making big change when you don’t have full control over making those changes?

GROSS: Yeah, it’s a difficult question. And I think one of the things that makes it more challenging in the U.S. than perhaps in some other places is the extreme level of polarization that you’re seeing right now. There’s a certain wing in American politics that thinks that anything Joe Biden is for, they must be against, even if they stand to lose, as many of us do, from the changes brought on by changing climate. And so, you hope that other countries are a bit less polarized than us, and many are. But yeah, you’re facing the problem in a democracy that democracies tend to tend to move somewhat slowly on difficult changes. You need consensus. You need to do things in ways that are equitable and fair, and that makes very big transformations somewhat difficult. And I think we’re all learning as we go along how to do a big fast transformation in democratic systems that aren’t necessarily designed for that sort of thing, where consensus rules, and the will of the people is often not to move super-fast.

And so I think the whole world is figuring that out and countries that are less polarized or areas like the European Union where the concern about climate change is a bit higher have done better on this, but there are still hold-outs in those places too, and parts of the European Union that face greater challenges in changing. I mean this is really the fundamental question of our era, I think.

PITA: Well, so, then what happens next? The U.S. has signed on, along with other countries to the agreements that came out of Glasgow. What of it is happening from the administration? What needs to be passed? What are the next steps before next year’s conference?

GROSS: Well, all the countries who are in Glasgow who put forward new pledges now need to go home and implement them. The pledges are words on a page. What they go home and the policies that they put in place to implement those pledges are what really matters, not just in the U.S., but around the world. And so you see parts of the Build Back Better plan here in the United States that would help get us towards meeting our pledge. There are some changes in the infrastructure bill that has already been passed, focused on modernizing our electricity grid and encouraging electric vehicles that will help. But it’s not just us, it’s every country where they need to go back and then implement the pledges that they made, and the Biden administration is working on that now.

PITA: Well Samantha, I’m sure we’ll talk again before next year, but hopefully maybe we’ll have an update on some on some good news on progress here.

GROSS: I hope so.

PITA: Alright, thanks very much for talking to us again.

How technology can help with methane regulation

Investing in nature to protect and benefit people

Investing in nature to protect and benefit people