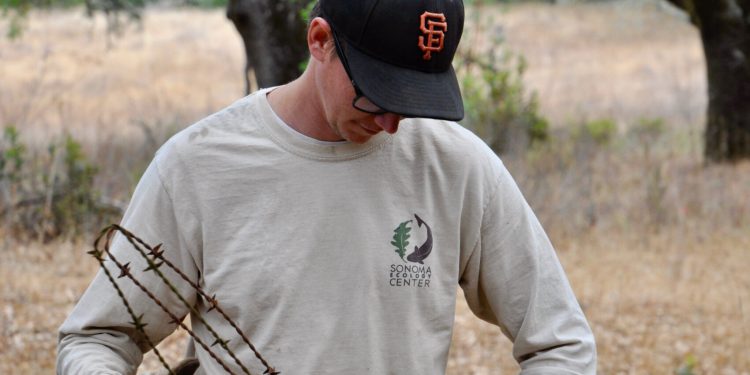 The Sonoma Ecology Center (SEC) has worked to preserve, protect and improve the Sonoma Valley Wildlife Corridor since we originally identified and championed this critical natural resource component of the Sonoma Valley landscape back in the 1990’s. The initial idea, proposed by dedicated SEC volunteer Christy Vreeland, gathered momentum as SEC brought the concept to local agencies and landowners to help establish and build it into an essential landscape feature of Sonoma Valley.

Wildlife Corridors are a way for animals to move through areas where habitat fragmentation occurs because of development.

One area of focus to maintain wildlife movement across Sonoma Valley is a narrow part of the corridor where it crosses the Sonoma Developmental Center (SDC). SDC connects Jack London State Historic Park and Sonoma Mountain to the west, with the eastern hills of Sonoma Valley, making preserving and improving the function of the corridor in this location essential.

The SDC property, as described by Sonoma Land Trust, is “a critical link in the landscape that provides high climate diversity and slower rates of climatic change than similarly sized linkages throughout the North Bay.” In an assessment of the SDC property by Gray and Merenlender (2015), findings showed the property serves as a key location for landscape permeability and freedom of movement by wildlife as long as it is left largely undisturbed.

A collection of images from our wildlife cameras that are monitoring exactly who from the animal kingdom is passing through the creek corridor section of the Sonoma Valley Wildlife Corridor. This research is made possible by the research portion of the grant from the California State Coastal Conservancy which funded the entire fence removal project.

Relic fencing on the SDC property has limited the efficacy of the wildlife corridor. Even the partial restriction of free movement for wildlife in this area is cause for concern. Led by Senior Scientist and Research Program Manager, Steven Lee, the Sonoma Ecology Center Restoration Crew embarked on a project to remove fencing identified as an impediment within the wildlife corridor. In partnership with the State Coastal Conservancy, it was determined that the majority of fencing on the SDC property was unnecessary and fit for removal. Steven and SEC’s Restoration crew identified several hundred yards of old fencing that crossed the section of the Sonoma Valley Wildlife Corridor along Sonoma Creek and flagged it for removal. The crew hand cut vines, branches, and logs from fence wires, pulled wires from posts, and carried the wire out of the delicate riparian zone for disposal. With the fences successfully eliminated, wildlife can now move to and within the riparian corridor of the creek with more ease and safety.

Fencing that SEC’s Restoration crew members hauled away was left over from pasture development on the SDC property prior to the mid-1970s. No longer serving its purpose, the defunct fencing had the potential to cause serious animal injury or death as a result of collision or entanglement (Gray and Merenlender, 2015).

The full haul of defunct fencing that our Restoration Crew removed from the SDC property  While this fencing on the SDC property was successfully removed, there are many more locations in the area on SEC’s radar with fences identified to be harmful to wildlife and their movement. SEC will seek additional support and funding to address other fencing on SDC’s open space in conjunction with larger scale planning for natural resources improvements in the area, including trail management, fire fuels management, and water resources planning. However, much of the success of this work hinges on the outcome of planning for the future of the SDC property and how the surrounding area will be impacted by future development. You can read more on SEC’s recommendations for the SDC Specific Plan here.

While the future of the SDC campus remains undecided, visitors to the area can participate in making the area more wildlife friendly through simple guidelines: when you’re out for a hike stick to established trails rather than taking lightly travelled social trails or duplicate trails. Use formal trailheads for access, and keep dogs leashed to prevent startling wildlife. Property owners in the area can also help by removing fencing that isn’t needed, or by providing ways animals can move more safely through their property. A guide to fencing and wildlife we wrote for Sonoma County Ag + Open Space can be found at this link. Through actions big or small we all can take steps to help keep the animals we coexist with safer, healthier, and more wild.

The Plot Behind the Curtain

Examining the intersection of data privacy and civil rights