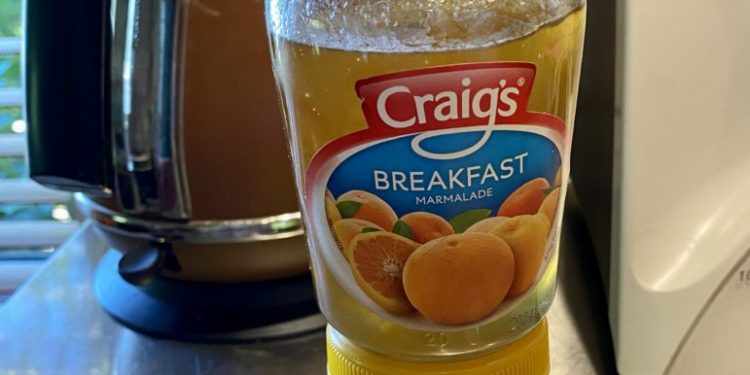 Crystalised ginger, vegemite, marmalade. Marmalade. Just thinking of marmalade makes the hairs rise, the back shudder and my gag reflex start. There is something about marmalade that has always done this to me. The taste and smell are not awful in the way that a rotting carcass is. Marmalade just, well, repels me. Even the smell of it is enough. Crystalised ginger is similar but at least I remember being given some by my Nana P and mistaking it for toffee. Big mistake! The letdown might have something to do with it. Vegemite, given that it is somewhat similar to marmite, which I love, is a trickier one to explain. But again, the taste of vegemite just repels me.

Taste and smell seem to be very individual dependent. Weirdly, my mother prefers vegemite over marmite, is OK with ginger, and loves (craves!) marmalade. You can choose your breakfast condiments but you can’t choose your relatives!

All sorts of noxious products in our kitchen…

Taste and smell are important senses for creating memories and emotions. The tang of freshly cut grass, the homeliness of baking bread, the fullness of seabird feathers, all of this, with a single smell, can take you back to previous memories, often long buried and forgotten. The same with taste. One taste of durian will bring back memories of Singapore. A well cooked mutton roast to many Sunday afternoons. Oddfellows mints and little pink smoker lollies to evenings spent at my Nana Ts.

Other species also seem to respond to taste and smell of food items. This makes sense. You want to remember the nice things that you ate and avoid the things that made you ill. Smell and taste can save a lot of time and help an individual to make correct decisions about what to eat and drink.

Ernie, our fat cat, often leaves behind the parts of the cat biscuits that she does not like the taste of (presumably the healthy slimming parts). I throw these out our back door onto the grass where they are eaten by some resident blackbirds. They seem to like them so much that they will risk coming into the laundry, when the door is left open, and taking them directly from cat’s bowl. Often, when she is watching (and obviously relieved that she doesn’t have to eat them herself)!

Pest management seeks to take advantage of these types of behaviour. Toxins are often used to target species that require population reduction. The toxins are often delivered in baits that have an extra lure to access the taste and smell areas of the target brain. This underpins much the vertebrate pest management in New Zealand and is part of the reason that we can successfully reduce these populations to below 5%.

And then there are species like deer. On one hand they are pest species that munch their way through native ecosystems. On the other, they are a valued hunting resource. So we want to control them, but not too much. Dropping cereal baits into their habitat that are attractive to possums is too hard for deer to resist. Depending on the habitat and the ease at which they can find the baits, they can quickly scoff enough baits to give themselves a lethal dose.

Clearly what we need is a marmalade to add to these baits. Something that possums like but deer do not.

In a paper published in New Zealand Journal of Zoology Lincoln University PhD student Kaylyn Pinney, with supervisors James Ross and Adrian Paterson, searched for a marmalade for white tailed deer (Odocoileus virginianus) that would keep them safe.

The research was in two parts. First, there was a captive trial with deer kept in a farm environment. Second, there was a trial of deer with transmitters that were in a natural wild area that had a toxin drop.

In the captive trial, white tailed deer were offered cereal baits of the type often delivered during pest control operations, and that deer will gorge on like a jar of sweets. Some were just straight cereal baits, some were cereal baits that had a compound EDR (that is used as a repellent for red deer), and some had a new compound, PESTEX-DR, that may be an alternative repellent. This is like offering me a jet plane lolly, a jet plane with marmalade flavour, and a jet plane with ginger flavour. I cringe just thinking about that!

The deer responded as I would have. They loved the plain cereal baits, but after a bite or two of the other baits they would not eat any more. One of the individuals appeared so upset after tasting the repellent that he went back to the bin that had contained the nice baits and licked and nibbled on the wood.

This seemed promising. Kaylyn was able to take advantage of a large Battle for the Birds (Tiakina Ngā Manu) toxin drop to control rodent numbers throughout the range of the white-tailed deer, near Glenorchy. Ten white tailed deer were captured and GPS transmitters were attached to them. Their movements over a year were recorded.

Of interest for this research was what happened when the toxin drop occurred. The deer repellent EDR, which had worked well in the captive trials, was added to the cereal baits. The operation proceeded well and four of the deer were present in the drop area for at least some of the ten days that are most of concern for high activity of the toxin (and most likely to kill the deer).

Three of the deer survived through either not encountering the baits (unlikely) or being repelled by them. The marmalade had worked. The youngest deer in the study was not so lucky and died. Postmortem investigation revealed that they did have enough toxin in their system to have killed them. Either the marmalade doesn’t work for all deer or they were not old enough to have experienced the horrors of marmalade.

The yellow dots show us where one of the deer with a transmitter wandered. Image from Kaylyn Pinney.

The repellent worked very well in captivity and fairly well in the wild. However, even with the repellent in a bait, a proportion of the deer will still succumb in any control operation with toxins in cereal baits. This is useful for wildlife managers to know and allows them to better plan for the impacts of the decision to control possums, rodents and mustelids.

So here we have some research that is tastefully done and where repelling deer will save their lives.