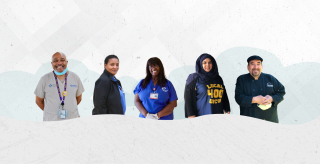 Since the start of the COVID-19 pandemic, political leaders in Washington, D.C. have voiced their enthusiastic commitment to support the country’s essential workers. President Joe Biden, Vice President Kamala Harris, Senate Majority Leader Chuck Schumer (D-N.Y.), and House Speaker Nancy Pelosi (D-Calif.) have each emphasized that it isn’t enough just to praise essential workers—we must pay and protect them as well. But one year into the pandemic, there’s still much work to be done.

Tony Powell is one of the 50 million essential workers who continues to risk his well-being on the COVID-19 frontlines. Powell works as a unit secretary at a hospital in the southeast Washington, D.C. neighborhood where he grew up—a community that COVID-19 has hit hard. In his more than 40 years at the hospital, he has never experienced anything like the pandemic.

“It is a heavy load to carry,” Powell told us in an interview last week. “Sometimes it feels like you are carrying a car up a mountain. You can’t put yourself in a bubble when you see people around you dying. I see people I went to school with and grew up with. They’ll come in and just like that, they are gone. It is really mind blowing that you can be here today and gone tomorrow.”

Powell and his fellow frontline employees at the hospital are strenuously working to do jobs like cleaning, taking vital signs, and spending time with patients—but without the decent pay and respect that nurses and doctors earn. “These are people who work very, very, very hard, and who make very, very, very little,” he said.

With the country on track for mass vaccinations in the coming months, the worst of the pandemic may be over. But the risks facing frontline essential workers like Powell have not ended. Many of the underlining inequities they face—including low wages, structural racism, and inadequate protections—remain.

It is long past time that we treat essential workers as truly essential. Lawmakers in Washington and around the country have the opportunity to turn their policy rhetoric into real change. The recommendations in this report lay out how federal, state, and local policymakers can—finally—give essential workers what they have always deserved: the dignity of a living wage, lifesaving protections, and power in their workplaces.

Workers with the least are risking the most

The COVID-19 pandemic has shone a harsh light on the moral indignity facing millions of essential workers who perform jobs vital to the country at great risk to themselves and their families, but without adequate protections or wages that meet even basic expenses.

From housekeeping to grocery retail to care work, these risky, essential jobs are disproportionately low-paying. Using our colleagues Adie Tomer and Joseph W. Kane’s essential worker classification and 2018 data from the Bureau of Labor Statistics, we found that 22.3 million essential workers were in occupations with a median wage of less than $15 an hour—comprising approximately half (47%) of all workers in these low-wage occupations. Black and brown workers are overrepresented among essential workers in low-wage frontline positions that pose health risks.

Sabrina Hopps, a housekeeping supervisor in an acute care facility in Washington, D.C., worries about the risks her job poses to her family. “I’m petrified, to be honest,” she told us last year. “If I contract it, I live with my son, my daughter, and my granddaughter. My son and I have asthma. He is also a cancer survivor.”

Financial relief and expanded anti-poverty programs are an important start

The American Rescue Plan Act, signed by President Biden last week, provides an important first step in supporting the country’s essential workers. The historic legislation did not specifically target essential workers, and it left out several key priorities such as a higher federal minimum wage and hazard pay. However, the act’s strong equity focus means that low-wage essential workers and their families will receive a disproportionate share of the relief from expanded anti-poverty programs such as the Child Tax Credit and Earned Income Tax Credit, which will slash child poverty and give a one-year income boost for some cashiers, home health aides, cleaners, agriculture workers, and others earning low wages. Stimulus checks will also provide needed financial relief for most essential workers, many of whom carry the double burden of COVID-19 exposure and financial insecurity.

For Yvette Beatty, a home health aide in Philadelphia, the new $1,400 stimulus checks are a lifeline. Throughout the pandemic, she has risked her life caring for some of society’s most vulnerable residents, but has barely made ends meet. Her hours were cut. Her son lost his job and has struggled to access unemployment benefits. Her $12.75 per hour paycheck can’t cover the basic expenses of her family of six, leaving her with painful choices between paying for food and paying her bills. Combined with the $600 from December’s bill, the total of $2,000 in relief would make all the difference.

“It would keep me surviving, so I can keep them surviving,” said Beatty in January, before the new relief bill had passed. “This $2,000 would at least get more food in the refrigerator. It would mean I could catch up on all my bills, buy medicines, pay my mortgage. The $2,000 would help a lot.”

A year into a pandemic in which Americans with the least have sacrificed and struggled the most, the American Rescue Plan Act prioritizes equity and the greatest relief for workers and families with the lowest incomes. But the financial support is temporary, timed to the worst of the pandemic recession. Ultimately, essential workers need permanent change.

The following seven policy recommendations are aimed at properly paying essential workers, protecting them with adequate health and safety measures, and empowering them to have a greater voice in the workplace.

When the pandemic shut down nonessential businesses, it was essential workers who kept society functioning. And long after the health risks of the pandemic subside, their work will still be essential. Below are three ways that policymakers can boost pay for essential workers and narrow the enormous gap between the value they bring to society and the extremely low wages many earn in return.

“I think that $15 an hour should be the minimum, and stay there,” Lisa Harris, a Kroger cashier, told us last spring. “We are heroes every day, and we deserve to be paid as such.”

Policymakers at the federal and state levels need to take a more proactive role in keeping essential workers safe on the job and providing them the benefits they need to care for themselves and their loved ones. So far, their track record is dismal: As millions of frontline essential workers faced deadly risks over the past year, the federal government failed to adequately protect them. Dire shortages of personal protective equipment (PPE) during the pandemic’s early months jeopardized the safety of millions of essential health workers. The Labor Department’s long-understaffed and underfunded Occupational Safety and Health Administration (OSHA) systematically failed to enforce safety standards during the Trump administration; the agency’s inspector general found that worker complaints to OSHA increased 15% in 2020, but inspections declined by 50%.

A February 2021 survey found that nearly 30% of workers still do not feel protected from contracting COVID-19 at work. Twenty percent of workers reported going into work ill during the pandemic, and two-thirds did so because of a lack of paid sick leave or out of fear of losing a job or angering their employer.

“It’s been a challenge for everybody,” Darryl Cox, a poultry plant worker in Virginia, said in an interview this summer. “We work around 600 people a night in a packed environment. You just have to pray and believe and hope that the person that you’re working next to is not infected.”

The pandemic has proven that workers deserve a voice in their workplaces and in the safety decisions that could mean life or death for them. But without a union, workers have little say in employers’ decisions, and little power to shape the conditions of their work. The high-profile firings of workers at Trader Joe’s and Amazon after voicing safety concerns illustrate how nonunionized workers can face retaliation for speaking out.

Several recent studies show how unions are an important vehicle for workers to express workplace safety concerns and negotiate working conditions, in addition to other core issues such as pay and benefits. Researchers at the University of Minnesota found that unionized workers are more likely to speak up about health and safety concerns, and unionized workplaces were 30% more likely to be inspected for a health or safety violation. Another study found that nursing homes with unionized workforces were associated with a 30% reduction in relative COVID-19 mortality rates, largely due to better access to protective equipment.

In an interview last summer, David Saucedo, a 52-year-old nursing home cook in Baltimore and a member of Service Employees International Union, said he was initially denied PPE. Only after he argued his case to two supervisors was he finally able to receive lifesaving protective equipment.

“It gives me a voice,” Saucedo said, on being a member of a union during the pandemic. “It gives me one more ledge before I get pushed over. With the union on our side, I believe I can fight even harder for people.”

According to a 2020 Gallup poll, 65% of Americans approve of labor unions—the highest level since 2003. But after decades of declining union participation, only about 10% of American workers belong to one. Current labor laws make it extremely difficult for workers to unionize. Amazon’s aggressive anti-union response toward organizing efforts by warehouse workers in Bessemer, Ala. illustrates these daunting challenges.

Since the start of the COVID-19 pandemic a year ago, dozens of frontline essential workers have shared with us their pandemic experiences, the challenges they are confronting, and their hopes for the future. Many said that while it should not have taken a pandemic to make their work visible and valued, it has shown that change is urgently needed.

Lisa Harris, a Kroger cashier outside of Richmond, Va., reflected on this opportunity for change.

“Someone once said, ‘You are a fool if you don’t use a crisis,’” Harris said. “This is a crisis for our country, and we need to think about how we can use it to be better after we come through this.”

For Harris, that starts with valuing essential workers and compensating them fairly.

Amazon’s union battle in Bessemer, Alabama is about dignity, racial justice, and the future of the American worker