Amazon’s union battle in Bessemer, Alabama is about dignity, racial justice, and the future of the American worker 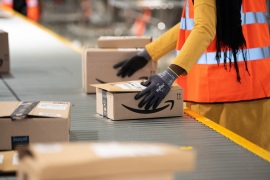 This week, the historic unionization drive by Amazon warehouse workers in Bessemer, Ala. will get an audience in the Capitol, as Amazon worker and union advocate Jennifer Bates testifies in front of the Senate Budget Committee. While the hearing will focus mainly on income inequality, the fight by Bates and her fellow Amazon workers for union representation in the majority-Black city of Bessemer is just as much about racial justice, basic dignity, and the right of workers to have a voice in their workplaces.

If the Bessemer workers vote to be represented by the Retail, Wholesale and Department Store Union (RWDSU) this month, they will become the first unionized Amazon warehouse in the country. It will also mark one of the biggest union victories in the South in decades, potentially galvanizing the labor movement and inspiring workers far beyond Alabama.

The Bessemer vote comes one year into a pandemic that has exacerbated the nation’s preexisting conditions of racism and rampant inequality. While the $1.9 trillion American Rescue Plan will bring immediate relief for low- and middle-income Americans, most of the provisions are temporary and do not address the structural causes of the current “K-shaped” recovery that sees many white Americans experiencing an economic rebound while Black and brown communities suffer higher rates of death, unemployment, and economic insecurity.

Society still needs to dismantle and replace the underlying structures that generate these racial disparities. And while tax cuts and stimulus checks provide needed relief, what can truly change the system is worker power.

Black workers are overrepresented among the risky essential jobs (like those at Amazon’s warehouses) on the COVID-19 frontlines, and especially among frontline jobs that pay less than a living wage. Black workers comprise 27% of Amazon’s workforce, compared to just 13% of workers overall in the U.S. In Amazon‘s Bessemer warehouse, union organizers estimate that 85% of workers are Black.

Amazon’s disproportionately Black workforce has risked their lives during the pandemic, but the company has shared little of its astonishing profits with them. Last year, Amazon earned an additional $9.7 billion in profit—a staggering 84% increase compared to 2019. The company’s stock price has risen 82%, while founder Jeff Bezos has added $67.9 billion to his wealth—38 times the total hazard pay Amazon has paid its 1 million workers since March.

Despite soaring profits, Amazon ended its $2 per hour pandemic wage increase last summer and replaced it with occasional bonuses. From March 2020 through the end of the year, Amazon’s frontline workers earned an average of $0.99 per hour of extra pay, or a roughly 7% pay increase. Amazon’s pandemic pay bump was less than half of the increased pay at competitor Costco, and a fraction of what it could have afforded from the extra profits it earned during—and largely because of—the pandemic. In fact, Amazon could have more than quintupled the hazard pay it gave its workers and still earned more profit than in 2019. And while Amazon frequently touts its $15 per hour starting wage, Costco’s recent increase of its starting wage to $16 per hour (despite having significantly smaller profits than Amazon) shows that $15 is a floor, not a ceiling.

Some of the workers at the Bessemer warehouse have called on Amazon to reinstate its $2 per hour hazard pay. Yet Amazon’s unwillingness to share its staggering profits with its workers is not the only—or even the primary—driver of the union effort in Bessemer.

In an essay published in The Guardian last month, labor journalist Steven Greenhouse introduced Darryl Richardson, a 51-year-old “picker” at the Bessemer warehouse. Richardson voiced his frustration about the dehumanizing nature of his work at Amazon, including the unrelenting pace, the risk of being terminated at any point, and the constant surveillance.

Bessemer’s pro-union workers face an uphill battle as they take on one of the most powerful companies in the world. Amazon’s aggressive anti-union tactics have garnered headlines, but they are illustrative of the daunting challenges and uneven playing field facing organizing efforts in all workplaces. Today, 65% of Americans approve of labor unions—the highest level since 2003. But after decades of declining union participation, only about 10% of American workers are members of one.

While the country’s decades-old labor laws make it extremely difficult for workers to form a union anywhere, the pervasive right-to-work laws in the South and conservative states make organizing efforts like the one in Bessemer even more difficult.

In the South, anti-labor laws are inextricably linked to the historic suppression of Black workers. Racism in the form of no- or low-wage Black labor has been part of the growth model of racialized capitalism. And when workers are unable to collectively bargain and demand their fair share, economic growth becomes concentrated in the hands of a few.

Fortunately, the Birmingham metropolitan area—home to Bessemer—has already proven that unionized Black workers can create economic growth and shared prosperity. At the turn of the 20th century, Birmingham labor unions facilitated the establishment of a Black middle class. Black and white miners organized to form the United Mine Workers (UMW) union and, together, secured better wages. Following UMW’s success, what was then known as the Alabama Federation of Labor (AFL) followed the same strategy of a racially integrated membership—in part out of fear that nonunionized Black workers would replace striking workers. As a result, Black Alabamians earned leadership positions and spots in every committee of the AFL, and the union’s first five vice presidents were Black. This inclusive labor movement continued until the 1930s, when U.S. Steel—rife with Ku Klux Klan members—began to restrict job promotions for unionized Black workers, limiting access to senior positions they previously occupied.

The Bessemer union battle comes after decades of concerted effort by business leaders and policymakers to beat back the 20th century victories of labor organizers. From Ronald Reagan’s breaking of the air traffic controllers’ strike to Janus v. American Federation of State, County and Municipal Employees, these forces have eroded labor union protections, and with it, workers’ say in their workplaces.

Fixing the country’s broken labor laws to give workers like those in Bessemer a fighting chance will require major legislative change. Last week, the White House issued a statement backing the Protecting the Right to Organize (PRO) Act. The legislation would enable more workers to form a union, exert greater power in disputes, and exercise their right to strike, while curbing and penalizing employers’ retaliation and interference and limiting right-to-work laws. The PRO Act passed in the House of Representatives last week but faces long odds in the Senate due to strong Republican opposition and fierce resistance from business. Short of ending the filibuster, the act has little chance of passage.

Ultimately, change will require an empowered workforce demanding it. In the words of Frederick Douglass, “Power concedes nothing without a demand”—and that demand looks like Bessemer workers standing up to one of the most powerful companies the world has ever seen.

In order for these and other workers to have a chance, they will need allies in Congress to create a more level playing field. In 1935, the 74th Congress passed the National Labor Relations Act because of the labor movement. In 1964, the 88th Congress passed the Civil Rights Act because of the civil rights movement. Today, the 117th Congress needs similar pressure from the racial and economic justice movements. The workers in Bessemer are doing just that, which should inspire others across the nation to demand better working conditions, higher wages, and stronger labor laws from both their own management and leaders in Washington.