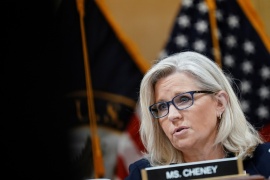 Today, two Republican women will be on the ballot. Their candidacies say a great deal about the war within the Republican Party.

In Alaska, former governor and former Republican vice presidential candidate Sarah Palin is running in a special election to fill the open congressional seat held by Don Young who died earlier this year. For those who don’t remember her, Palin was Donald Trump before Donald Trump—just in lipstick and heels. As a vice presidential candidate especially, she shared all the Trump characteristics, good and bad. Charismatic, a riveting public speaker, able to quickly and effectively connect with the white working class. Who can forget her famous quote “They say the difference between a hockey mom and a pit-bull—lipstick.”

She also shared Trump’s negatives; she held extreme right-wing views, she was hostile to the press, she made racist remarks, and, like Trump, she was spectacularly unprepared for office. In a series of disastrous interviews with NBC News anchor Katie Couric in 2008, she couldn’t answer what newspapers she read, she couldn’t give a knowledgeable answer to a question about banking (while the country was in the midst of a banking crisis), and she couldn’t give a sound answer about Russia. The interviews were mocked in a widely-watched Saturday Night Live skit. Given that the presidential candidate, Senator John McCain, was elderly (72 at the time of the election) and had had some health problems, Palin’s clear lack of readiness to assume the highest office in the land hurt McCain who ultimately lost to Barack Obama.

The other Republican woman running today could not be more different from Palin. Representative Liz Cheney is running for re-election to her congressional seat in Wyoming. (Like Alaska, Wyoming is sparsely populated so each state only has one congressional district.) Unlike Palin and Trump, Cheney has always been a conservative Republican and has never held positions that diverge from Republican orthodoxy. Her father, former Vice President Dick Cheney, was widely reviled by many Democrats for his role in the invasion of Iraq, but he became a hero of much of the Republican Party for that same reason. But in spite of her impeccable conservative credentials, Liz Cheney has become an enemy of the Trump wing of the Republican Party; she voted in favor of impeaching Trump for his role in the January 6 insurrection and has since gone on to be Vice Chair of the House commission investigating January 6. She has performed this role with calm and precision, catapulting her to national fame and acclaim.

Her role leading the hearings has made her a household name. All across the country Democrats have been saying things like, “Of course I don’t agree with her on the issues but…”. She is often mentioned as a potential presidential candidate and widely admired for putting principle over politics. However, back home in Wyoming, residents don’t see it that way. There, Cheney is losing, bigly. In the RealClearPolitics average of polls she falls 25 points behind Harriet Hageman, her challenger who was endorsed by Donald Trump.

Palin’s Republican party is Trump’s Republican party and it is clear that it is here to stay given the large number of candidates who are running races forged by Trump himself. It’s probable that Palin, even if she wins her congressional race, has almost no path back to national leadership. She has not spent the years since her disastrous vice presidential campaign attending seminars at the Heritage Foundation. Rather, she has continued to engage in a variety of trivial pursuits that are unlikely to make anyone take her seriously again. And yet she invented the raw, in-your-face populism that Trump perfected. If the Palin wing of the Republican Party prevails in 2024, it’s likely that Liz Cheney’s political career will be over.

The next two years should tell us a great deal about whether Cheney’s profile in courage turns out to be more successful than Palin’s in-your-face populism in defining the Republican Party of the future.

Rebel News on the WEF Infiltration of Governments