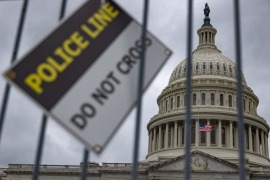 When I moved to D.C. a decade ago after many years of teaching at Brown University, I never thought I would have to deal with violent threats. And yet, in recent weeks we have seen a spate of violent threats and actual violence in the United States.

Following the FBI raid on former President Donald Trump’s residence at Mar-a-Lago last week, one of his supporters tried to attack an FBI office in Cincinnati. After being repulsed, there was a high-speed car chase that resulted in shots being fired at the police and the suspect being killed.

Members of Congress have been getting death threats that have forced a number of them to obtain security details to safeguard their personal safety. Representatives such as Adam Kinzinger, Liz Cheney, and Nancy Pelosi have received detailed threats of violence that necessitated enhanced protections.

In response to these threats, Representative Kinzinger noted that “threats of violence over politics has increased heavily in the last few years. But the darkness has reached new lows.” According to news reports, one caller “threatened to come to Kinzinger’s house and go after his wife and his newborn baby” and warned “I’m going to come to protest in front of your house this weekend … We know where your family is, and we’re going to get you … We’re going to get your wife, going to get your kids.” Another ominously warned, “I hope you naturally die as quickly as f**king possible.”

A GOP gubernatorial candidate in New York meanwhile was attacked onstage while giving an election speech. In front of startled attendees, a man with a knife jumped onstage and sought to stab Lee Zeldin, before on-lookers subdued the individual and prevented serious harm to the candidate.

Academic experts are not immune to this onslaught either. As I note in my Brookings Institution Press book, Power Politics: Trump and the Assault on American Democracy, one-quarter of my Governance Studies residential scholars have been the object of credible death threats. On a number of occasions, we had to notify the FBI about threatened violence and at least one of these threats was serious enough that a man was arrested.

In that case, a Louisiana man placed a graphic phone call that warned “I am going to wipe the entire Brookings Institution off the face of the f**king earth. You are scum sucking evil mother**kers and you all deserve death in the most heinous way and it’s coming at you.”

Others warn that the possibility of armed conflict is real. “There is suddenly a very real risk of violent political instability in this country for the first time in more than 150 years,” noted Joel B. Pollak of the conservative Breitbart News. It does not help that some Republican leaders have fueled public outrage by pledging if they regain majority control of the US House of Representatives, they will hold legislative hearings on the Department of Justice, FBI, members of the January 6 Select Committee, and private organizations critical of the former chief executive as that escalates political rhetoric and encourages GOP supporters to think something amiss is happening that justifies a strong response.

The rise both of threats and actual violence shows the dangerous levels of polarization, extremism, and radicalization that we face in America today. In the current period, people see opponents as enemies and many do not trust the motives or actions of opposition leaders. The lack of civility has reached such a dangerous level that it threatens the safety of leaders, the functioning of law enforcement, and our society’s ability to address major problems.

Given the variety of contemporary threats, it is important to take political violence seriously and undertake actions that mitigate these risks. For example, the Department of Homeland Security needs to expand its domestic terrorism unit to monitor violent threats. A 2022 DHS report recommended the federal government improve its case management capabilities, train workforces on how to deal with violent activities, and work with local officials on reducing domestic terrorism.

The FBI should increase its enforcement actions against people in organizations who foment violence. Federal agents should enforce current laws and direct resources against those who encourage violence. Many violent incidents are presaged by online rhetoric so keeping track of dark web chatrooms would help law enforcement identify those with violent tendencies.

Our intelligence agencies must be alert regarding possible foreign support of extremist groups. News reports have suggested that foreign entities might have provided money to alt-right figures who were part of the January 6, 2021 insurrection. In addition, there has been evidence that “Russian state and proxy media outlets ‘have amplified themes related to the violent and chaotic nature of the Capitol Hill incident, impeachment of President Trump, and social media censorship.’”

Social media companies need to be a better job of policing violent content on their websites. Firms are using artificial intelligence to slow the dissemination of violent threats, but some are making money from organizations that advertise on their sites. It is fool-hearty and short-sighted for businesses to profit from the rise of violence in America.

Ultimately, political leaders need to tone down their inflammatory rhetoric. Reacting to various events with divisive rhetoric or threats of retaliation encourages people to act on that language. Leaders should understand that words have consequences and how they lead has major ramifications for the health of our polity.