The spitfire: a sure-fire way to eradicate stoats? 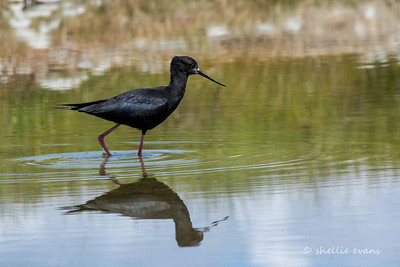 Stoats, weasels and ferrets: the terrifying trio. If New Zealand’s native birds could speak, I’m sure that’s how they would refer to them as they swap stories of escape and near misses. Widespread, wily and lethal, the stoat is considered the greatest threat to the survival of many endangered and threatened native birds on the mainland, such as the takahe, orange-fronted parakeet, and Leonardo DiCaprio’s favourite, the kakī (black stilt).

Here are the cold, hard facts. Humans introduced stoats from Europe to control rabbits in the 1880’s, against the advice of ecologists at the time. They have since run rampant over our native bird species, throwing many populations into a drastic decline. Like clever little kleptomaniacs, they sleep on beds of feathers stolen from our most treasured and rare birds.

We must eradicate stoats from areas of New Zealand if we are to have an extant bird as our national icon. The prevailing question is, how?

Never fear, the Spitfire is here! Unless you are a stoat then, yes, be afraid. The Spitfire is a re-setting toxin delivery device which was trialled in the Blue Mountains of Otago in 2013. 65 Spitfire devices were set up for approximately six weeks. Each device was capable of delivering 100 lethal doses of the stoat killing toxin PAPP (para-aminopropiophenone).

The stoat population was monitored in the area during this time using trail cameras and tracking tunnels in order to measure the Spitfire’s effects.

The project was carried out by Elaine Murphy, Tim Sjoberg and James Ross from Lincoln University, along with researchers from Wildlands, the Department of Conservation and Connovation. They found that the Spitfire knocked down 62% of the stoat population in the trial area.

The Spitfire is a very picky individual, only delivering the lethal dose of poison to a suitor of the right body size and shape. The device is able to do this due to its dual sensors. Cameras trained on the Spitfire devices during the trial in Otago recorded no instances of non-target species, such as rifleman, receiving any of the poison. PAPP has been registered for use in stoat control since 2011, but is mostly available for use in fresh meat lures, which are labour intensive to produce and expire quickly.

The 2013 trial was a success for the Spitfire and PAPP, but it was not without it’s issues. It was a trial after all! Many of the devices malfunctioned before the end of the six week trial due to design faults in weather proofing and circuitry. The conclusion was that the Spitfire showed promise, but lacked in stamina and sturdiness.

All was not lost! In 2016 the New Zealand Government announced its goal to become predator (rats, mustelids and possums) free by 2050, which led to a funding initiative called ‘Products to Purchase‘ from PF2050 Ltd. Five products were selected, based on their expected contribution to the cause, to receive funding to fast track their development to a marketable level.

In 2019, the first five successful applicants were named, and who should be among them but our voracious Spitfire. A Tauranga based start-up called Envico Technologies Ltd (ECT) went back to the drawing board with the device. They re-engineered and re-invigorated the design and produced a prototype they could now commercialise, all with the help of the funding from PF2050 Ltd.

The Spitfire was back in the game, with the new design finalised in 2020. The latest model promises a longer lifespan of one year, during which no maintenance or refills are required. It’s widely known that the main cost in stoat control is in the field hours with bait station and trap operations, so this hands-free option is looking like an economical as well as an effective choice.

Also on the toolbelt of the new Spitfire model is a bluetooth data logger, which records the date and time of trigger events. ECT envisions this feature being highly beneficial for monitoring pest populations and assisting with re-invasion events in eradicated areas. Because of it’s long field life, the Spitfire becomes an attractive option for use in more remote areas where previously the only viable option has been aerial 1080 drops. If you have a ‘Ban 1080’ bumper sticker, this product may be for you.

Just when you think it can’t get any better, a distinct advantage of the Spitfire is that there are few issues with alternative food sources or bait shyness. Stoats don’t have to bite, pull, stand on a treadle, or count backwards from 100 to receive a lethal dose. They are simply drawn in by an automatic lure dispenser that keeps a delicious mayonnaise paste coming all year-round.

The Spitfire is an intellectual. It has smart capacitive sensors that can detect and measure anything that is conductive. It can tell the difference between the long sausage body of a stoat and a little compact rifleman, preventing our inquisitive native species from receiving the toxin. When the Spitfire senses a stoat it launches a lethal splurge of toxin onto the abdomen, after which the animals are instinctually driven to groom off the mess.

ECT joined forces with the Department of Conservation and Boffa Miskell to conduct field trials from 2020-2022. Alongside the stoat design, a model specifically for our Australian foes, the brushtail possum, was also trialled using a Diphacinone and Cholicalciferol toxin instead of PAPP.

Field trials are about to conclude for the Spitfire and ECT are expecting to roll out the finished product at $200 a piece. There is also talk that a rat specific Spitfire is now in the works! This innovative technology is paving the way for more effective pest control not just here in New Zealand but worldwide. Conservation groups get your wallets ready and watch this space!

For more information, see the article on the Sptifire trial in Otago and follow ECT to keep up with their latest technological solutions for conservation!

This article was prepared by postgraduate student Katherine Turton as part of the ECOL 608 Research Methods in Ecology course in her Master of Pest Management degree.

What’s next for R&D in health for Africa?