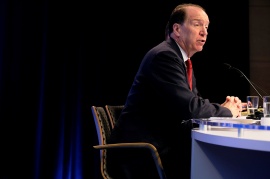 On Wednesday, July 13, the Global Economy and Development program at the Brookings Institution convened a panel of experts to answer pressing questions on the state of the global economy. David Malpass, president of the World Bank Group, delivered introductory remarks on the deteriorating global growth outlook, touching on energy and food insecurity, capital misallocation, stagflation, and more.

Below is the full text of President Malpass’s remarks.

DAVID MALPASS: Thank you very much, Coul [Moderator – Brahima S. Coulibaly] and thank you to the Brookings Institution. And thank you ladies and gentlemen for joining us today to discuss the state of the global economy. I wish I had a brighter image of where the world is going.

The world is facing multiple crises, including the sharpest slowdown in GDP growth in 80 years, the risk of a frozen crisis in Ukraine due to Russia’s invasion, and a massive worsening in global inequality as advanced economies absorb the limited supplies of global capital and energy.

Global growth is not expected to rebound in 2023, given energy supply constraints; the long overdue normalization of interest rates and bond yields in the advanced economies; and the misallocation of investments that has pushed much of the world’s savings into bonds, mostly bonds issued by governments and overcapitalized borrowers.

The global economy is also facing significant downside risks. These include intensifying geopolitical tensions, the fragility in many countries, the potential for an extended period of stagflation, the widespread financial stress that’s caused by the higher borrowing costs, and food insecurity.

In a recent Churchill Symposium speech I gave at the University of Zurich, I described two major factors in the crisis and some of the World Bank Group’s response. I’d like to summarize those briefly, and then I know there’s going to be a great discussion with Ayhan [Kose] and the panel about the global economy.

One of the things that is very important in the current crisis is the overreliance on Russian energy and then the redirection of global energy. I described in that speech the tradeoff that Europe is making, and the advanced economies in general, as they store fuel and food for next winter. China is the world’s biggest storer of grain and has continued to increase those stockpiles. Europe is storing huge amounts of energy now for the winter.  The tradeoff that creates is global fertilizer markets don’t have the energy, the natural gas, needed to make the fertilizer to make the crops and to build the storage for their own use into next year.

Global food insecurity is worsening. As we’ve seen, the electricity supplies are diminishing because of the shortage of natural gas, which is the swing provider of electricity around the world and in country after country. Those shortages then leave the grids in brownout and in blackout conditions, which undercuts the production efforts of those countries. We’re looking at a crisis that, on the production side, will extend into 2023 as the world searches for ways to bring enough capital to bear to increase the production of energy and fertilizer and enable the agricultural system.

All of this can be done in ways that are cleaner, greener, and that reduce carbon intensity in the global supply chains. But at present conditions, that’s not being done. We have to look into 2023 with this trade-off continuing where Europe, and advanced economies in general, use up much of the cleaner fuel. That leaves many parts of the world reopening their coal-fired plants or extending the life of some of the most carbon intensive coal-fired power plants. This comes at a time when electricity grids in many of the world’s countries haven’t been strengthened to absorb the renewables that are needed. You end up with a global electricity crisis on top of the food, fuel, and fertilizer crisis that I’ve been describing.

The second area that I wanted to raise is on the monetary policy side. The major central banks moved further away from monetarism in many recent years. Some of them entirely removed the reserve requirement on banks and adopted a post monetarist framework in which central banks both regulate and allocate capital, rather than controlling the money supply through bank reserves. That’s been a major shift in the global economy over the last decade. The regulatory framework has the explicit bias that debt of advanced country governments is considered zero risk, while other debt especially of small businesses  and developing countries, and of new entrants to the market, is treated as risky and requires costly bank equity capitalization.

Separately, that process has caused a huge misallocation of capital in the world to the safest issuers of bonds and away from the places in the world that need new capital.

Separately, the purchase and ownership of bonds by central banks, which continues to this day in giant size, allocates capital from small bank accounts—that’s the providers of the bank reserves that the central banks are drawing on, .since the liability of the central banks is bank reserves which come from banks. They draw on that and shift it to bond issuers. The result of that is to increase asset prices in overcapitalized sectors of the advanced economies.

From an inequality standpoint, this framework misallocates capital, it favors those with higher net worth at the expense of broad-based growth. That was already evident before the COVID crisis and it was evident before Russia’s invasion of Ukraine. These are challenges in the global system that need to be addressed. If the anti-inflationary policies that are now getting underway are primarily achieved through interest rate increases, it risks deepening the inequality that is so problematic in the world.

Stagflation could worsen. It’s exacerbated by shortages of the working capital needed for small businesses and supply chains. We have a system patently set up that diverts capital to the big players and not to the small players that provide this solution to the current inflation problem.

There are important additional tools that policymakers could be doing on the monetary front. They could and should encourage a very strong supply response to counteract the price increases that are underway. The most available increases in supply are in the largest economies. That’s a fact of the mathematics and also of the availability of capital.

The United States has the biggest ability in the world to expand production to counteract the global inflation underway. Not enough steps are being taken to dramatically increase U.S. production of supplies that are in shortage. But that’s also true of China, the second largest economy, and of Europe also—in combination, a very large portion of the world’s economy.

I wanted to go through those challenges in detail. And then I wanted to give you a little sense of what the World Bank has been doing in order to respond to these clear crises going on around the world. We’ve tried to be in the forefront of efforts. I speak to the world leaders about these problems, about the need for massive new production in the advanced economies in order to counteract inflation; also about the misallocation of capital coming from the macro frameworks in the world.

What the World Bank is able to do and has done is very large, early support for the people of Ukraine. We continued that even yesterday with a $1.7 billion disbursement that came from money supplied by the U.S. That’s on top of the $1.3 billion disbursement late in June also provided by the U.S. We were supplying our own funding early in the war effort, and that’s helped sustain people in Ukraine, the pensioners, the hospital workers, and government workers in Ukraine. We’re in the process of mobilizing more for Ukraine as the war persists.

On the food front, we’ve entered an alliance with the G-7 presidency—which is Germany this year—and are providing $30 billion of resources available over the next 15 months to support interventions in agriculture, to make more climate smart, stronger systems, more resilient systems; also to provide funding for social protection. It’s very important that as the world faces this giant crisis, that subsidies be targeted and that import and export restrictions be removed, be reduced by the advanced economies—many of them have strong import restrictions that impede global agricultural markets—and also by exporting countries so that they don’t limit it.

We’re putting in emergency assistance. We’ve recently approved more than a dozen programs, including in Lebanon, Egypt and 11 countries across eastern and southern Africa to help increase the resilience of food systems and tackle food insecurity. We’re a strong advocate for good global policies in terms of subsidies, export and import restrictions, and reduction of excess supply storage.

I want to say a final word on the global debt situation and then turn back to Coul. The global debt is connected, tightly connected. to this food crisis, because of the shortage of fiscal space in the poorest countries. As you know, the DSSI [Debt Service Suspension Initiative] that was done by the G-20—and by the way, the G-20 is meeting even today and trying to work on a communique, but it’s been very difficult for the G-20 members to find consensus on any of these major topics—as we look back, the G-20 did the DSSI debt suspension initiative. All it did was defer the payments but then the interest kept compounding on those payments. And so, the countries are left with an even larger set of debt burdens.

The G-20 initiated the Common Framework for debt relief, but it has been stalled. Even this morning, Chad’s creditor committee met but was unable to make progress. We are hopeful of progress in Zambia, but that’s been one country and it’s been ongoing for over a year and a half, I suppose. We are left with giant amounts of unsustainable debt in developing countries without a methodology to reduce that debt. This means that the countries are still paying to rich creditors, and there’s not a process that’s going to allow them or help them to move into more sustainable debt territory.

That problem is one of the many overlapping crises facing the world. I wanted to end on that point, Coul. One thing that would be good for Brookings, or the U.S., or for the think tank community to be engaged in is: how do we have a major change? You know, I, the World Bank, have proposed many very specific changes that would make this situation work better. But it would be good to have a consensus on the steps that are needed in order to reduce the unsustainable debt situations and to increase the transparency of debt, new debt, as it’s taken on by countries.  And that, I think, needs to be kept in this list of major policy initiatives and endeavors that are needed as we go through these overlapping crises.

Thank you very much, and I look forward to hearing the panel and the results. Over to you, Coul.

Does media coverage influence Americans’ openness to imposing a no-fly zone over Ukraine?

PRIVATE BLOG – US Share Markets For Close of March