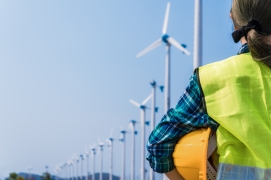 The Glasgow Climate Pact has reaffirmed efforts to limit global warming to 1.5°C above pre-industrial levels, acknowledging the commitment of countries to reduce global carbon dioxide emissions by 45 percent by 2030 relative to 2010 levels. But meaningful climate action over the next few years will be difficult as the coronavirus pandemic has left many countries with high unemployment and deteriorating fiscal space. After the sharp deterioration in employment and national incomes in 2020, average employment rates have stagnated at around 4.7 percent below pre-pandemic level. Millions of people, particularly in low and lower-middle income countries, remain out of work, so poverty rates and inequality have risen. Growing fiscal deficits are forcing governments to take a hard look at how to fund spending and whether and where to spend more. There is always the underlying fear that aggressive climate action would lead to further job losses, and its economic costs could hurt living standards of low-income households.

Not all doom and gloom

But recent evidence suggests that the situation is not quite so terrible. One of the few policy proposals that gained traction in Glasgow was the “phasing out of inefficient fossil fuel subsidies,” amounting to $5.9 trillion or 6.8 percent of GDP in 2020. Rather than hurting the poor, reversing these negative prices to upstream fuel taxes is likely to be progressive—equity-increasing. Why? Because carbon-intensive industries tend to be highly capital-intensive and getting prices right will reduce demand for capital relative to labor, causing not only capital returns to fall relative to wages, but also increasing economy-wide labor demand (cf. Goulder et al. 2018, Markandya et al. 2016).

Because carbon-intensive industries tend to be highly capital-intensive and getting prices right will reduce demand for capital relative to labor, causing not only capital returns to fall relative to wages, but also increasing economy-wide labor demand.

Figure 1. Simulating the employment effects of personal and environmental taxes

All multipliers are not made equal

How can these employment gains be explained? The size of employment multipliers of environmental or carbon taxes depend on two characteristics: how easily the country’s energy and production sectors can reduce their carbon intensity and how higher energy prices will affect labor demand. The more flexible the production structure, the easier it will be for firms to replace energy-intensive production methods with more labor-intensive ones, the stronger the demand for workers grows. In contrast, income taxes directly affect aggregate demand, indirectly increase the cost of labor, and reduce the labor share on production. Hence, the empirical analysis finds that employment multipliers tend to be negative for income taxes, but positive for carbon taxes.

Good tax design, informed by ex-ante policy analysis, can induce sectoral employment effects to be equity-enhancing, particularly when accompanied by social or labor market policies to reduce sectoral and spatial frictions. One critical lesson documented in the literature is that jobs tend to be re-allocated rather than to be lost entirely, depending strongly on policy design (e.g., Hille & Möbius 2019, Marin & Vona 2019). A recent EU Regular Economic Report shows that an economy-wide, carbon tax and subsidy reform with the revenues recycled for low-skilled labor tax cuts may, on aggregate, induce small, but economy-wide job creation, with demand for lower-wage workers disproportionately increasing (see Figure 2A, distribution across wage deciles). The underlying sectoral heterogeneity is large, with mining jobs taking the greatest hit and electricity and service-based sectors experiencing jobs growth (see Figure 2B). Empirical analyses confirm this finding of induced jobs creation in locally operating service businesses, but losses in larger, more energy-intensive manufacturing firms.

Accompanying occupational analyses shows that, while many skills can be transferrable, active labor market support, such as retraining and upskilling programs, can help facilitate sectoral reallocations of workers and avoid an increase in (already existing) skill mismatches and shortages. Social protection measures can support the regions that are experiencing concentrated job losses.

In times of economic recovery, taxes on carbon can exert less of a contractionary force on economies, presenting an efficient means to increase fiscal space and to simultaneously induce low-carbon structural change.

In times of economic recovery, taxes on carbon can exert less of a contractionary force on economies, presenting an efficient means to increase fiscal space and to simultaneously induce low-carbon structural change. In aggregate, carbon tax reforms can have net-positive employment multipliers. But the underlying sectoral heterogeneities can be large and will depend on policy design, the economic fabric of countries, integration along global value chains, and on trade partners’ climate ambition. While net job creation inherently benefits those lower-income strata that were more likely lose their job during the coronavirus pandemic, sectoral reallocation will entail various distributional and equity effects, across income groups, skill levels and occupations and spatially, between provinces and countries. Targeted social and labor market interventions can facilitate and ease the reallocations between occupations or regions and reduce frictional costs.

If You Eat Today…