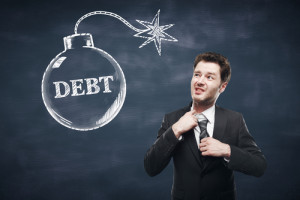 American household has reached a new high, according to a report by the Federal Reserve Bank of New York. Total household debt has surpassed $16 trillion for the first time in American history. Americans have taken on $2 trillion in additional debt since the pandemic. Aggregate household debt balances rose by $312 billion in Q2 2022 alone, marking a 2% increase from Q1.

Mortgages were the largest contributing factor to the post-pandemic uptick after rising by $207 billion to $11.39 trillion. Americans have been relying more on credit to make purchases amid inflation, and credit card balances have spiked by $46 billion last quarter. Non-housing balances saw the largest uptick since 2016 after increasing by $103 billion. Auto loans saw a $33 billion rise as the cost of autos remained at a high.

Delinquency on debt “increased modestly” in all categories. Around 95,000 people faced bankruptcy in Q2 2022, which is still near historic lows. Of the $758 billion in new mortgage debt accumulated in the last quarter, 65% is held by people with credit scores over 760. Outstanding student loan debt reached $1.59 trillion last quarter, 5% of which was delinquent.

People may be able to pay off their debt now, but as inflation and interest rates rise, that will become increasingly difficult. While mortgage debt is no cause for concern, the over-reliance on credit purchases will not help Americans lower debt. Inflation must come down for the people to maintain their quality of life.

The Rise of Libertarianism in Latin America

What happens after Roe v. Wade?