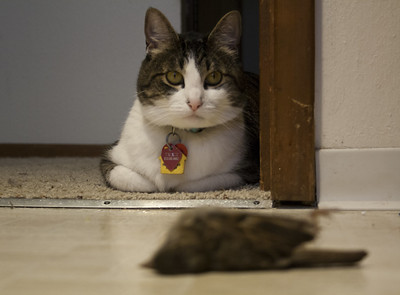 A bell on a collar is commonly used by cat owners to try to protect local wildlife. Or at least to avoid dead carcasses being presented inside the home. A study of domestic cat behaviour at the Ōruapaeroa/Travis Wetland, Christchurch, suggests that this approach may not be as effective as you might expect.

Collar-bell warning devices are likely to be largely ineffective at reducing hunting success. This conclusion was drawn after a 12-month study of 88 domestic cats living close to the 119 ha wetland reserve. This is consistent with most (but not all) similar New Zealand and overseas studies. An explanation for such a confounding outcome may be due to a cat’s tenacity and ability to easily learn to compensate for the bell. Couple this also with the likelihood that birds don’t necessarily associate a bell warning with danger.

Cat night curfew, another wildlife protection strategy required of responsible owners in Australia and promoted in New Zealand, may even be counterproductive. Many of our native species of birds and reptiles are mostly active during daylight. They hunker down and hide during night hours.

Mice and rats prefer the evening for their foraging explorations. These rodents are invasive pests that do immeasurable damage to New Zealand natives species, including birds. Since cats, by cultural convention and scientific study, are known to prey on rodents, it might seem detrimental to lock them inside at night.

Travis Wetland, is the last large freshwater wetland in Christchurch and is home to 53 species of birds. It has an estimated diversity of 700-900 invertebrate (mainly insect) species, many endemic to New Zealand. The urban cat research project at the wetland site was conducted by masters student Shelley Morgan, from Lincoln University. The study concluded that house cats in urban settings, bordering sensitive nature reserves like Travis Wetlands, do roam and incorporate these wildlands into their home ranges. There they target mostly rodent pests, but sometimes more precious native animals, like lizards and birds. Cats with bells were not any less effective in bringing home prey!

On balance, you might think that domestic cats provide beneficial services to bird populations by controlling mice and rats. This view is widely debated, with some recent studies arguing that cat predation has an overwhelming negative impact on native wildlife especially in wetlands, braided rivers and along shorelines. Furthermore, it seems likely that just a few of the moggies are particularly troublesome. Some cats are ’super-predators’, exhibiting a high tendency towards hunting, often focusing on a favoured prey. It appears that this little clowder of cats may have a disproportionate impact on threatened native species. As confronting as these uncomfortable facts are, they need to be acknowledged and solutions sought.

New Zealand has one of the highest levels of cat ownership in the world, with over half of households supporting at least a single cat. The social benefit of pet ownership, and the passion that we hold for our cats, should not be underestimated. A social licence to restrict ownership or cat movements will be difficult to achieve. Nevertheless, almost certainly within the community of cat lovers will be a myriad of ideas for limiting the danger to treasured native species.

One option is to seek agreement for a suitably sized cat-free buffer zone between urban and nature reserves. Although a risk remains that the absence of domestic cats in a halo around a wetland reserve might just encourage remaining cats in the district to prowl further and expand their hunting range.

The Royal New Zealand Society for the Prevention of Cruelty to Animals (RSPCA NZ) classifies cats into companion, stray and feral types in a recently published white paper. The organisation acknowledges the impact of free roaming cats on native biodiversity, but stresses the need to protect cat welfare and manage them humanely. The RSPCS promotes the need for cat owner self reflection, community debate and appropriate council bylaws. In the meantime, if you suspect that your beloved companion is a ‘super-predator’, perhaps consider a ‘Birdsbesafe‘ collar cover. Unlike a bell, the ‘birdsbesafe’ collar offers a colourful warning of a cat’s presence and alerts prey with good colour vision (birds and lizards).

This article was prepared by postgraduate student Andrew Wells as part of the ECOL 608 Research Methods in Ecology course in his Master of Pest Management degree.