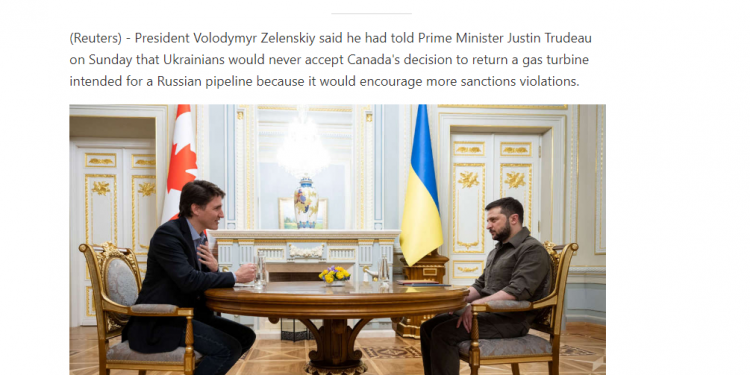 It is very interesting how Volodymyr Zelensky is doing whatever he can, not merely to destroy all of Europe, but to push the world into World War III because of his and Ukraine’s inherent hatred of Russians. He has told Justin Trudeau that Ukrainians would never accept Canada’s decision to return a gas turbine intended for a Russian pipeline because it would encourage more sanctions violations. Meanwhile, Gazprom has come out and stated that it could no longer guarantee its “good functioning” pipeline to Germany due to crucial turbines that are being held up in Canada because of sanctions.

Gazprom has declared extraordinary circumstances to void itself from all contractual obligations to Germany, whereby the gas flow to Europe will stop flowing indefinitely. Reuters reported a letter dated July 14, 2022. Zelensky thinks cutting gas supplies to Germany will force NATO to invade Russia. Kyiv will be the first to go before Zelensky can make it to his private jet to run off to enjoy the hundreds of millions he is stashing offshore.

Perhaps Germany should now invade Ukraine. It seems to be the only way to save Europe.

Our computer has been targeting here late July and August and high volatility and August as a Panic Cycle in some markets. But just about everything is going nuts into 2023. A quarterly closing above $6.25 in natural gas, which it has NOT been able to achieve this far, will confirm this is going to get much worse. Therefore, a September closing ABOVE $6.25 will be a serious warning for 2023. We had a rare Double Directional Change this quarter, so it looks like we have the most brain-dead crop of world leaders ever in human history and Zelensky, who I warned was the man who would create World War III.

Even NYC lost over 5,000 small businesses thanks to COVID. There isn’t a single decision these people are capable of making. It has reached the point that people who I know personally, who would be qualified to lead, are simply not interested due to the WOKE culture. We are simply headed into a politically created nightmare.

We see sharply higher volatility in August and the SIGNIFICANT risk of war coming in the first quarter of 2023. This is NOT something that is my personal opinion. The only thing that can actually target periods well in advance is an unbiased computer. It was Socrates that targeted 2008 as a Panic Cycle published back in 1999, which can be verified on the Wayback Machine. That was not only the Great Crash that set in motion negative interest rates theories, but it was the historical high in the euro.

The post Russia to Cut off Germany from Gas Thanks to Zelensky first appeared on Armstrong Economics.

The state of international cooperation and multilateralism: A conversation with Ambassador Linda Thomas-Greenfield, representative of the United States to the United Nations

The future of crypto regulation: Highlights from the Brookings event