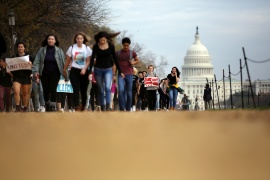 Seven months ago, Republican Glenn Youngkin defeated Democrat Terry McAuliffe in a closely watched gubernatorial race in Virginia. The story coming out of Virginia was the outsized role of education issues—specifically, critical race theory (CRT) and “parents’ rights.” But Virginia left a big question unanswered: Was education uniquely potent in that race—fueled by a debate gaffe that portrayed McAuliffe as unsympathetic to stressed-out parents—or would it linger and resurface for the 2022 midterms?

If the answer to that question wasn’t clear then, it certainly is now. Schools will feature in many races this November. And Democrats should embrace that. For all their reticence to engage on education over the last few years, it’s hard to imagine friendlier terrain for Democrats in the 2022 midterms than K-12 schools.

Since Youngkin’s win, Republican governors and legislators have run wild on culture war issues in schools. Florida alone has seen the passage of a “Parental Rights in Education” law (also referred to by many as the “Don’t Say Gay” bill) that limits discussion on gender and sexuality in schools, a “Stop WOKE” law that limits discussion on race in schools, state guidelines that withhold medical treatment from transgender children, and book bans premised on the idea that even math textbooks are infused with CRT. Nationally, school-board meetings remain contentious, with implications for who serves on those boards and what decisions they make. And now, tragically, schools are front and center again in the aftermath of the mass school shooting in Uvalde, Texas.

This isn’t the first time that schools have featured prominently in American politics. Politicians have long seized on culture war issues in schools, from the teaching of evolution to busing for racial desegregation. And K-12 education routinely ranks among the most pressing issues to voters in state and local elections. Parents care enormously about their kids—and a lot of parents vote—so we shouldn’t be surprised that education matters in U.S. politics.

But there is something unusual about today’s politics of education.

First, there’s the breadth and pace of policy activity, largely from Republicans, that derives more from political opportunism than real challenges in schools. At a time when we’d expect policymakers to be preoccupied with COVID-19 recovery efforts, we’ve seen a dizzying stream of anti-CRT and anti-trans initiatives instead. Even advocates of more conventional conservative ideas in education, like private school choice, are calling for Republicans to attach those causes to culture war battles.

Second, and related, at a time when Republicans have been assertive in K-12 education, Democrats have been astoundingly timid. On issue after issue, Democrats have stood by as Republicans nurtured extreme ideas into politically advantageous issues and, often, actions that affect students. Maybe Democrats’ motivation has been to keep from elevating or dignifying bad ideas with a response, but it hasn’t worked. Many of those bad ideas festered and then found their way into education policy and practice—and many still could, like ludicrous proposals to equip teachers with guns to prevent school violence.

Frustratingly, Democrats have repeatedly ceded the opportunity to frame these issues for the public even though most Americans would have been sympathetic to their position if they had. For example, Democrats allowed mask mandates to become a touchstone about government overreach (the Republican framing) rather than a whatever-it-takes push to keep schools open. Then there’s gun violence in schools, which in reality has always been a problem of gun violence, not schools, despite the focus on “hardening” the places were kids learn and play. There are transgender student issues—real ones, about reducing suicides, bullying, and mental health problems for an extremely vulnerable group of children—that Republicans made about a few kids playing sports. And that’s just the beginning. Do most Americans really support book bans and burnings, a “both sides” treatment of the Holocaust, or bounties for teachers who mention systemic racism? I can’t imagine they do.

If Democrats lean into these issues, they’ll find that most voters agree with them. In fact, when Politico asked Youngkin’s advisors about McAuliffe’s mistakes, they pointed to disbelief that McAuliffe’s team let Youngkin off so easy on education.

More than leaning into any single issue, though, Democrats need an overarching message on K-12 education. Republicans have deployed “parents’ rights” to great effect politically because it’s simple, emotive, rooted in concerns that many Americans have about the country today, and vague enough to justify an array of policy arguments. (I’ll dig into the emptiness of “parents’ rights” as a policy framework in an upcoming post.)

I am not a political strategist—and won’t even try to come up with a catchy slogan—but I suspect there’s a message available to Democrats that satisfies those criteria and would, to some extent, co-opt the “parents’ rights” message. It’s about sparing kids from our ugly, broken politics. If there’s one point of bipartisan agreement in recent polling, it’s that Americans are sick of politics and polarization. A CNN/SRSS poll from May 2022 indicates that more Americans are “burned out” than “fired up” about politics—and that’s true for every single subgroup reported (by gender, race, age, income, education, party identification, and political ideology).

I’d like to see Democrats actively make the case, now and in November, that we owe it to kids to keep grown-ups’ messes from spilling into their lives—and that it’s Republicans who are using schools to wage culture wars. Whether that means doing whatever it takes to keep guns out of schools or, as one Democratic strategist put it, “fighting back against Republicans who want to check your kids’ genitalia,” it’s long past time for Democrats to stop tiptoeing and start engaging forcefully on K-12 education.

Discovering Masculinity in a Woke World

If You’re Focused On Amazon’s Competition, You’re Missing the Future