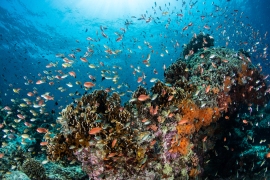 The marine and coastal areas along the eastern shores of Africa contain rich, biodiverse, and under-threat flora and fauna unique for their biodiversity. The region hosts pristine coral reefs, carbon-rich mangrove forests, and sheltered seagrass beds, which support an abundance of marine life including important fish species, sharks and rays, turtles, sea birds, and marine mammals. Moreover, all along the coasts of the West Indian Ocean (WIO) region, coastal communities derive their socioeconomic livelihoods from the sea and its products. Artisanal and commercial fishing is critical for food security and the economy of the over 70 million people living along the coast, as the region’s fishing contributes to 4.8 percent of the global fish catch, equivalent to about 4.5 million tons of fish per year. Marine assets in the WIO are valued conservatively at $333 billion and provide at least $21 billion every year to the regional economy from marine and coastal tourism, carbon sequestration, and fisheries.

Of course, the deterioration has broader global impacts too: The International Union for Conservation of Nature (IUCN) estimates that, at the global level, when coastal ecosystems like mangroves, salt marshes and seagrasses are degraded, lost, or converted, massive amounts of CO2—an estimated 0.15-1.02 billion tons every year—are released into the atmosphere or ocean, equivalent to up to 19 percent of global carbon emissions from deforestation.

In Lisbon next week (June 27 –July 1), the United Nations Ocean Conference will explore innovative solutions for solving these and related challenges and creating a regenerative blue economy. The “Great Blue Wall” (GBW) initiative, which was recently touted at the 2022 Africa Regional Forum on Sustainable Development earlier this year, is one potential mechanism.

The Great Blue Wall initiative, an opportunity to act at scale

The GBW is a major Africa-led effort toward creating a nature-positive world—one that enhances the resilience of the planet and societies to halt and reverse nature loss—by 2030. GBW proponents aim to create interconnected protected and conserved marine areas (“seascapes”) to counteract the effects of climate change and global warming in the WIO region while unlocking the potential of the blue economy to become a driver of nature conservation and sustainable development outcomes.

These seascapes will form a regional network of inclusive, fair, and productive large-scale marine-conserved areas that will deliver both socioeconomic and conservation outcomes by promoting regenerative practices and sustainable use of natural resources that benefit local livelihoods. Local stakeholders, first of which are indigenous people and local communities, will play a central role in the effective management of the connected network and will be supported in their efforts to sustainably use and benefit from natural resources. In term of figures, the GBW’s ambition is to protect 2 million km2 of marine areas, restore 2 million hectares of critical coastal and marine ecosystems, and thus help sequester 100 million tons of CO2 and create 1 million blue jobs by 2030.

The overall goal is to accelerate and upscale ocean conservation actions while building socio-ecological resilience and supporting local livelihoods. This regional ecological corridor, formed by conserved and restored critical blue ecosystems such as mangroves, seagrass beds, and corals, is intended to serve as a bulwark against the effects of climate change and biodiversity loss, as well as shelter coastal communities and create the conditions and mechanisms necessary to accelerate the development of regenerative ocean projects.

Its three key pillars include:

Notably, 2022 presents an opportunity for highlighting the issues of purposeful climate financing and aggressive environmental action in our oceans given the momentum that can be created by the upcoming Oceans Conference and November’s COP27—held in Sharm-el-Sheikh, Egypt. The WIO region specifically has the opportunity to change the current ocean protection narrative, which lacks ambition. Indeed, only 6.35 percent of the oceans are currently covered by marine protected areas (MPA), and most of these MPAs are not adequately resourced. By providing the adequate framework to connect the projects all over the WIO region, a successful GBW initiative could turn the narrative around—making the sustainable use and large-scale restoration and protection of marine and coastal resources a driver of both nature conservation and sustainable and inclusive blue economic development that directly benefits local communities and improves livelihoods, while conserving and sustainably managing marine ecosystems.

Beyond its contribution to local economies in the form of sustainable, blue entrepreneurship, the GBW can contribute to conserving and restoring critical marine and coastal ecosystems through mobilization of impact investors for large-scale corridors and networks of projects.

To guide this effort, the GBW initiative intends to support the development of regional critical ecosystem conservation and restoration strategies and action plans in order to enhance impact on the ground, as well as enable the region to sequester 100 million tons of (blue) carbon while building ecosystem-based adaptation and socio-ecological resilience.

For the GBW to deliver on its potential in such a short amount of time (8 years, by 2030), it will require the highest level of leadership and support—both from proponent countries as well as from potential supporting countries. Indeed, to achieve such levels of transformation, world leaders need to seize this opportunity and transform it into a global flagship initiative that will not only benefit the WIO region, but also potentially pave the way for other regions in the world to adopt and adapt a similar approach. Unprecedented levels of funding will have to be catalyzed and mobilized to support actions on the ground and deliver the level of impact required to achieve the GBW objectives.

Success in conservation and restoration of marine and coastal ecosystems efforts could come from the scaling up existing projects from the national level to the WIO regional level, as such an approach can secure access to additional and complementary climate finance possibilities while strengthening necessary ecological connectivity. Setting the financing framework and mechanisms should therefore be a policy priority for the institutions supporting the GBW.

At the country level, the governments of the WIO region, in collaboration with the relevant partners, should strengthen their institutional capacities for marine resources and conserved areas management, to take advantage of the GBW and operate efficiently within the framework of regional corridors for ecosystem conservation and restoration. Central government and public agencies will have to play a pivotal role in national and regional coordination and collaboration. It is, therefore, critical to strengthen and/or create such regional coordination and collaboration mechanisms. At the local level, it is clear that to deliver conservation and socio-economic impacts at the scale required, first and foremost local stakeholders, local communities, and indigenous people will have to be empowered and given the rights and the means to become the managers of the regenerative seascapes that will be established within the framework of the GBW. It is therefore urgent for countries, in partnership with local stakeholders, to develop, adapt, and establish these necessary participatory and democratic seascape governance mechanisms.

Local entrepreneurs will also have a crucial role to play in creating and establishing the necessary regenerative businesses and economic activities that have the potential to become one of the most powerful drivers of both socioeconomic and conservation outcomes. It is therefore critical to establish adapted support mechanisms in order to provide them with all the help required to accelerate and scale up such efforts—from venture building programs to incubation and acceleration mechanisms, from dedicated investment facilities to the necessary enabling environment and legal framework.

Donors and funding partners also have a decisive role to play in this effort. Ultimately, none of the GBW objectives will be achieved if an equivalent level of resources is not mobilized. Heads of states can play a critical role in such mobilization effort. Most large-scale funding mobilization, such as the one announced in support of the Great Green Wall at the One Planet Summit for biodiversity in 2021 or the one in support of the conservation and restoration of the Congo Forest Basin announced during the United Nations Framework Convention on Climate Change COP21, have been led by heads of state in partnership with multilateral agencies and philanthropies.

Ultimately, the GBW is here to tell a story. A story of countries rising up to unprecedented challenges and building an unprecedented solution. A story of local people, waking up every day to fight the good fight and implement the solutions we so desperately need. And they’ve been doing it for so long with such a limited level of support and virtually no recognition. The GBW is here to tell their story, to give a voice to the unheard, to shade a light on the unseen, to bring awareness about the unknown, and unlock a tsunami of support. People are now rising to these challenges faster than the sea levels themselves are rising, but they aren’t there yet. That’s what the GBW is for—to accelerate these efforts.