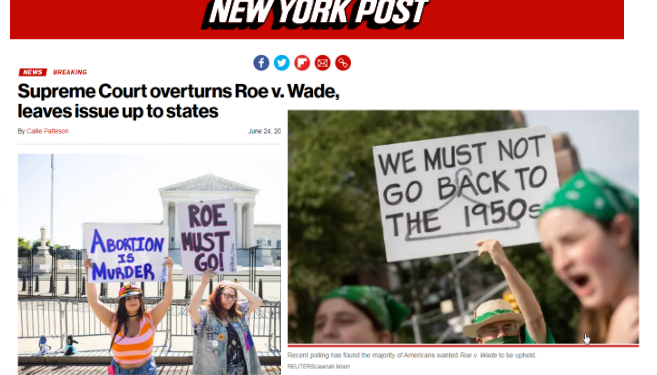 Roe v Wade is correctly overruled not because abortion itself for the court did not overrule that superficially, but instead, it held:

“The Constitution does not confer a right to abortion; Roe and Casey are overruled; and the authority to regulate abortion is returned to the people and their elected representatives.”

The entire decision rested on a right to privacy which was created in Griswold v Connecticut whereby they tried to outlaw contraceptives. The question turned on the inability of the state to enforce such a law because it would have required a state official to observe a sexual act and that you complied with not using a condom. It was a real stretch to extend that right to abortion.

The defense of Roe v Wade is actually hypocritical for the Democrats. The main support comes from Gates and Rockefeller Foundations and it is covertly supported by the United Nations. This is all about the Planned Parenthood agenda to provide abortions to minorities to reduce their population. Now you may think I am being a conspiracy theorist. However, back in 2009, Justice Ruth Bader Ginsberg bluntly told the truth, when she was for equal rights for women.

“Frankly, I had thought that at the time Roe was decided, there was concern about population growth and particularly growth in populations that we don’t want to have too many of.” She spoke bluntly in an interview published in the New York Times Magazine which was an article on women on the court. So it was not simply a woman’s rights agenda. That was the cover story to hide the real agenda which has always existed – eugenics and to reduce the population of the minorities.

There is NOTHING in the Constitution that guarantees any right to an abortion. There is a huge difference between STATUTORY law and CONSTITUTIONAL law. The former is acceptable as long as it does NOT violate the latter. This decision is throwing it back to the States BECAUSE this is a matter for STATUTORY law – not CONSTITUTIONAL any more than putting up a stop sign by the local municipality.

This is a MAJOR victory because it is striking down the entire program of Planned Parenthood that Gates’s father was the head of and the offices were strategically placed in poor, minority regions, for the very purpose of promoting abortions to reduce the population.

It is hard to comprehend how some women because brainwashed into thinking they had some Constitutional right to abort a child whenever they felt like it which was a clever sales job of Gates and the Rockefeller Foundation. This is like Schwab now saying you will own nothing and be happy pretending again this is all for you when in fact it is to hide the agenda of the government defaulting on their debts. It is the same trick of insurance companies. They sell you fire, earthquake, flood, theft, and accident insurance but they could NOT sell DEATH insurance for people who felt it was bad luck so they flipped the name and called it LIFE insurance. Gates and the Rockefeller Foundation convinced women it was their RIGHT to abort a child and how dare anyone say otherwise – so go ahead and assert your womanhood! Great mind game to say the least.

Something to Celebrate: Beavers Return to Sonoma Creek

P.J. O’Rourke Taught Me How ‘Unfairly’ Great American Life Is