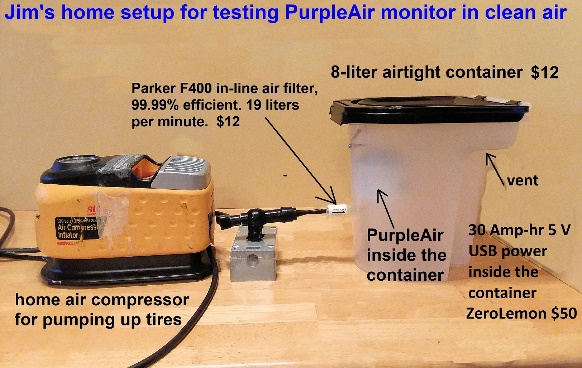 A decade-long volunteer of Sugarloaf Ridge State Park, Dr. Jim Ouimette, is lead author on a paper in the February edition of the International Journal of Atmospheric Measurement Technology for European Geosciences. His research, which began at Sugarloaf Ridge State Park, has uncovered new information about how a commonly utilized sensor for monitoring air quality works.

Many in our region are familiar with PurpleAir sensors. The website www.purpleair.com is frequented locally to check air quality on the internet, particularly during the county’s annual fire season. Jim and the team of contributing scientists have shown new discoveries about how these sensors work, which is somewhat different than was originally understood. With the publication of this research, PurpleAir sensors stand to increase global knowledge about the clarity of the air in a simple, unprecedented way.

Jim volunteers his time at Sugarloaf Ridge State Park as a park steward. Among his many contributions to the park are development of an ecologically sound and safe way to recycle the park’s propane canisters, improving Team Sugarloaf’s radio communications system at the park, working on the park’s initial emergency plan, and helping create a second camp host site. “When you combine Jim’s energy, intelligence, and determination, the number of things that he can get done is incredible” says John Roney, Park Director.

Adding to his list of accomplishments at Sugarloaf is a scientific finding, which began one day when Jim took an interest in a sensor that fellow volunteer, Don Lehrman, had noticed. These relatively inexpensive devices, called PurpleAir sensors, measure particulates in the air, a process related to Jim’s PhD research at Caltech. Intrigued, Ouimette bought his own sensor to run on Bald Mountain, the high point at Sugarloaf, to measure air quality through California’s devastating 2018 fire season. Running from a simple car battery for one month, the sensor was quick to detect the Paradise Fire’s initial smoke plume. Jim was able to determine that the first particle size channel (>0.3 um) of the PurpleAir device was even more sensitive than the commonly-used PM2.5 channel.

Jim proceeded to run further tests in his own garage, and continued to be impressed with how well they detected low concentrations of particles. He conceived an idea for a formal study and began outreach to members of the scientific community. What Jim sought to find out was how a PurpleAir sensor behaved in comparison to a nephelometer, an expensive instrument that measures light scattering – a measure of how far we can see.

Through partnerships with scientists Dr. Patrick Sheridan of  NOAA’s Global Aerosol Monitoring Network at NOAA, and Dr. Bret Schichtel in the National Park Service’s Air Resources Division, Jim received permission to install PurpleAir sensors next to nephelometers at NOAA’s Mauna Loa Observatory and Great Basin National Park. The initial data gathered was convincing; PurpleAirs and nephelometers agreed quite well in their measurements. “We took a look at the first month of data and were shocked at how well the little PurpleAir tracked their expensive nephelometer at these extremely low concentrations… Its successful operation at such low concentrations is a highlight for me. I still have the Mauna Loa PurpleAirs in my office and will always keep them near me!” says Jim.

Dr. Sheridan of NOAA, also intrigued by the data that was being gathered by the PurpleAir sensor at Mauna Loa requested that another sensor be set up at NOAA’s Table Mountain, CO, Test Site, where it could be put through more rigorous testing to see if it responded differently to various particle sizes. When the PurpleAir sensor did indeed respond sensitively to an array of particle sizes, the project was recognized and presented at the Annual Meeting of the American Geophysical Union in San Francisco, in December 2019.

By 2020 there were five collaborators working on data being gathered by PurpleAirs across the US, and the project grew with the momentum of each encouraging finding. “We were suggesting that we try to understand fundamentally how the PurpleAir worked,” says Jim. The team looking into how PurpleAirs work included world-renowned experts in nephelometers and three physicists, including Jim. “We independently created our own mathematical models to predict how the PurpleAir would respond to various particle sizes. The three of us argued about our models for a couple months until we came to agreement.” It was concluded from the resulting evidence that the PurpleAir sensor acted like a nephelometer, and not like the optical particle counter that it claimed to be.

In early 2021 the team wrote up the results gathered from Mauna Loa, Table Mountain, and controlled laboratory experiments at Colorado State University which confirmed the mathematical model. The article was submitted for peer review on June 21, 2021, and accepted to the International Journal of Atmospheric Measurement Technology for European Geosciences this February, 2022. The article has received over 3,000 views from around the world.

What ultimately is the impact of this new information about the PurpleAir sensors? Currently there are about 10,000 PurpleAir monitors around the world. The small, inexpensive sensor agrees very well with expensive nephelometers and other atmospheric monitors. This helps NOAA, because there are not many nephelometers running continuously in the US or around the world. If the PurpleAir can report a reliable aerosol light scattering coefficient, then NOAA can fill in a lot of gaps on the world map where there are currently no data because traditional instruments are not there. This huge increase in data points will help improve aerosol modules in general circulation, and chemical transport models for modeling global climate.  Improving the predictive capability by improving the quality and quantity of real-world aerosol observations is a key objective for NOAA. You can go online and see this on the PurpleAir map.

What ties the entire discovery together, and the factor that ensured its ultimate success, is the collaborative nature of the endeavor, from its local start at Sugarloaf Ridge State Park to its international conclusion. “Sugarloaf Ridge State Park is a volunteer-powered park, and we are constantly impressed by the expertise our volunteers bring. Dr. Ouimette exemplifies the point that volunteers are highly skilled labor, and that when given space to contribute creatively, skilled volunteers do amazing things.” Says Dr. Dan Levitis, the park’s volunteer coordinator.

Ouimette concludes, “when friends and family ask me about my experience with PurpleAir and the research collaboration, my first response is gratitude. I am joyfully surprised at the Sugarloaf connection and what we rapidly learned. Secondly, I was joyfully surprised at how dedicated government scientists took a risk and allowed me into their world and then collaborated to success.” And certainly without the united teamwork of scientists across the globe, and a shared passion for scientific pursuit, there would be less understanding of the world, including of the clarity of the air we breathe.

How to Think about Inflation

US Celebrates Alliance With Seoul: But Is South Korea Worth a Nuclear War?