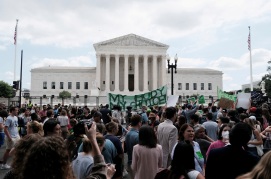 What do Americans think about abortion, and how will they react to the Supreme Court’s decision to overturn Roe v. Wade? Although the relationship between attitudes on abortion and on Roe is complex, recent surveys suggest some clear conclusions.

Although some Americans have absolutist views on abortion, most believe that its acceptability depends on circumstances.

Roughly speaking, between 25% and 35% of Americans think that abortion should always be legal, 10% to 15% think it should never be legal, and the remaining 50% to 65% are split between those who think that it should be mostly legal with some exceptions and mostly illegal but with exceptions.

There is broad agreement about the circumstances that warrant abortions and those that do not.

Supermajorities believe that abortions should be permitted when the life or health of the mother is endangered, when the fetus has severe congenital abnormalities with little or no life expectancy, and when pregnancy is the result of rape or incest. Large majorities reject abortions when a married women wants no more children, when an unmarried woman does not want to marry the father, and when a family has low income and cannot afford another child. By contrast, Americans are divided on whether abortions should be permitted when the child would be born with significant but not necessarily life-threatening physical or mental disabilities.

The timing of abortions makes a big difference.

A recent Gallup survey found that support for broadly available abortions decreased from 67% in the first three months of pregnancy to 36% in the second trimester, and just 20% in the third. In a similar vein, a recent Pew Research Center survey found two-to-one support for legal abortions when the fetus is six weeks old, two-to-one opposition when the fetus is 24 weeks old (roughly the age of viability), and a divided opinion when the fetus is 14 weeks old. The most recent Economist/YouGov poll found that by a plurality of 46% to 37%, Americans support banning abortions after 15 weeks, the linchpin of the Mississippi law that triggered the case the Supreme Court just decided.

The perception of a rising threat to Roe v. Wade appears to have triggered increased support for abortion rights among Democrats.

In its most recent survey, Gallup finds that support for abortion without restrictions increased to a record high, as did the share of Americans who identify as “pro-choice.” These shifts are almost entirely the result of changing sentiments among Democrats. For the first time ever recorded, a majority of Americans now regard abortion as “morally acceptable.” And 56% of Democrats now regard abortion as a “very important” issue, compared to just 42% of Republicans.

The decision by the Supreme Court to overturn Roe will not enjoy majority support.

When Americans are given the choice between overturning Roe and leaving it as it is, between 55% and 60% choose the latter option. When overturning Roe is described as eliminating a “constitutional right,” support for leaving it untouched is even higher. When the choice is characterized as preserving Roe versus returning the matter to the states, the margin in favor of leaving matters as they are shrinks. Even so, when Americans are given the choice between a national standard for abortion and a variety of state laws, they opt for the former. And this means a national standard generally favoring abortion rights. A CBS/YouGov poll found that 58% of Americans would favor a federal law protecting abortion nationwide, while only 33% would support a federal law banning it nationwide—a proposal opposed even by a majority of Republicans.

If Chief Justice John Roberts had gotten his way, opposition to the Court’s decision would probably be less heated.

The draft opinion leaked in early May showed that Roberts did not join the five-justice majority in favor of overturning Roe. He favored a middle position accepting the constitutionality of the Mississippi law banning nearly all abortions after 15 weeks while leaving the general framework of Roe intact—a position favored by a plurality of Americans. If the Chief Justice had persuaded one member of the initial anti-Roe majority to join him, many Americans on both sides of the debate would probably have experienced feelings of relief, and the intensity of the opposition would have diminished.

But now that Roe has been entirely overturned, the data presented in this article suggest that many Americans will protest, and some dispirited Democrats who might not otherwise have participated in the midterm elections will be motivated to vote.

Although abortion is not the top concern for most Americans, it is important enough to make a difference at the margin. And in a closely divided electorate, what happens at the margin counts.

Leave Me Alone and I’ll Make You Rich, Part 1

What Can the US Learn from Argentina’s Inflation?