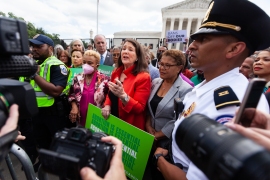 As news of the Supreme Court’s decision overturning Roe v. Wade spread through a meeting in Washington D.C. this morning, someone was heard to say, “Game on.” And so, it is—on two fronts. The first will be enforcement provisions in state laws and the second will be for control of Congress as the fight moves from state legislatures to Congress.

The first front will be a state-by-state fight between states that fall into two distinct groups. In fifteen states, so-called “trigger” laws will mean that a total or near total abortion ban will go into effect almost immediately.

In other states, governments are gearing up to remove statutory and regulatory impediments to abortions in order to open their doors to hundreds if not thousands of women who will not be able to get abortions in their own states.

Most of the states that seek to ban abortion also seek to ban information that would enable a woman to get an abortion. For instance, states like Texas, Idaho and Oklahoma allow private citizens to sue and recover damages of $10,000 from anyone who helps someone get an abortion. Practically, this means that abortion providers and women’s health centers cannot help anyone who is seeking an abortion. But it also means that someone’s neighbor or classmate, seeking a quick windfall, could tell on a woman who has provided information about an unwanted pregnancy, sue, and collect money.

The enforcement provisions are likely to constitute the next great battle in the abortion wars. While some states have been working to ban abortions and prohibit people from even talking about it—other states have been building safeguards from prosecution into their law and passing regulations to expand the number of abortion providers to meet what will surely be an out of state influx of patients. Earlier this year, the state of Maryland had already passed legislation to train additional abortion providers. On the day of the Supreme Court decision, the Connecticut Attorney General said that the decision “carves our nation in two.”

And on that same day, the Republican Governor of Massachusetts, a pro-choice state, signed an executive order banning state agencies “…from assisting another state’s investigation into a person or group for receiving or performing abortions that are legal in Massachusetts or extraditing those patients or providers. The order addresses laws imposed in states that criminalize abortions and other services.”

The immediate effect of this bifurcation between states will be to create a different kind of Underground Railroad, which operated in the years before the Civil War to guide slaves out of slave states to free states. Groups are already forming in states that provide abortions to raise money and help provide safe passage to women from states that ban abortions. All of this will need to happen quietly and without fanfare to prevent civil suits in states that allow private citizens to sue those who help women get abortions.

As the new underground railroad expands and figures out how to reach the poorest and least educated women (the biggest challenge) pressure will increase for federal action on abortion since states cannot enforce their laws in another state. In order to find a precedent for this situation we need to go back 172 years to before the Civil War. As the Underground Railroad grew in size and effectiveness Congress was pressured to act. Federal action was necessary in order to allow slave owners from a slave state to go into a free state and search and capture their slaves. The result was the Fugitive Slave Act of 1850 which allowed for the capture of runaway slaves and return to their “owners” in the slave states. It also imposed penalties on people who assisted fugitive slaves and it even went so far as to impose heavy fines on federal marshals who refused to comply or from whom slaves escaped. Although many of the free states refused to enforce the law and passed laws called “personal liberty laws” that were meant to weaken the federal law, the federal law superseded state laws and many slaves were returned right up until the law was finally removed near the end of the Civil War.

The next battle for the pro-life movement will be to seek a federal ban on abortion, moving the fight from state legislatures to Congress. In today’s closely divided Congress nothing like this is likely to pass. (Democrats who were clamoring to remove the filibuster will now be happy that they failed.) But the electoral battles will be on. As Bill Galston’s piece in these pages illustrates, while public opinion towards abortion is complicated and nuanced, only 33% of the public supports a national abortion ban.

Suddenly the battle for control of Congress may take on a new urgency—especially among Democrats and younger voters who previously had not been very enthusiastic about the upcoming mid-term elections. The reversal of Roe v. Wade so close to the midterms could in fact save the Democrats from what was looking like a disastrous election year.

But even if the impact on this year’s elections is minimal, now that the abortion issue is back in the states, it’s bound to have continued relevance for electoral politics from the state house to the presidency. Today’s actions are just the beginning.

The state of international cooperation and multilateralism: A conversation with Ambassador Linda Thomas-Greenfield, representative of the United States to the United Nations