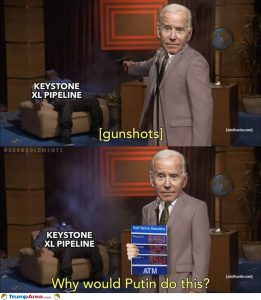 Vladimir Putin is not suffering from sanctions. The West has shot itself in the foot by banning essential Russian imports without an alternative in place. “They even named inflation after me,” he joked, hinting at the “Putin price hike” western politicians have been declaring.

The difference now, according to Putin, is that the West attempted to shun Russia. “In the Soviet times when we cut ourselves off, created the so-called Iron Curtain, we created it with our own hands,” he admitted. Putin admitted the Iron Curtain was a mistake that he has learned from. Anyone claiming Putin is pro-Communist or eager to bring back Cold War-era policies is sadly mistaken.

As I have mentioned, Russia has created a new G8. They have alliances with Brazil, Indonesia, China, Mexico, Iran, and Turkey. They claim that this new G8 will not partake in sanction wars and noted that they are already 24.4% ahead of the former G8 in terms of GDP per capita. They are welcoming new alliances as well. Countries previously begged to join Western coalitions, but they are now failing due to a flawed design from the outset. All of this is part of what our computer has been indicating – the financial capital of the world is beginning to drift from West to East.

The post Putin: They Even Named Inflation After Me first appeared on Armstrong Economics.