Eli Bendall: Not so tall (tree) tales from the glasshouse 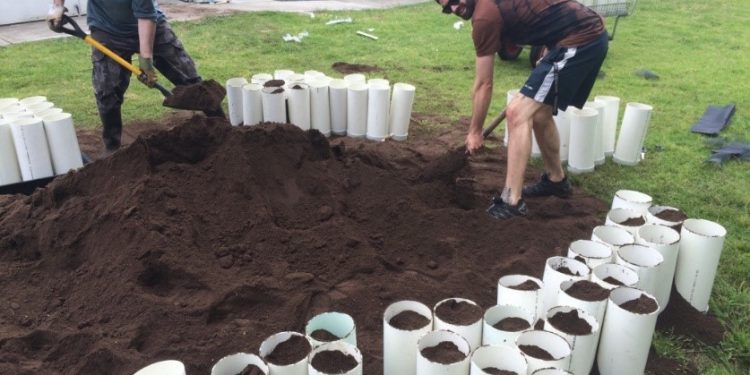 In this new post, Eli Bendall from Western Sydney University presents his last paper ‘Growth enhancements of elevated atmospheric [CO2] are reduced under drought-like conditions in temperate eucalypts’. He discusses the interacting impact of CO2 rise and drought for woody plants, highlights why sunny days can be problematic for ecologists, and shares his unconditional love for eucalyptus.

Our work investigated the interacting effects of elevated atmospheric [CO2] (i.e. ‘eCO2’) and drought-like conditions on the seedlings of nine different eucalyptus species. These species represented three distinctive temperate vegetation types with differing moisture regimes, e.g. from wet to dry. We say ‘drought-like’ conditions because in the glasshouse environment it is not a true ecological drought, i.e. a real drought experienced in a natural ecosystem. Rising CO2 levels are a consequence of anthropogenic climate change, and eCO2 is a known driver of increased growth in woody plants. However, there is variability in responses across taxa and there is uncertainty in how other climate change effects, such as increases in drought, may interact with eCO2 to influence plant growth. Variable responses will have consequences for the composition, structure, and function of future plant communities. For example, if drought imposes limitations on eCO2-growth enhancement, will the inherent variation in drought adaptation across species from different environments favour the growth of some species over others? This is a particularly interesting question for landscapes that have a matrix of vegetation types that exist across gradients of moisture availability. How will the vegetative makeup of these landscapes change as the climate rapidly shifts into unknown territory? Fire-prone forest environments that experience episodic drought often contain species with specialised adaptations to store resources that allow regeneration of new foliage following disturbance. If these ‘resprouters’ can utilise eCO2 to more rapidly accumulate resources in the early stages of life as a seedling, then this may give them a better chance of persisting through disturbances.

Loading up our built-for-purpose pots with the soil mix while we wait for the seedlings to germinate and grow a little (Credit: Graham Bendall)

We were particularly interested in finding out if eCO2 X drought responses varied between vegetation types, potentially reflecting the inherent differences in drought adaptations between species. To help answer our research questions we measured biomass accumulation, responses associated with resource acquisition, and the size of storage organs used to resprout new foliage following disturbance. We found that eCO2 increased biomass accumulation, but that drought reduced this effect, with mesic species experiencing larger relative reductions in biomass accumulation. In the absence of drought, eCO2 increased the size of the storage organs that many eucalypts use during post-disturbance resprouting. Some typical physiological responses to drought, such as increased leaf mass per unit area and root to shoot mass ratio, were most pronounced in the xeric species. In these species, eCO2 had the effect of ameliorating the drought effect. Though our study looked only at seedling and the establishment phase of seedling growth, we concluded from our study that seedling growth and resprouting may be enhanced by eCO2. In the context of a natural ecosystem, this could indicate the dominance of resprouting functional-types in disturbance-prone ecosystems, although severe drought is likely to offset the eCO2 fertilisation. Xeric species may cope with drought more effectively under eCO2 than mesic species due to resource acquisition and storage traits that are more responsive.

Seedlings following germination, prior to being transplanted into the glasshouse (Credit: Eli Bendall)

This experiment was a component of my PhD at the University of Wollongong and the glasshouse facility and lab were provided by the Hawkesbury Institute for the Environment at Western Sydney University. Naturally, the concepts and work was the result of a collaboration between researchers and institutions. Essentially, we identified that there was a gap in the literature surrounding the potential variability in eCO2 X drought responses across plant communities with varying levels of drought adaptation. While there have been numerous papers addressing eCO2 effects or eCO2 X drought or temperature effects on plant growth or other physiological responses, there had not been a large-scale comparison of eCO2 X drought effects across vegetation types, in our case represented by their dominant canopy species.

Our paper would be of interest to ecologists broadly, and specifically of interest to plant physiologists with an interest in climate change, forest ecologists, ecological modellers and land managers who are faced with the realities of working in and planning the management of forests that are destined to change with our climate. Changes in patterns of growth rates, establishment success and post-disturbance resprouting dynamics will have implications for our expectations, observations and predictions.

Our study only examined seedlings grown under controlled conditions for a short period of time, so it is not clear how these effects may translate to natural forest ecosystems. With this caveat in mind, we may speculate that future scenarios of coupled changes to climate and disturbance regime could lead to major shifts in vegetation composition, structure and function, thus potentially reducing carbon storage within forests, which may accelerate climate change and result in further changes to vegetation.

Fortunately, we had no major impediments to setting up our glasshouse experiment. We had a string of days where the temperatures outside of the glasshouse exceeded 45°C (as high as 47°C!) during the experiment. This caused some alarm because if the air conditioning system were to experience prolonged failure in those temperatures it could have affected the plants. Fortunately, we had no disasters in that respect. However, arriving to the glasshouse at 4am to begin pre-dawn water potential measurements twice in both weeks was a little challenging though.

The big questions that still remain are 1) how do the responses translate to natural ecosystems? And 2) do eCO2-related increases in resprouting capacity (i.e. via increases in storage organ size) result in increased resprouting success following fire? We devised a potential method to address this question in the glasshouse environment, but ultimately the idea did not come to fruition (happy to discuss this one with anyone who is interested, just shoot me an email).

My interest in the natural world began at a very early age, as I grew up in a house set among gum trees with abundant flora and fauna. Though I pursued many interests in my earlier years, I ultimately settled on a career in forest and fire ecology due to my love for big, beautiful eucalyptus trees, and after seeing the forests of my region devastated and then regenerate multiple times throughout my life. There are simply too many questions that haven’t been answered!

I am currently employed as Research Assistant at Western Sydney University, carrying out field campaigns monitoring drought recovery of trees and post-fire tree mortality across south-eastern Australia. I am also employed as a Conservation Officer with the Australian Government, assessing ecological communities that have been nominated for listing as threatened under national environmental law. I am also employed as a Learning Officer with the New South Wales State Government, delivering curriculum-based science lessons in an outdoor setting at the Botanic Gardens in Greater Sydney.

My greatest inspirations for pursuing ecology have been Sir David Attenborough, and Australian conservation advocates Steve Irwin and Harry Butler. My tip for other ecologists is to always plan for every potential problem and unexpected event, and always have a plan B (and maybe C)!

The Location Guide, Filmmakers for Ukraine and EUFCN join forces for fundraiser at Cannes 2022

The Program Stewarding in a Renewed Passion for Climate Action

The Program Stewarding in a Renewed Passion for Climate Action

Lions and Badgers and Bears: The Team behind Sugarloaf’s Amazing Wildlife Footage