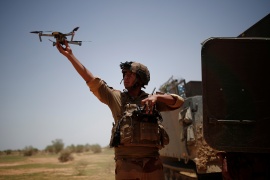 Following 9/11, the United States ushered in the use of armed unmanned aerial vehicles, or drones, to kill terrorists. Scholars have studied the United States’ use of drones for two decades. Indeed, the Bureau of Investigative Journalism, New America Foundation, and other watchdog groups aggregate data for U.S. strikes. Yet aside from UK Drones and the Yemen Data Project, few databases exist to account for other countries’ adoption of drones.

To bridge this information gap, we compared how varying a country’s specific use and constraint of drones shapes the public’s perceptions of legitimacy, which scholars suggest can influence political officials’ use of force abroad. We focused on the United States as a benchmark and included France, which has conducted dozens of strikes in Africa — namely, Mali — since December 2021 alone. French citizens, then, provide a convenient litmus test for non-U.S. perceptions on the use of drones.

Our research consisted of a survey experiment and resulted in three key findings. First, variation in how a country uses and constrains the use of drones can shape perceptions of legitimate strikes in different ways. Second, American and French citizens perceive certain patterns of drone warfare as more legitimate than others. Finally, this in-group and out-group effect reflects unique assumptions that underline perceptions of legitimacy. Together, these findings suggest that U.S. counterterrorism strikes no longer explain how most countries use drones and the public’s perceptions of legitimate strikes result from why and how drones are used. This has important implications for how countries choose to employ drones going forward.

The globalization of drone warfare

Countries can use drones tactically, which is to say on the battlefield, or as part of a strategy designed to achieve broader military and political objectives. So, for example, similar to a patrol or raid, commanders can use drones tactically during engagements with an enemy to achieve limited military objectives, such as defending ground forces. Political officials can also use drones strategically to meet larger political and military objectives. The U.S. used drones strategically to “decapitate” al-Qaida in Pakistan.

Countries can also use strikes with different constraints to prevent consequences, namely civilian casualties. Unilateral constraints are imposed by officials within a single country. In May 2013, President Barack Obama adopted a “near” certainty standard of no civilian casualties during U.S. strikes in Pakistan. Multilateral constraints obligate states to meet the oversight requirements of other countries. A well-known multilateral constraint is United Nations (U.N.) approval for strikes. In a recent study, we show that such approval is associated with higher public support and perceived legitimacy for a strike, which is cross-nationally consistent in France and the U.S.

How do these patterns of drone warfare shape the public’s perceptions of what it deems a legitimate use of force, and why should we care? Legitimacy is important because it reflects the public’s perceptions of rightful conduct. Research shows that the public does not challenge such legitimate actions, which preserves officials’ political capital. This helps explain why American officials often characterize U.S. strikes as “legitimate” and “righteous,” even when they kill civilians.

To address how the publics of different countries interpret the legitimacy of varying patterns of drone strikes, we conducted a survey experiment in France (909) and the U.S. (914). We randomly assigned over 1,800 respondents to eight treatment groups and a control group. The treatment groups varied a fictional country’s drone strike in terms of use (tactical or strategic), constraint (unilateral or multilateral), and civilian casualty (yes or no). We asked respondents to rate the legitimacy of the strike on a scale of 1 (low) to 10 (high).

Our analysis resulted in several findings. First, Americans and French citizens perceive different patterns of drone warfare as more or less legitimate. Americans perceive the strategic use of a strike as most legitimate and the type of constraint is conditioned by a civilian casualty. Americans’ perceptions of legitimacy are consistent when a strike is used with unilateral or multilateral constraint and does not kill a civilian. When a strike does kill a civilian, however, Americans’ perceptions of legitimacy are shaped by multilateralism. French respondents do not differentiate between constraints in this way. French respondents’ perceptions of legitimacy are strongest when a strike is used tactically and with multilateral constraint, invariant of a civilian casualty. Together, these results imply that whereas American and French respondents may prefer distinct patterns of drone warfare adopted by their countries, Americans also prefer the cover of multilateralism when mistakes are made.

To explore what assumptions may underline respondents’ perceptions of legitimacy, we used causal mediation analysis that generated a third finding. Some scholars think that emotions, such as anger or fear, influence American and French preferences for strikes. The results are mixed when testing this hypothesis, however. Rather, we tested beliefs drawn from the literature on war and multilateralism. Our analysis indicates that French respondents’ perceptions for legitimate strikes are explained by several core beliefs. About 20% of French citizens’ perceptions of legitimacy reflect a belief that military force has a role to play in international affairs. Another 7.5% reflects French citizens’ belief in the responsibility of great powers for global security. Sensitivity to civilian casualties also constitutes nearly 7.5% of French respondents’ perceptions for legitimate drone strikes. Americans, meanwhile, emphasize international law. This is surprising because U.S. strikes, almost by definition, breach sovereignty. Yet Americans may interpret drones as a way to uphold international law, though some scholars think this is dubious.

The future of drone warfare

These findings have implications for French and U.S. strikes while also providing insights for countries’ evolving use of drones. First, despite or because of drones’ precision, public perceptions for legitimate strikes—especially among Americans—are heavily conditioned by civilian casualties. This suggests that officials should take every precaution to prevent civilian casualties during strikes, which they can do by integrating unilateral and multilateral constraints. The Biden administration can enhance the perceived legitimacy of U.S. strikes by augmenting secretive negotiations with officials from intervened countries with international approval. On the heels of his recent re-election, President Emmanuel Macron can adopt a near certainty standard of no civilian casualties during French strikes to protect against mistakes, which often happen in war. The U.N. found that a French strike in Mali in January 2021, for instance, killed 19 civilians.

Second, the proliferating use of drones during conflicts, such as in Libya and Ukraine, suggests that the future of drone warfare may look different from either French or U.S. counterterrorism strikes. Governments’ use of drones to respond to political violence within their countries may not raise the same international legal concerns that cross-border strikes do. At the same time, these strikes may be perceived as less legitimate because they lack multilateral oversight. This tension suggests that the global governance challenge for drones is not entirely with U.S., or even French, counterterrorism strikes. Rather, it increasingly relates to countries’ use of drones during intrastate conflicts and border disputes, such as that between Armenia and Azerbaijan. While scholars have scrutinized the legality and legitimacy of French and U.S. counterterrorism strikes, they should shift focus to other uses of drones that have, until now, largely flown under the radar.

The views expressed in this article are those of the authors and do not reflect the official policy or position of the United States Department of the Army, Department of Defense, or Government.

Perspectives on the future of the global order

Perspectives on the future of the global order

The case for participatory democracy during educational crisis

How did COVID-19 affect Americans’ well-being and mental health?