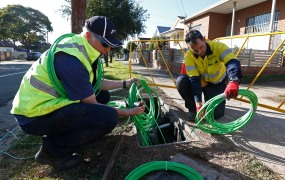 Chairman Hickenlooper, Ranking Member Braun, and distinguished members of the Health, Education, Labor & Pensions Subcommittee on Employment and Workplace Safety, thank you for the invitation to testify on the important issue of how the Infrastructure Investment and Jobs Act (IIJA) can sustainably and equitably create new, high-paying jobs in emerging industries, particularly from those created by major investments to expand universal broadband access. I am Nicol Turner Lee, senior fellow, Governance Studies and director of the Center for Technology Innovation at the Brookings Institution.

With a history of over 100 years, Brookings is committed to evidence-based, nonpartisan research in a range of focus areas. My research expertise encompasses data collection and analysis around regulatory and legislative policies that govern telecommunications and high-tech industries, along with the impacts of digital exclusion, artificial intelligence, and machine-learning algorithms on vulnerable populations. My forthcoming book, “Digitally invisible: How the internet is creating the new underclass” will be published by Brookings Press later this year.

The IIJA is a historic, bipartisan step to ensure that every American is equipped with the necessary tools, resources, and structures to participate in a 21st-century economy.1,2 The legislation includes high-speed broadband as one of the many critical infrastructure assets, which is both significant and transformative as getting online has become more of a necessity, instead of a luxury in these times.3 Having high-speed broadband access is fundamental for Americans to work, study, participate in religious or cultural activities, and socialize, in parallel with more traditional infrastructure. In other words, it is a pathway to first-class, digital citizenship. If the IIJA is executed properly, the nation should be able to accelerate internet access for the millions of Americans who currently live without it. In turn, it will spur massive economic growth—granting access to millions of new 21st century jobs, as well as creating new career paths for livable earnings within industries enabled by direct access to more robust networks, in addition to industries indirectly benefitting from existing and emerging platforms. In my written testimony, I propose solutions on how we can embolden an equitable and expansive workforce in the broadband sector of the U.S. economy. But first, Congress must implore the Department of Labor (DOL) to create taxonomies of the skills needed to fill vacancies in this and related technology sectors. Currently, there exists ambiguity in how we identify and define such opportunities, including fiber optics, 5G or wireless, and other related broadband infrastructure opportunities. Further, the United States must engage in national skilling through the creation of policies and norms that engage workers in not just job opportunities, but career paths, especially for those individuals without four-year college degrees.4 These milestones can be attained via lucrative training and placement opportunities, including apprenticeships and industry credentialling in the existing and emerging careers in wireline and wireless broadband, as well as supportive industry roles in data analyses, customer service, cloudware, and more.

More important, federal and state governments must consider empowering the broadband workforce as a critical element of the IIJA, starting with the enlistment of education and community partners like community colleges, and K-12 schools who are critical to fueling the 21st-century workforce. Congress might also support funding to the Corporation for National and Community Service for a national Digital Service Corps, where several under-skilled workers can engage in more experiential learning of these trades while receiving a modest stipend as part of their pathway into jobs, and then long-term careers.

My main point of my testimony is that the nation has a huge opportunity in the creation of new, high-paying jobs to build critical infrastructure like broadband access. These efforts should be an accelerant for entry and involve deliberate and strategic efforts around equity, ensuring that no citizens are excluded based on their demographic background, geographic residence, or lack of competency in fairly nascent fields.

Continue reading the full testimony here. Watch the full video of Turner Lee’s testimony (starting around the 47:25 mark) and the rest of the hearing.