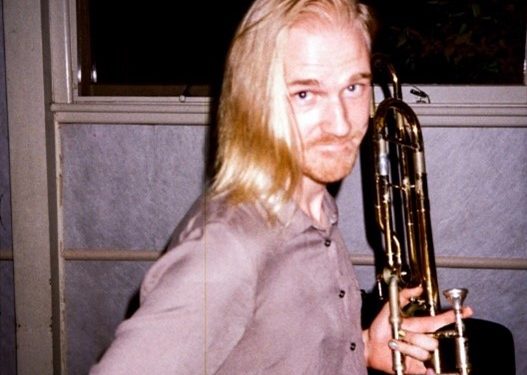 We are delighted to announce that the winner of the Haldane Prize 2021 for early career researchers has been awarded to Max Mallen-Cooper. Check out their story behind the award winning paper below and read all the shortlisted papers here.

Winner of the Haldane Prize 2021, Max Mallen-Cooper from the University of New South Wales discusses their latest research: Tissue chemistry of biocrust species along an aridity gradient and comparison to vascular plant leaves, where they assess the extent to which tiny plants like mosses and lichens are equivalent to a tree’s leaves.

As a trombone player with a penchant for terrible metaphors, I often think of an ecosystem function as the sound of an orchestra. Imagine all the instruments are species contributing to some ecosystem function such as carbon fixation, where carbon dioxide is converted to sugar-based energy via photosynthesis. There is variation in sound (i.e., carbon fixation) at all levels, from sections to instruments to individual players. Some instruments contribute more volume to the overall sound than other instruments.

Any collection of lichens, mosses, liverworts, hornworts, and microbes that live on the soil surface can be considered a biocrust, although some researchers prefer a narrower definition. Most of these organisms (lichens, bryophytes, and cyanobacteria) photosynthesise like their larger vascular plant cousins, and several are able to fix nitrogen.

People who have not lived or ventured beyond mesic environments might not appreciate the vast extent of biocrusts in drylands. In wet parts of the world, soil-dwelling mosses and lichens are usually restricted to small disturbances, tiny gaps in the leaf litter, and places where vascular plants struggle to grow (e.g., soils with very high drainage). Yet, in drylands, which occupy almost half the world’s land area, biocrusts can completely cover the soil surface.

A thriving community of soil-dwelling mosses, liverworts and lichens known as a ‘biocrust’ (Credit: Max Mallen-Cooper)

An important piece of background information to this study is that trees and shrubs can support multiple layers of leaves. In the tropics, there are trees that have over 7 complete ‘layers’ of leaves (i.e., Leaf Area Index > 7); this means that if you stripped all the leaves off one of these trees, you could cover an area 7 times larger than the canopy area. However, in less productive ecosystems, like drylands, plants often cannot support even one full layer of leaves, meaning that if you looked at them from above, you would be able to see patches of ground. In global models of carbon fixation and other nutrient cycles, the number of leaf layers (Leaf Area Index) is a key variable, and, critically, it does not include biocrusts.

The main thrust of the paper actually came from a spontaneous casual conversation. It went something like this…

Max [callously preventing Will from walking past their desk to get a cup of tea]: Hey Will, have a look at the results from the nutrient analyses. This is nitrogen across biocrust species.

Will [a vascular glint in his eye]: Hmm… So lichens are basically leaves with no stomata and super long lifespan, right?

Will: Maybe we could compare the nutrients to leaves from AusTraits? Anyway, I was just trying to get my tea…

There are two key messages from our article:

1) Biocrusts were chemically equivalent to leaves, and therefore could be considered as an extra layer of leaves stretched across the soil surface.

2) Within biocrust species, carbon content declined in increasingly dry environments. Given that many parts of the world are becoming drier due to climate change, this finding suggests that biocrusts in these areas will fix less and less carbon over time. Eventually, biocrust species will die off at the arid limit of their range when conditions become too dry to produce enough carbon to balance out their metabolic needs.

A major part of our labwork involved crushing lichens and bryophytes. We tried a variety of crushing methods: shaking a steel ball within a test tube, grinding with a mortar and pestle, and even snap-freezing with liquid nitrogen (sadly unsuccessful). Yet some lichens, especially those in the Xanthoparmelia genus, were almost uncrushable! We were on the cusp of giving up, but eventually found that 20-30 minutes of solid grinding with the pestle was sufficient.

Different ways of crushing lichens and bryophytes in the lab (Credit: Max Mallen-Cooper)

I’m currently in the final stages of writing up a PhD on species range limits in biocrusts and how they might be affected by global change. Will (second author) is one of my supervisors.

My parents are both ecologists and insidiously raised me with a curiosity for natural phenomena. It would start with small things like pointing out invertebrate fauna in rockpools or cicadas on trees. In school year 4 (age 9), my first poster presentation was about the ecology of the mountain pygmy possum. All too soon my parents and I were discussing flowering phenology using full botanical names.

Much of my spare time is spent playing trombone and composing music, mostly in a brass band called Hot Potato Band. After recently acquiring a looping pedal that allows me to accompany myself, I have threatened to replace the entire band with pre-recorded trombone versions of me. I have also spent the last 3 years attempting to create the ultimate choc chip biscuit. Every time I bake, I slightly vary an ingredient ratio or a baking condition to test its impact on biscuit quality. A key finding from this study is that forgetting the chocolate leads to crushing disappointment among tasters.

How does it feel to win the 2021 Haldane Prize?

I feel incredibly honoured to have won the prize, and it has given me a new sense of confidence in my writing. I also recognise my immense privilege in being a white third-generation scientist and will be donating the prize money to Deadly Science, who provide science resources to remote schools around Australia.

What are you working on next?

At the moment I’m working on a really exciting resurvey project. I found an old lichen survey from 1970 and I’m revisiting all the sites 50 years later to see if any lichen range boundaries have shifted over time as the climate has become hotter. Stay tuned for more updates! The best place to follow my research is on twitter @maxmallencooper.

Are EUAs Deregulation or Regulatory Capture?

Are EUAs Deregulation or Regulatory Capture?

What’s causing inflation in the U.S. and how we can get out of it