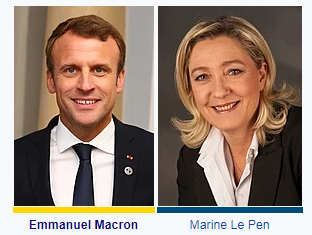 Of course, Macron won amid allegations of vote tampering. If a ballot was torn in any way, which seems to have been those of Le Pen, they were just discarded. There was NO POSSIBLE WAY that the EU would have allowed Le Pen to win for she would have upset the EU and gone against this madness of creating a war with Russia to cover up the collapse in the monetary system thanks to 8+ years of negative interest rates.

The Die is Cast. Europe is headed into self-destruction. Meanwhile, the UK press is looking at putting on sanctions against Germany because they are still relying on Russian gas. We have the most braindead crop of world leaders in human history. Not a single one will bother to understand how world peace is actually accomplished.

While Rome conquered the known world, they quickly saw the benefits of being part of the Roman Empire – free trade! The conquered lands all began to sell local products to Rome and Romans were quick to invest in the newly conquered regions. It was economics that made Rome great. That is precisely what is being torn apart here dividing the world and in the process raising the threat of war.

This coin of Augustus (27BC-14AD) shows a conquered barbarian handing a child representing their nation to Augustus symbolizing their subservient posture to the Roman Empire. Cutting off Russia and hinting about sanctions against China and now against Germany for buying Russian energy is the precise way to create a world war. When there is no benefit in working together, then there is no reason for peaceful relations.

NEVER in my life have I ever witnessed such stupidity among world leaders. And just for the record, Putin is by far the ONLY rational leader. Those behind him think he has been too “SOFT” on Ukraine and he should have nuked Kyiv and then pound his chest asking who is next? There are those who would not hesitate to win for they already view this as a war with NATO and the United States using Ukrainians to try to weaken Russia for the kill. Hillary has even said so much.

The Dnieper River was the border of Ukraine as well as Belarus. It never included the east that was always Russia going back to the Russian Empire. Merely because the USSR assigned that region to Kyiv for administration did not transform ethnic Russians into Ukrainians. Naturally, some people just want to blame Russia and say they invaded without any discussion of the antics of the West or Zelensky which have deliberately provoked this war. The financial system was collapsing thanks to negative interest rates that have wiped out the European bond markets. They NEED this war to hide their decades of fiscal mismanagement.

This is a war simply intended to defeat Russia. Zelensky not only was elected under false pretenses promising peace and the end of corruption, but he has even waged war on the Russian religion like Henry VIII trying to seize all churches and eliminate Moscow and the Patriarch appointing all authority to Ukraine.

For this, those writing the scripts for Biden to deliver have destroyed the world economy and reversed all the world peace efforts since Kennedy and Nixon’s effort to divide China and Russia. All for what exactly? Climate Change or the real issue – the collapse of Keynesian Economics?

It is a shame that far too many Ukrainians are being used as pawns in this war. The more killed, the better. When the history of this period is written, we will see that the media has been creating this war just as they created the Spanish American War. The father of yellow journalism, Joseph Pulitzer (1847-1911), made his fortune by creating a fake war to sell more newspapers.

Perhaps the press is desperate for the same motive. CNN+ was a disaster and is being shut down. They had less viewership than even this blog. Perhaps CNN desperately needs war with blood in the streets to regain their viewership from the days of the Gulf War?

Pulitzer made his money by spilling the blood and guts of young Americans. Perhaps he felt guilty and left his estate to create the Pulitzer Prize for honest journalism – what a joke,

I was on the water over the weekend and the number of houses flying the Ukrainian flag warns that there will be support for World War III for these people have no clue that they have been manipulated into a position to support the real agenda.