Does Zuckerberg Belong in Prison? 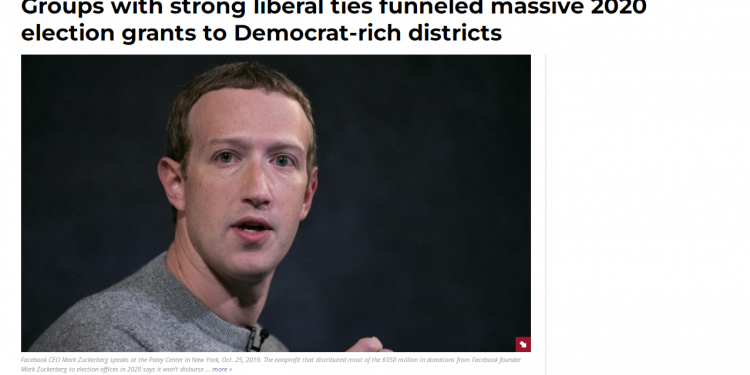 We cannot even donate $10,000 to a political candidate, but if you are Mark Zuckerberg, you can help to manipulate elections. He was able to prevent the break up of his company by pouring hundreds of millions into the election and then blamed Russia for buying advertisements on Facebook during the 2016 election. Mark Zuckerberg dumped more than $400 million into manipulating the 2020 presidential election where the money was typically funneled by Democratic operatives. These were often areas where there was voter canvassing in the get-out-the-vote effort for Biden.

The deep concern here is that the DOJ will NOT investigate Zuckerberg but when the Republicans get back in, Zuckerberg could find himself in prison for interfering in the election where the districts targeted were far too often voting in excess of the normal trend. It has been acknowledged already that private funds were distributed on a truly historical level. I, for one, will NEVER advertise anything on Facebook.

When a public company allows itself to be a political activist, which ONLY reflects the decisions of the board, as Disney is doing in its feud with Florida, then this is an abuse of its fiduciary duty to shareholders when the company is being usurped for personal political agendas. Another one is Salesforce pushing Schwab’s Great Reset.

These companies are violating the very principle of shareholder investment. If I went public and then used company money and policy for a personal objective or gain, that is considered fraud. Merely the fact that such an objective is politics makes no difference – it is using corporate funds for personal gain.

The post Does Zuckerberg Belong in Prison? first appeared on Armstrong Economics.

Raising the standard: Time for a higher poverty line in India

For Taiwan, reading the moment is essential