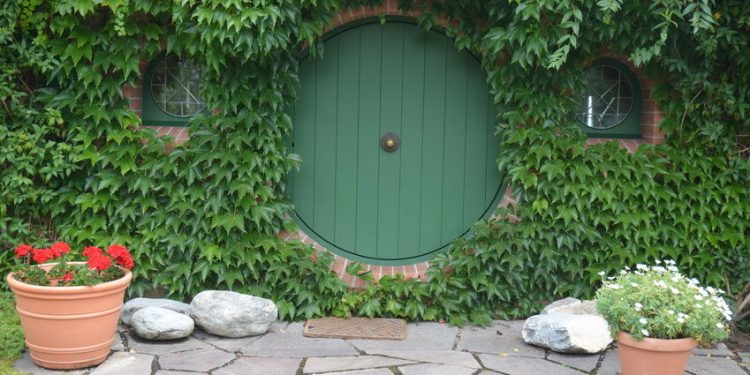 “In a hole in the ground there lived a hobbit. Not a nasty, dirty, wet hole, filled with the ends of worms and an oozy smell, nor yet a dry, bare, sandy hole with nothing in it to sit down on or to eat: it was a hobbit­hole, and that means comfort.” – The Hobbit

Tolkien wrote one of the most recognisable opening sentences in English literature. By focusing on such a mundane image of where his heroes lived, he quickly establish that Hobbits were literally ‘down to earth’ sorts of people. Tolkien also recognised the huge importance of explaining the basic habitat and niche of his species. Tolkien went on to describe these hobbit holes in more detail.

Not a nasty, dirty, wet hole…. Image from Mariana Vargas.

“It had a perfectly round door like a porthole… The door opened on to a tube­shaped hall like a tunnel: a very comfortable tunnel … The tunnel wound on and on, going fairly but not quite straight into the side of the hill …­ ­ and many little round doors opened out of it, first on one side and then on another.” – The Hobbit

Somehow, Tolkien made a burrow sound like a great place to live. Many things live in burrows, cute things like moles, badgers, and rabbits; not so cute things like ants, bees and spiders. Tolkien had a problem with spiders. Arachnids crop up in the his Middle-Earth stories as a cypher for wrongness in an area. Giant spiders in Mirkwood, Shelob in the Mountains of Mordor, Ungoliant in Beleriand. It’s ironic, then, that hobbitholes describe the homes of a certain type of arachnid very well, the trapdoor spiders. These wonderful, chunky, and often large spiders make their living by constructing holes in the ground, building a round door over the entrance and waiting. If a juicy beetle happens to wander past then out leaps the spider, which grabs the prey, and then drags said beetle back into its home for tea…

Female trapdoor spiders tend to stay close to where they were born, while males head off elsewhere to seek their fortune. This results in colonies of closely related trapdoor spiders and their burrows due to all of the cousins, aunts, mothers and daughters living there. For unsuspecting prey these areas are a bit like minefields to move through.

In New Zealand there is the trapdoor spider group Cantuaria. There are many species in this genus distributed across the southern two thirds of the the main islands. Some are known as specific species but many are only hinted at through genetic analyses. Vikki Smith spent her PhD at Lincoln University trying to understand a lot more about these trapdoor spiders.

“The Harfoots … long lived in the foothills of the mountains … They were the most inclined to settle in one place, and longest preserved their ancestral habit of living in tunnels and holes.” – TFotR

As these spiders tend to be relatively sedentary, staying in the same place, they would seem to be at risk from human modification to the landscape. Vikki looked at how these spiders selected sites to build their burrows. Given that they make long-term and complex burrows, Vikki reasoned that the soil conditions might be of real importance in selecting where to build. It might be too, that the different species of Cantuaria have different requirements or are able to adapt to and tolerate different habitats.

“All Hobbits had originally lived in holes in the ground, or so they believed, and in such dwellings they still felt most at home; but in the course of time they had been obliged to adopt other forms of abode … But suitable sites for these large and ramifying tunnels (or smials as they called them) were not everywhere to be found; and in the flats and the low-lying districts the Hobbits, as they multiplied, began to build above ground.” – TFotR

Vikki located trapdoor spider burrows across the range of Cantuaria. She measured a range of variables at these colonies that might be important for this hobbit-spiders (soil type, soil moisture, soil pH, rainfall, elevation, latitude, local impact of humans). In a paper published in Austral Ecology with Cor Vink, Adrian Paterson, Rob Cruickshank and Emily Fountain, Vikki found that most of these things did not make much of a difference to the trapdoor spiders.

Cantuaria burrow entrances – cozy colony of relatives for some; dangerous place of death and dismemberment for others! Image from Vikki Smith.

Humans impacts in an area (roads, farming, infrastructure) did not seem to addict distribution. Soil type and other site attributes played a small role, altitude limited their distributions to less than 750 m above sea level. The only factor that seemed to be of real importance was rainfall. Cantuaria colonies were not found in areas of rainfall in excess of 3000 mm/year and seem to be most common in areas with around 1000 mm/year.

So, like hobbits, trapdoor spiders can adapt to local conditions. Those Cantuaria found in very wet areas even have burrows without a trapdoor, perhaps to make the holes less humid. The spiders prefer areas with regular but not excessive rainfall. All very Shire-like! I can see Cantuaria expectations of what makes a great place to live being very similar to that of hobbits. This matches one of my favourite Tolkien quotes.

“Altogether 1420 in the Shire was a marvellous year. Not only was there wonderful sunshine and delicious rain, in due times and perfect measure, but there seemed something more: an air of richness and growth, and a gleam of a beauty beyond that of mortal summers that flicker and pass upon this Middle-earth. All the children born or begotten in that year, and there were many, were fair to see and strong, and most of them had a rich golden hair that had before been rare among hobbits. The fruit was so plentiful that young hobbits very nearly bathed in strawberries and cream; and later they sat on the lawns under the plum-trees and ate, until they had made piles of stones like small pyramids or the heaped skulls of a conqueror, and then they moved on. And no one was ill, and everyone was pleased. Except those who had to mow the grass.” The Return of the King

I’m not sure that Tolkien would have approved, but I do know where I would go to search for trapdoor spiders if I was able to visit Middle-Earth!

African governments are turning to cryptocurrencies but can they team up?

Democrats are the Enemy of the Middle Class