Combatting America’s crisis of despair by investing in brains 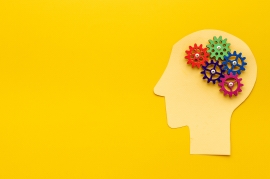 By Harris A. Eyre, Carol Graham

Brain challenges are jeopardizing our communities. These range from mental health to neurological and substance abuse disorders, loneliness, and now long COVID-19. They result in economic hardship and are exacerbated by technology and ongoing global health crises. For example, social media platforms are driving significant increases in anxiety rates among teenagers. For others, social media is having a brain “hijacking” effect. This means phones, apps, and social media, specifically designed to maximize your time using these systems by provoking mostly negative emotions, are fueling misinformation and disinformation spread. Misinformation and disinformation result in conspiracy theories, radicalization, and national security risks.

We cannot begin to solve some of our greatest societal issues—homelessness, incarceration, deaths of despair—without focusing on care for people with brain health disorders. Deaths of despair—such as suicide, drug overdose, and alcohol poisoning, often but not always stemming from economic hardship—are higher among those without a college degree. For too many schoolchildren—especially the disadvantaged, younger students, and girls—the price of the pandemic and resulting remote learning could be a lifetime of opportunity lost. In addition, science denialism, which is rooted in how the brain processes information, is fueling COVID-19 vaccine rejection that limits our ability to end the pandemic.

These issues challenge our individual and collective economic productivity, and they lower our collective brain performance. If these brain challenges are not managed definitively, many societies will have a hard time sustaining themselves economically and socially in a cognitive skills-driven economy also known as “brain economy” that is evolving faster than we can keep up. Our brains are under siege.

Our current approaches to dealing with these issues are siloed and insufficient. Because these issues cut across academic disciplines, policy areas, and sectors of government, they typically fall through the cracks. We need a grand strategy. The time is now, given that the COVID-19 pandemic-induced rapid changes in our governance and operations as a country, and new developments in our expertise in conducting and financing large-scale science and innovation (such as new vaccines via Operation Warp Speed).

We have developed a new, conceptual asset, Brain Capital, which incorporates brain health and brain skills in the brain economy. We believe Brain Capital can inform better policy development and public-private partnerships. With colleagues at the Organisation for Economic Co-Operation and Development’s (OECD) New Approaches to Economic Challenges Unit (NAEC), we have determined that Brain Capital drives economic empowerment, brain performance, social resilience, and emotional connection.

As brains are indispensable drivers of human progress, Brain Capital provides an opportunity to invest in these valuable assets and nurture healthier, more resilient, and flexible brains. Yet like many other important things which are critical but not captured by standard economic indicators, such as societal well-being, Brain Capital is not captured by any existing measure of gross domestic product (GDP).

The White House needs a Brain Capital Council. This Council would take a whole-of-country approach, integrating the federal government with communities at all levels, engaging partners across the spectrum from small- and medium-sized enterprises (SMEs) to patient and caregiver groups, educators, health care workers, and beyond. This Brain Capital Council would harmonize with existing task forces, councils, and advisory groups with overlapping remits as to not duplicate but rather bolster all efforts related to the building of Brain Capital.

In a new policy brief co-authored with a dozen esteemed neuroscientists, medical doctors, economists, policy strategists, and academics, we drew direct connections between 11 current White House Councils and the concept of Brain Capital. Such a Council would be staffed by cabinet executives, private sector experts, and top academics from a variety of disciplines, ranging from neuroscience to economics to psychology, and could develop and enact a grand strategy.

By placing our brains—our most worthwhile asset—at the center of our policymaking, we will be able to increase people’s productivity as well as their well-being. This strategy could build our brains back better. Additionally, a brain science-inspired statecraft would help us navigate the unknowns and unpredictable changes to thrive in the 21st century with greater agility and spur new industries in brain technology.

Vaccination in nursing homes not all about politics: An update

The challenge of addressing the health care needs of Afghan evacuees

The challenge of addressing the health care needs of Afghan evacuees

Prediction machines, insurance, and protection: An alternative perspective on AI’s role in production

Did Harris Set Off the Russian Invasion Telling Ukraine to Join Nato?