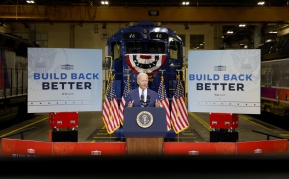 When Sen. Joe Manchin (D-W.Va.) withdrew support for President Biden’s signature Build Back Better legislation, he not only killed hopes for its passage and in spite of his legislative victory on the infrastructure bill, he made the president look like he couldn’t cut a deal. The White House was furious, Manchin’s fellow Democratic senators were furious, and the centrist House members who went out on a limb to vote for it were furious. It capped off a bad few months for Biden, a period that began with the Afghanistan withdrawal and ended with a resurgence of the COVID-19 virus. Everyone is expecting the new year to be a tough one for Biden and the Democrats.

But it doesn’t have to be. One of the ironies of the Biden presidency is that he keeps getting bad marks for popular policies. Most Americans wanted out of Afghanistan and a majority supported the items in the Build Back Better bill, and yet, Biden is getting slammed. The way out is to change strategy. Stop putting everything into these enormous bills on the grounds that “reconciliation” is the only way to get past the Republicans in Congress, and start doing things the old-fashioned way, one bill at a time. There are two advantages to this approach. Some of the very popular provisions just might, if they were standalone bills, attract enough Republican votes to become law. And if not, Republicans would be forced to vote, on the record, against some very popular ideas and face Democratic criticism in the midterms.

There are many ways to break down the massive bill into discrete and popular parts that would make it harder for the president’s opponents to message an attack. For instance, Biden could send a free-standing bill to Congress focused solely on making the increase in the child tax credit (passed in March as a part of the COVID relief bill) permanent. This is one of the most popular features of the bill, and research has shown that it has had a dramatic impact on child poverty rates. As a stand-alone bill, the messaging is clear and easy. There’s a slim chance that Democrats would win a few Republican senators but there’s a big chance that they could do some political damage to the Republicans who would vote against it. Either way, something is better than nothing.

Or, Biden could send Congress a free-standing bill providing four weeks of paid family and medical leave. With workers struggling to take care of family members as COVID and long COVID crash through the population, this proposal would be increasingly popular as the effects of the virus wear on. Once again, there’s a chance (albeit a slim one) that a standalone bill could muster enough Republican votes. And for the Republican senators who don’t vote for it? Well… the opposition ads write themselves.

This is the case for other parts of the massive bill as well. Take the health care provisions. One of the most popular provisions, expanding Medicare to include hearing aids, has a broad base and is easy to understand. The baby boom generation isn’t dead yet but too many rock concerts have made it hard of hearing. It could be tough for a Republican senator to vote against this, but it won’t be tough for Democrats to slam them for denying grandpa hearing aids.

There are many provisions in the bill geared toward combatting climate change. But one of the simplest is a provision to raise the rebates by $5000 for the purchase of electric vehicles. Electric cars started out as luxury items. But today you can get a Tesla Model 3 for $41, 190, which is a few thousand dollars less than the average price of a new car ($45,031). With Ford and other companies getting into the electric vehicle market, it is no longer a market for the well-off; add to that a $12,500 rebate and lots of folks who equated doing good for the climate with economic pain may start to think differently.

Of course, there are pieces of the bill that are not clear winners with the public. One piece deals with immigration and protects nearly 65% of undocumented immigrants from deportation for as long as a decade. The battle lines on this would be pretty clearly drawn between red-state senators and blue-state senators. Likewise, the provision to raise the cap on deductions of state and local taxes from the current cap of $10,000 to $80,000 would probably not be very popular at all given that a few high-income, high cost of living states (California, New York, New Jersey, and Illinois) would get 50% of the benefits. And, as my colleagues Bill Galston and Richard Reeves have written, the SALT proposal would benefit those who need it least, a colossal example of bad policy and bad politics.

Nonetheless, there are plenty of popular items in this bill – but too many different policy proposals made it impossible to message. For months now we’ve watched Democrats take a very deep breath before spewing out the laundry list of items in the bill. Biden can still have a win – in fact, he can have a series of wins – if he moves away from massive bills that contain everything but the kitchen sink and toward bills that are clear and easy to understand.  Social Security, perhaps the most popular program ever created, was enacted by President Roosevelt and the Democratic Congress in a 32-page bill.

Maybe there’s something to that?

Who earned PhDs in economics in 2020?

Al Gore and the Dangers of Censoring ‘Misinformation’

Why is AI adoption in health care lagging?