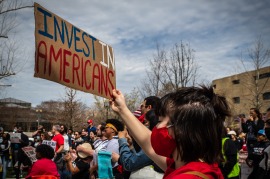 After President Biden announced his administration’s plan for student debt relief, Andre Perry explains the impact loan forgiveness will have on student debt holders, the role of student debt in racial wealth and income inequality, and how to keep higher education attainable for the public.

Listen to Brookings podcasts here, on Apple or Google podcasts or on Spotify, send email feedback to podcasts@brookings.edu.

Thanks to audio editor Colin Cruickshank.

PITA: On Wednesday, the White House announced a package of debt relief for student loans, as well as reforms to the federal student loan system for future students. The plan will cancel up to $10,000 – or $20,000 for Pell Grant recipients – for individuals making less than $125,000 a year.

Andre Perry, senior fellow at Brookings Metro, and author of “Know Your Price: Valuing Black Lives and Property in America’s Black Cities,” is here to talk to us today about the president’s debt cancellation plan, including the impact this may have for Black student borrowers and racial disparities in wealth and income. Andre, thanks so much for talking to us again.

PERRY: Hey, thanks for having me, Adrianna.

PITA: I wanted to ask you to start with sort of a big picture look at things. What is the role that student debt plays in racial wealth inequality writ large?

PERRY: Well, we know that white families have about eight times the amount of wealth as Black families, and that really comes out of the wash in terms of who repays student loans, what kind of time period, as well as default rates. And we know that Black borrowers take much longer time to cancel or to eliminate their loans, to pay down their loans, and also their default rates are higher. My colleague Carl Romer and I wrote a piece, a Brookings-published piece entitled, “Student debt cancellation should consider wealth, not income” some months back, or actually in 2021, to show how wealth inequality should be considered when creating some type of cancellation plan.

And so in a very clear way, people with low wealth – Black people are more likely to be in that category – are negatively impacted by a student loan program that has had to deal with tuition increases of threefold in a matter of thirty years. And so because of that, Black people have to borrow more money. And it’s really debilitating in terms of their income-debt ratio, making it more difficult to purchase homes. Their job choices are shifted because people are considering whether or not they can take back their loans based upon that employment. And let’s not forget wage discrimination and employment discrimination still exist. So, this proposal by Biden couldn’t come soon enough for many families, but it doesn’t necessarily deal with wealth inequality. It has an income cap. When you don’t address wealth and only use income, you’re essentially turning a blind eye to past discrimination.

PITA: Let’s talk about the amount of the cancellation. What sort of dent will this $10-20,000 put in that picture of the student debt load?

PERRY: Well, you know, the plan will cancel up to twenty thousand of student debt for Pell Grant recipients for loans held by the Department of Ed, and ten thousand for non-Pell Grant recipients. Pell Grant eligibility is determined by need, which is determined by the FAFSA form that families fill out when they are applying to college. But there is an income limit: 125,000. It only applies for individuals who earn 125,000 or less, and 250,000 for married couples.

From our perspective, from our research, that level of cancellation will have negligible impact on the racial wealth gap. We encourage a greater amount. So the 125,000 threshold and 20 to 10,000 in debt cancellation will not address many of the middle-income families who also have significant amounts of debt. However, because most loans that are taken are under 20,000, it will significantly help well over a third of loan recipients. And because Black people are twice as likely to be Pell-eligible it will certainly impact those families and the institutions with high concentration of Black people. So HBCUs, for instance, will certainly benefit. And I forgot to mention the Parent PLUS loan is also included in this debt relief. And those are federal loans that go to parents and/or guardians, so it will also help Black families in that regard.

But in general this plan really helps low-income people across the board. But for my wishes, I hope that they would create a plan that would more address the racial wealth divide, which is one of the reasons why Black people have to take on more debt. But even if full debt cancellation, you’re talking about closing the racial wealth divide by three, five, six percent in some models, which is still, it’s a small amount, but we have to chip away at that wealth gap in order to really say that we have a level playing field.

PITA: I did want to ask you about that, about the Pell Grant as a tactic to try and target racial inequities in particular. You know, whether Biden didn’t want to or felt he couldn’t cancel just larger blanket amounts of student debt, tell us some more about the Pell Grant as a targeting method. Is that going to be particularly effective? It sounds like yes, or would there be some other methods that you would have liked to see him try to pick out or to try to do in future?

PERRY: You know, policymakers are always trying to find workarounds for race, and using the Pell Grant is a form of a workaround. Certainly as I mentioned, Black people are twice as likely to be Pell-eligible, so it’s going to have disproportionate benefits for Black people in that regard. So I think it’s a good workaround, but it’s a workaround nonetheless. Again, there are lots of middle- and upper middle-income families who have more debt. $125,000 is not the same for all families. And so if you are making 130, 140, and you’re Black, it is a good possibility you went to college for many years, it’s a good possibility that you’ve taken on large amounts of debt and you will have less discretionary income than families who don’t have to take on loans, and those people who have $125,000. And just to put the exclamation point on that, the Fed Reserve did a study where they showed that white graduates, on average, expected intergenerational wealth transfer, whereas black graduates are expected to contribute to their families once they graduate. So there are much different realities in and because we don’t attend to wealth, we don’t means-test wealth, but we should consider it when creating these plans, because if you did, it would probably increase the income threshold and cancellation amount.

PITA: Beyond the cancellation of the existing student debt up to the $10,000 or $20,000, there were also some more forward-looking proposals in the president’s plan, including changes to the income-driven repayment plans for repaying some federal loans. You had previously published some research that was critical of the existing income-driven repayment models. What did you think about this new proposal and what kind of impact it’ll have?

PERRY: Well, again, this is something I also think is a good first step, but I don’t think it goes far enough. You know, income-based repayment plans were very complex, poorly managed, there were predatory practices on the part of the loan servicers. And these plans essentially have borrowers pay what was then ten percent of their income for their loans. But interest would accrue over time, and so many Black borrowers, because of wage stagnation, wage discrimination, would pay that ten percent, but  they would still see their interest balloon over time. But what Biden’s plan does is lower the amount borrowers have to pay from ten percent to five, and also it forgives loan balances after 10 years, as opposed to 20 to 25 prior to this plan. So that’s, I think, a positive change. But what about that interest? I’m sure that legislators will introduce policies to extinguish that interest over time, so we will see. But I think that the steps in income-driven plans is a good step but we can go a little bit farther.

PITA: You mentioned at the beginning a nearly threefold increase in the cost of tuition over the last three decades, and I just wanted to fill it out with some additional numbers from the Pew Research Center. They had looked at a twenty-year span from ‘93 to 2012, and that the share of students taking out loans rose from roughly half of students to 69 percent of students needing to take out loans, and then the amount of those loans grew from roughly $12000 to $26000, and they passed more than $30000 in 2020, so that picture of student debt is, and the tuition amounts, are skyrocketing over the last several decades. What is it that you would like to see – whether it’s the White House or Congress – do to try and bring those costs under control so that students aren’t put in the position of needing to borrow as much?

PERRY: Ultimately, we need universal higher education in the same manner as we see it at the K-12 arena. We don’t ask parents to take out a loan to attend an elementary or secondary school, and we shouldn’t ask it for certain public institutions. A higher education is as basic as an elementary or secondary education nowadays. Society needs its populace to be more highly educated. That’s a fact. And so we need a system that treats it as much.

Our public sector is moving in that direction anyway. Because of the Pell Grant, which is roughly around $6500 dollars, and because of state subsidies, many community colleges across the country are free anyway, because it covers the cost of entrance. We need to expand that to our four-year publics. Certainly our privates will be wrangled by that, but the reality is that private institutions are 75 percent more expensive than public institutions, and we have a cost-containment mechanism in the public sector. We have legislatures that have kept the rising cost of tuition in check, so we just need to move to what we call a free college system where the cost of attendance is covered by those subsidies. And if we do that, I think we’ll ultimately eliminate the need to take out loans.

PITA: All right, Andre. Thank you so much for talking to us and explaining this today.

PERRY: Yeah, Thanks for having me.

Are we at a crisis point with the public teacher workforce? Education scholars share their perspectives

The Value of Federalism for Our Freedom

An unequal embrace of digitalization may contribute to recession risk