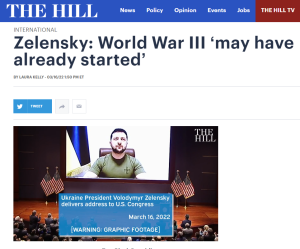 It seems as if everyone is supplying Ukraine with money and weapons. I would not blink if I saw Russia itself had provided Ukraine with weapons as everything has become so absurd. Yet, nothing seems to be enough. Ukrainian Foreign Minister Dmytro Kuleba called out the two European countries that have not supplied weapons for the proxy war. “With the exception of Hungary and Austria, the supply of weapons to Ukraine is not a taboo for any other European country, although it was (before),” said Kuleba.

Levente Magyar, Hungary’s Deputy Minister of Foreign Affairs, explained their reasoning for staying neutral. “Unlike many Western partners, we have experienced for ourselves what it is like to confront this huge Eastern state. At the same time, Hungary itself will not supply weapons — this is our strategic position. However, third countries can use our territory,” Magyar noted. Hungary simply does not wish to engage in war with a large Eastern power. They are protecting the Hungarian population living in the far-western Transcarpathia region from Russian attacks.

Austria has also committed to neutrality and has made that clear since the beginning of the war. First, Austria is not officially a NATO country and does not have that protection. According to Al Jazeera, 80% of Austrians do not want any involvement in the Western alliance. We all know of a certain dictator who grew up in Austria and started the last world war. Austria attempted to act as a diplomat between the East and West, with Chancellor Karl Nehammer visiting Moscow earlier in the year. The trip produced no results.

Both nations have offered humanitarian resources or opened their borders to Ukrainian refugees. They should not be shamed for steering clear of war. Look at their not so distant histories. The oldest generations have experienced untold suffering. There is no benefit for either country to become involved in a growing global conflict.

The Rise of ESG, Replacing Profits with Paternalism, and Strategy with Standards

Data misuse and disinformation: Technology and the 2022 elections

Critique of “What Economics Can Tell Us About Mandating Vaccines”