Is abortion policy pushing Latinos back towards the Democratic Party? 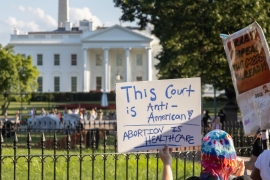 With the 2022 midterm election fast approaching, the Latino electorate has again emerged as a critical factor in deciding whether Republicans will take over control of Congress. Often referencing Trump’s improved performance with Latino voters in 2020 relative to 2016, several op-eds and news stories have suggested Republicans are poised to continue racking up gains among Latino voters.

The recent release of the UnidosUS/Mi Familia Vota National Survey of Latino Voters fills this gap with the necessary data to provide some fresh perspective to the discussion of how Latinos will vote in 2022. The large sample of 2,750 registered Latino voters also has oversamples of Latino voters in several key states where they will have a great impact.

In an earlier post, we suggest that the Dobbs decision appeared to generate more enthusiasm among voters to vote for Democrats rather than Republicans based on national polling at that time, but we could not speak to any specific racial or ethnic group due to data limitations. The new survey data allows for a more focused analysis of Latinos.

Let’s start with issue saliency, or how important abortion policy will be for Latino voters, relative to other policy issue areas. One of the most important findings from the new survey is how much abortion has emerged as a top policy priority for Latinos. Abortion was identified by 19 percent of the national sample to be one of the top “issues that elected officials should address,” just behind economic issues, gun violence, and healthcare and significantly higher than immigration policy. Casual observers may not catch just how significant the increased prioritization of abortion policy among Latino voters is, but this is a major shift in Latino public opinion. As recently as 2020, abortion was only identified by five percent of Latinos as one of the most important issues to address.

When asked what they meant when they identified abortion policy as one of their top priorities, the most common response was “banning abortions puts women’s lives at risk,” totaling 69 percent—followed by concern that other laws restricting access to reproductive health would be passed (58 percent) and that “states will ban abortions” (43 percent). There was a much smaller percentage who indicated that they meant “abortion should be illegal in all cases” (16 percent) or that they “want elected officials in their state to implement and enforce a ban on abortions” (11 percent). The rise in issue salience appears to be driven by fear of the consequences associated with the recent SCOTUS decision.

The  UnidosUS/Mi Familia Vota National Survey of Latino Voters suggests the issue’s increased relevance has the potential to help Democrats improve upon their 2020 performance with Latino voters, as 59 percent of Latinos who identified abortion as one of their top priorities felt Democrats would do better on this issue compared to only 11 percent who thought Republicans would be more well-suited. As reflected in the figure below, the Democratic advantage on abortion is greater than for any of the other top priorities of registered Latino voters, including the economic issues where there is a much more balanced split across both major parties.

This split may be surprising to some given the role of Catholicism in Latino voting behavior. However, despite conservative views on abortion among Latinos in years past, more than half of survey respondents said they did not want elected officials to pass restrictions on the procedure, compared to 16 percent who said abortion should be illegal in all states. This data points to a rather remarkable shift in abortion policy attitudes among Latinos.

Latinos are not a monolithic electorate, so there are naturally some important distinctions to note from the data. For example, Latinos in Florida are less likely to believe that there should be open access to abortion, and Latino males have more conservative views on abortion compared to Latinas. However, arguably the most important finding from the new survey is that Latinos across all sub-groups believe that abortion should remain legal, no matter what their own personal beliefs on the issue are.

Abortion policy will only be part of the story that determines how Latinos will vote in 2022, but this survey suggests that it will play a much bigger role in that story following the Dobbs decision. The president’s approval rating among Latinos (52 percent in this poll) is not stellar, and, according to the poll, the strength of Latinos’ relationship to the Democratic party is quite frail. However, the potential for abortion policy to help Democrats hang on to their advantages in Congress is a surprising source of optimism for those hoping to see the Biden administration implement their policy agenda.

Australia and India Form an Alliance to Lessen Reliance on China