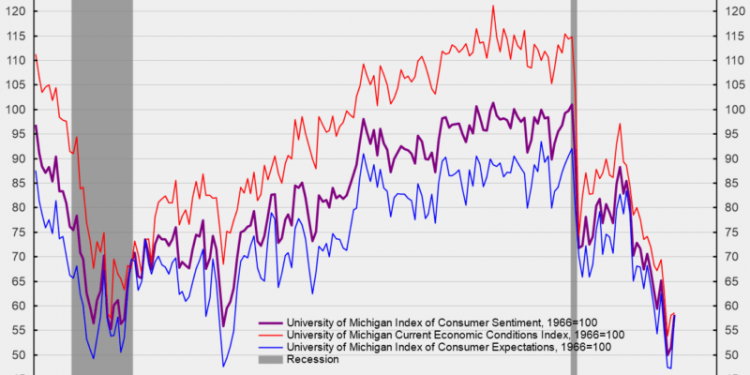 The final August results from the University of Michigan Surveys of Consumers show overall consumer sentiment improved versus the prior month but remains very low by historical comparison (see first chart). The composite consumer sentiment increased to 58.2 in August, up from 51.5 in July and the record low of 50.0 in June. The increase in August totaled 6.7 points or 13.0 percent. However, the index remains consistent with prior recession levels.

The current-economic-conditions index rose slightly to 58.6 versus 58.1 in July (see first chart). That is a 0.5-point or 0.9 percent increase for the month. This component is modestly above the record low and remains consistent with prior recessions.

The second component — consumer expectations, one of the AIER leading indicators — gained 10.7 points or 22.6 percent for the month, rising to 58.0 (see first chart). Despite the gain, this component index is also consistent with prior recession levels. According to the report, “Most of this increase was concentrated in expectations, with a 59% surge in the year-ahead outlook for the economy following two months at its lowest reading since the Great Recession. In addition, personal financial expectations rose 12% since July. The gains in sentiment were seen across age, education, income, region, and political affiliation and can be attributed to the recent deceleration in inflation. Lower-income consumers, who have fewer resources to buffer against inflation, posted particularly large gains on all index components. Their sentiment now even exceeds that of higher-income consumers, when it typically lags higher-income sentiment by over 15 points. Hopefully, this tentative improvement will continue, as overall sentiment remains extremely low by historical standards.”

The one-year inflation expectations fell notably in August, dropping 0.4 percentage points to 4.8 percent. That is the third decline in the last four months since hitting back-to-back readings of 5.4 percent in March and April and the lowest reading since December 2021 (see second chart).

The five-year inflation expectations was unchanged at 2.9 percent in August. That result is well within the 25-year range of 2.2 percent to 3.5 percent (see second chart).

The report states, “The relative relief felt by consumers reflected in their inflation expectations. The median expected year-ahead inflation rate was 4.8%, down from 5.2% last month and its lowest reading in 8 months.” However, the report adds, “Uncertainty over expectations rose considerably, particularly among lower-educated consumers.” The plunge in consumer attitudes over the past year reflects a confluence of events with inflation leading the pack. Persistently elevated rates of price increases affect consumer and business decision-making and distort economic activity. Overall, economic risks remain elevated due to the impact of inflation, an intensifying Fed tightening cycle, and continued fallout from the Russian invasion of Ukraine. As the midterm elections approach, the ramping up of negative political ads may also weigh on consumer sentiment in the coming months. The overall economic outlook remains highly uncertain. Caution is warranted.

Do They Not Know?