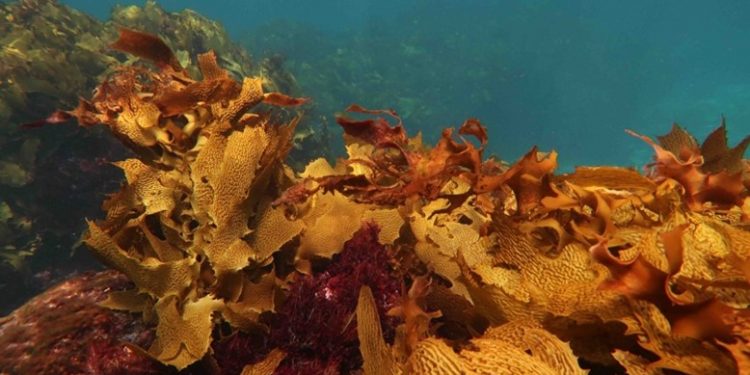 In our latest post, Felipe de Vargas Ribeiro presents his latest article “Shield wall: Kelps are the last stand against corals in tropicalized reefs.” He discusses his group’s results from studying Australian Kelp forests, the importance of biotic interactions in novel communities, and encourages his Brazilian fellows to endure in science.

Coastal ecosystems provide food and shelter to many species, along with invaluable services to human populations. However, ocean warming, and extreme climatic events jeopardize both the form and function of such systems due to direct effects on foundation species, such as kelps. Kelp forests are broadly distributed in temperate reefs, where they mediate key ecosystem functions and participate in climate mitigation as significant carbon sinks. In Western Australia (WA), the southward-flowing Leeuwin Current carries warm-affinity species down to temperate reefs. Once there, they establish new populations far away from natural enemies and predators. Temperate communities then become “tropicalized”, with tropical reef fish tearing entire kelp forests down to turfs and kelps being replaced by tropical seaweeds and corals. Such reconfiguration of the ecosystem is quite evident in biogeographic transition zones—such as the mid-west section of the WA coastline—where kelp forests are progressively thinner.

The emergence of such “novel ecosystems” has become a global symptom of climate change as it has been reported in several locations around the world. At present, we are still learning the specific mechanisms responsible for the replacement of species at the community level. Ecological interactions govern several processes, including the shape of marine communities as to which species are there, how abundant they are, and where they live in the reef. Golden kelp (Ecklonia radiata) is a major habitat provider from the eastern to western temperate reefs of Australia. Due to its thick and flexible architecture, this kelp moves with the waves and scours the ocean floor. Kelp forests have been progressively retracting southward, while some coral species are increasing in abundance. Based off of our understanding of these ongoing changes, the main question in our study was: Are corals being released from competition with kelps following climate driven die-offs?

From previous surveys and field observations, we noticed that the understory community of kelp forests was lacking corals. Although, some co-occur cryptically within kelp patches, in crevices, and in overhangs. It seemed likely that kelps were excluding corals from the perimeter and keeping seaweeds instead. The temperate coral, Plesiastrea versipora, increased in abundance in the mid-west section of WA after a marine heat wave in 2011, along with the successful colonization of several other warm-affinity species. In the same period, it was reported that E. radiata forests were progressively thinner toward northern sites. Thus, one could certainly be led to believe that both events were somehow connected. To confirm that assumption, we designed a distinct methodology combining surveys and manipulative experiments, including the measurement of physical disturbance (i.e., tilt) by kelp. We had to increase the resolution over the abrasion mechanisms and the relationship between coral abundance and algal canopies. To capture the abrasion effect, we exposed coral colonies individually and built physical barriers using conical fences as controls.

We found that P. versipora abundance increased sixfold in one decade, and coral counts were lower near kelps compared to substrates colonized by other species of macroalgae. Corals which were experimentally exposed to kelp whiplash in the field had their soft tissue brushed off their calcareous skeleton within days. As many sessile species have soft tissue constituents, kelp abrasion actively selects the understory community—like trees in tropical forests—but they do so by removing corals that are more susceptible to physical damage from the whiplash, and by limiting the development of colonial organisms. Evidently, kelps are even more important as keystone species in their ecosystems than we previously thought. Their active abrasion of the substrate affects the biodiversity within the canopy and regulates species interactions on coastal reefs. Besides their imperative roles in the production and exportation of organic matter and habitat provision, they also mediate processes at the community level that may unfold to the entire ecosystem.

Corals and kelps usually occupy distinct latitudes, although they may co-occur in some places. Corals are the dominant species in tropical reefs, whereas kelp forests cover the seascape in temperate systems. Until the present article, only one study in the North-eastern Pacific looked closely at the interaction between these two organisms and the abrasion effect from kelps over cup corals. In most encounters, either the kelp or coral is the dominant species and habitat provider. In tropicalized reefs, warm-affinity species keep pushing kelp forests poleward leading to coral dominated phases; therefore, these “new” interactions are now between dominant habitat providers competing for space. The novel aspect of our study was our assessment of the mechanism by which the dominant kelp species is gradually replaced: temperature driven die-offs and no substrate brushing by kelp, thus leaving corals and other seaweeds free to colonize.

Figure 4. Coral colony fixed under the canopy and fenced against abrasion by kelp in field experiment (credit: Felipe Ribeiro)

The emerging importance of biological traits and species interaction is contributing to a reframing of the understanding of climate driven perturbation in marine forests. The effects of the removal of apex predators and microbial degradation on ecosystem function are well documented, but the ecological roles of species interaction in mediate phase shifts are complex and hard to prove.

Manipulative experiments in the field have many obstacles to overcome such as weather, logistics, manipulation of target species, and testing whether the materials and equipment are up for the task.  My friend (best dive buddy ever!) Yannic and I became specialists of warehouse stores at some point! In our study we had to test different ways to install the experimental units so that they could endure incoming storms. It took a few pilot studies to finally conceive a weather-proof design while controlling for shading, flow, and abrasion exposure artefacts. Drilling holes in limestone in order to fix the coral tiles was very challenging—every bolt in was a victory! But the Wernberg lab team was brave, and with the help of my Spanish brother Albert, we finally got it done! Surprisingly, we had a strong abrasion effect on the tiles, thus we settled for the final design. It was amazing that some parts of the substrate beneath the kelp were completely whipped-off and clean of sediment particles, leaving only bare coralline algae (CCA) crusts.

The coastal reefs of WA have variable substrates like sandstone, limestone, and some rocky sites. The calcareous framework of most has a significant cover of CCA—a known attractor of coral larvae. In this study we shed light on a single mechanism that might contribute to phase shifts in a warming ocean environment. However, there is still a lot to investigate regarding the role of other algae species in coral settlement. Would they have synergistic effects with CCA and end up attracting more corals, or will they become an interference in habitat cues for larvae? When it comes to novel interactions, how will the new settlers interact with local competitors and consumers? How will they change the fluxes of energy and materials? What about the consequences related to the lack of substrate brushing by kelps to their own life cycles, if kelp thinning does not slow down? These are a few of the remaining questions that I believe are worth tackling so we can increase stewardship in the face of Earth’s current environmental challenges.

I became hooked in marine biology at a very young age after spending some hours playing around with sea urchins. Then came the series of Jacques Costeau books and my first dive mask which opened a whole new world for me. I am interested in how marine species interact with each other, especially those living in reef ecosystems. Consequently, my scientific curiosity took me to many places around the world including coastal reefs in California, the Baltic Sea in Germany, and, recently, Thailand and the temperate reefs of Western Australia with Professor Wernberg. Currently, I live in Niterói, my birth city, across the bridge from Rio, where I hold a temporary position as Professor of Marine Ecology at Universidade Federal Fluminense, Brazil. I am passionate about the ocean; if you happen to pass by Guanabara Bay in Rio, you will probably see me paddling the Va’a canoe in early mornings or during dazzling sunsets.

Marine ecologists love the underwater realm like no other person. Some sightings still come to my mind as I literally dove into the kelp forest. I was amazed by how much biodiversity is hidden within the kelp canopy and its surroundings. There are so many colors and life forms in a single plot that it felt like I was looking through Haeckel’s art books. You can find yourself entranced by the beauty of kelp forests, only for your gear to then be carried away by a curious seal! It might be that you are focused on your survey and your buddy gives you a sign that there is something big like a sea lion or shark hovering over you. Later on, when you are processing the data, spending countless nights in the lab and persisting to finalize your manuscript, you recall the wonderful memories of your time spent in the field and realize that being an ecologist is worth it!

My advice for other ecologists—especially for my Brazilian colleagues and students—comes from something that I learned while observing reef organisms recovering from high temperature anomalies: be resilient! Just like marine heat waves, bad administrations will eventually pass. Even though we have limited access to funding—due to ever-shrinking science budgets and PhD students living with 22-38% of the stipend given to candidates of other Western countries—we’ll keep on moving…just like kelps with the waves!

How we can regulate stablecoins now—without congressional action

Nosy predators check out the competition

Nosy predators check out the competition