Are Americans finally ready for a Third Party? 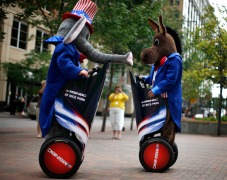 Are Americans finally ready for a third-party? Andrew Yang, a former candidate for the Democratic presidential nomination, and Christine Todd Whitman, a former Republican governor of New Jersey, certainly think so. They have just founded the Forward Party with the avowed aspiration of promoting more moderate politics and candidates.

They have some evidence to back their hopes. In a just-released survey, the Pew Research Center found that the share of voters with an unfavorable view of both political parties has risen from 6% in 1994 to 27% today. When asked to respond to the statement that “I usually feel that there is at least one candidate who shares most of my views,” 43% disagree, up from 36% in 2018. Thirty-eight percent strongly agree that “I wish there were more political parties to choose from in this country,” a figure that includes 48% of Independents and 38% of Democrats but just 21% of Republicans.

This final finding is one of several replicated across all the surveys in this article. Democrats and Independents are much more dissatisfied with the current party system than are Republicans, and young adults are far less satisfied than are older Americans. (In fact, discontent decreases steadily with age.) In addition, some surveys suggest that there is more openness to a new party among college-educated than non-college voters—and that Hispanics may be less tethered to the current party system than are either whites or African Americans.

A Gallup survey released last year points in the same direction. In 2003, 56% of voters believed that the two existing parties did an adequate job of representing the American people. By 2021, this figure had dropped to 33%, while the share who thought that a third major party was needed to achieve adequate representation had risen from 40% to 62%.

A recent USA Today/Suffolk poll adds an interesting refinement to the Gallup finding. When respondents were asked whether the two existing parties were adequately representing Americans’ views, only 25% said that two parties are good enough, and 26% said that a third party is necessary. But 34% said that “multiple” new parties are needed to represent Americans’ views.

Political science research shows that this third group is correct. If the United States had a parliamentary system, we would have at five distinct blocs of voters—roughly speaking, a progressive Sanders/AOC party, a center-left Biden party, a centrist/business-oriented Bloomberg party, a traditional-conservative Pence party, and a conservative populist Trump Party. Voters who give priority to climate change might organize a sixth “Green” party, as they have in Germany and elsewhere.

We don’t have a parliamentary system, of course, and we aren’t likely to move toward one any time soon. We have an entrenched two-party system whose first-past-the post voting rules discourage new entrants, and polarization has reinforced partisan identification as a key determinant of voters’ preferences.

Nonetheless, it’s clear that discontent with our party system is at its highest point in decades—and that much of the discontent lies in the center of the electorate. Unless public sentiment changes significantly, moreover, a 2024 rematch between Joe Biden and Donald Trump would feature two of the least popular presidential candidates in modern history—even within their own parties. Forty-three percent of Democrats say that Biden shouldn’t run for a second term, and 38% of Republicans say the same about Trump. If 2024 were a rerun of 2020, 58% of voters say that they would “consider” a “moderate independent” presidential candidate.

Skeptics will point out that there’s a lot of daylight between considering and actually voting for a candidate—and that the history, character, and policies of this unnamed moderate independent would make a huge difference in a presidential contest. Older voters, who are much less open to this possibility, are much more likely to vote than are younger, more supportive ones. And a lot can change in two years.

The thought of a third party is, as shown, attractive to many in theory at least. But before signing up it is important to take note of a structural asymmetry in the current party system: Democrats are far less satisfied with their party than are Republicans and are more willing to consider alternatives to it. Here’s why: three-quarters of Republicans identify as conservative or very conservative, compared to only one-half of Democrats who consider themselves liberal or very liberal. A centrist independent or third-party presidential candidate probably would draw more heavily from the Democratic nominee than from the Republican. And because presidential elections have been so close in recent decades, the asymmetrical effects of an independent or third-party candidacy could well prove decisive in returning Donald Trump to the Oval Office—unless such a candidacy made history by triumphing over both the existing parties. But despite today’s high level of discontent with these parties, the odds against this outcome remain dauntingly high—and the consequences of failure could be catastrophic.

How can democracies harness technology to promote inclusive economic growth and development?

In Bernanke We Trust?