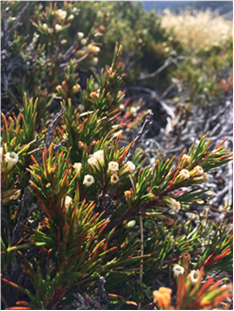 Who would have thought that it is possible to get funding to torch dried plants on a grill, for science! The results are now in a scientific journal, contributing insights regarding the evolution of flammability in plants.

My 8-year-old self would have been delighted, that is for sure. Then I was already very interested in biology. I also had some ‘slightly’ pyromaniac tendencies. I conducted my own ‘research’ on the flammability of various household materials, such as cardboard, candles and scrap wood from my dad’s workshop in the basement.

My parents were probably a little too tolerant in this regard. They provided me with a relatively safe ‘lab’ environment that basically consisted of an inflammable tray, made of aluminium. This I could deploy in the garden to conduct my rather opportunistic experiments. My parents watched cautiously with a bucket of water in reach.

Luckily, everything turned out well, I did not burn down our house or anything of significance and instead grew up to focus on Biodiversity, Ecology and now Nature Conservation during my time at school and university. The only relic of my childhood experiments is a propensity to seek out excuses to (safely) ignite a campfire while hiking, to hone my caveman skills and to ‘impress’ my friends.

This brings us to the recent publication of Xinglei Cui et al., that was published earlier this year in Forest Ecosystems. Xinglei is a former PhD student on plant flammability at Lincoln University – now working at Sichuan Agricultural University, in Chengdu, China. He worked in collaboration with other researchers from China and New Zealand, among them LU’s Adrian Paterson, Kate Marshall and Tim Curran.

Xinglei wanted to solve the question of whether the presence of different environmental conditions (for example altitude above sea level) could explain differences in the flammability among individuals of the common grass tree or inaka (Dracophyllum rosmarinifolium). This plant was chosen since it occurs throughout the South Island and can live in very different habitats, from rocky slopes to plateaus and valley floors. Inaka also shows diverse shapes and sizes – a lot of variability among the same species.

Previous research, mostly focused on relating flammability of plants to fire frequency in their natural range, showed that species like gorse become more flammable when there are more fires. This has inspired macabre sounding hypotheses such as ‘kill thy neighbour’ or ‘born to burn’, and other good death metal sounding titles! While this might sound contradictory, some plants take an evolutionary advantage from being highly flammable, if being flammable kills your neighbours and provides open space for your pyromaniac offspring.

Coming back to our grass tree, we are not sure how flammability evolves without the regular presence of wildfires, like in New Zealand. This question becomes especially relevant considering rising temperatures and weather that becomes more and more unstable through climate change. Areas of the world are now burning where fire used to be rare. Answering this question could help to understand where and why the risk of wildfires could be higher in regions of New Zealand that experience increasing periods of ‘wildfire weather’ conditions.

Grill similar to the one used for the project, Photo CC BY 2.0 by Liz West, Flickr

To test this, the researchers had the chance to use a device that looks suspiciously like it could be used for a nice barbecue after finishing the scientific experiments. Not only does it feature a regular gas burner, but also an awe-inspiring blow torch, based on the design of an older publication and adapted to New Zealand safety standards by Sarah Wyse in 2016. Shoot samples from eight different South Island locations, each with different environmental and habitat conditions, were tested regarding their burning qualities. After 24 hours of air drying, they were preheated for 2 minutes before trying to set them on fire. Then, duration, temperatures and the amount of the plant that got burned in the process were measured – what a task!

Flammability among plants from the eight locations varied a lot, although every single sample caught fire. The sample from Mt Arthur in the north of the South Island was most flammable, while individuals from the Homer Tunnel in Fiordland were least flammable. However, the influence of the habitat conditions from those eight sampling conditions turned out not to be related to the flammability of the grass tree.

What do these results tell us about the evolution of flammability in the common grass tree, if environmental conditions don’t seem to have an effect on it? Xinglei and his colleagues concluded that flammability of this plant is more likely to be a by-product, an indirect result in the evolution of other characteristics of this plant, since it grows – in areas without a natural wild fire regime.

In any case, the authors highlight that it is important to continue this type of research to understand and manage the risk of wildfires in light of climate change. This may help us to understand where wildfires are likely to occur in New Zealand and to react and plan accordingly. Many further questions have to be solved. For example, is the current flammability of the grass tree passed directly on to the next generation and why are flammability traits so different among individuals of the same species.

There are many more projects to come and more importantly, many chances to safely live out your pyromaniac tendencies! I’m keen, and I have my own tray!

This article was prepared by postgraduate student Jan-Niklas Trei as part of the ECOL 608 Research Methods in Ecology course in her Master of International Nature Conservation degree.

The COVID pandemic and the federal budget