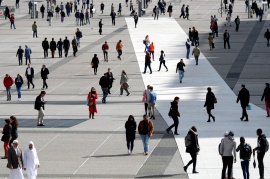 By Beyond Deng, Richard V. Reeves

This week in Class Notes:

Couples like to do things together in the home, but togetherness may reinforce the gender pay gap

Couples often do things together within the household, but traditional economic models typically treat time inputs as individual ones and take no account of the value of joint activities. Sam Cosaert, Alexandros Theloudis, and Bertrand Verheyden develop a new theoretical framework to address this gap in the literature. Using Danish data from 2009 to 2012, they find that on average, households are willing to pay on average 17% of their hourly wage to convert an hour of separate, private child care into a joint activity. For joint leisure, they are willing to pay 10% of their wage. Joint child care is more expensive because it comes at the expense of both a loss of flexibility in the labor market and a loss of specialization in the household. Women are usually the ones who forgo work flexibility in order to increase household togetherness, however – and this can reinforce the gender pay gap.

Good schooling increases knowledge and develops skills. But it can also improve cognitive endurance, which Christina L. Brown and her colleagues define as “the ability to sustain effortful mental activity over a continuous stretch of time.” This is useful not only in school, but also in the labor market. What can improve this ability? The research team studies two approaches with a randomized field experiment among low-income primary school students in India. The first sub-treatment group did more sustained work on math problems, while another sub-treatment group spent a similar amount of additional time on non-academic, but stimulating games. Over six months, both treatment groups improved their cognitive endurance by 22% relative to the control group. The gain remains 3-5 months after the intervention. In practice, this means that students were able to pay more attention in class and do better overall in terms of academic outcomes. The authors also show, drawing on separate data from Pakistan, that an extra year of schooling can improve cognitive endurance – but only in higher-quality schools. One way in which inequality of school quality impacts on long-term outcomes is through differences in the development of this “core mental skill.”

The Black-white wealth gap narrowed sharply after Emancipation, and steadily through the 20th century, but progress has stalled and is likely to reverse

There is an extensive literature on the current racial wealth gap. But Ellora Derenoncourt and her colleagues have constructed a continuous time series of white-to-Black per capita wealth ratios in the United States stretching back over the past 160 years. In 1860, the white-to-Black per capita wealth ratio was 56:1, but fell to 23:1 by 1870, after Emancipation. Black and white wealth levels continued to converge in the late 19th and early 20th century, albeit at a slower pace. Black and white wealth levels converged at an annual rate of 1% from 1930-1960, for example, and 1.5% from 1960-1980, at which point the ratio had fallen to 6:1. Since then, however, the gap has been unchanged – and in fact has even widened in recent years (largely because of differences in capital gains). This gap is now likely to widen again, the authors conclude: “Given current differences in wealth-accumulating conditions, our model predicts that…by 2200, the gap will increase by more than 50%, reaching a level of 8.4:1. In the absence of policy interventions leading to improvements in the relative wealth-accumulating conditions of Black Americans, wealth convergence is not only a distant scenario, but an impossible one.”

In 1980, Organization for Economic Co-operation and Development (OECD) countries with higher female labor-force participation rates had lower fertility rates. This pattern had reversed by 2000, with fertility higher in countries where more women were working.

“Last month, a group of House Republicans introduced a bill that would allow states to keep 25% of any recovered funds from Covid programs so long as they directed it toward improving their unemployment systems and administration. This approach would have two benefits. It would finally offer states a real incentive to track down misappropriated federal funds, and it would help address glaring weaknesses in the US unemployment system… Any big federal outlay will lead to attempted scams and swindles. Yet even by government standards, the sheer scale of Covid fraud has been remarkable. Congress owes it to taxpayers to find out what went wrong — and to recoup as much of their money as it can,” write the editors at Bloomberg.

Self-promotion: Wealth mobility in the United States is limited, especially among older workers

“The combination of increasing wealth inequality and poor prospects for upward mobility create sharp class divides which are at odds with the American dream,” write our colleagues Ember Smith, Chris Pulliam, John Sabelhaus, and Ariel Gelrud Shiro. They show that during the prime working years, relative wealth position does not change very much. Half of those in the bottom wealth quintile in their early thirties are still there in their late fifties, while half of those who start in the top quintile stay there. When mobility does occur, it happens more likely in the earlier decades of working life. Tackling disparities in wealth accumulation point to policies such as “targeted home ownership subsidies, individual development accounts, and matched savings plans,” as the authors suggest.

For your calendar: Conferences on the economics of social security, children, and the influence of gender norms in the economy.

SI 2022 Gender in the Economy: Change and Persistence of Norms

Senegal’s democratic backsliding is a threat to African democracy

Looking beyond borders to understand impacts of science on society